“THIS IS STRICTLY DUE PROCESS”

(Oct. 21, 2015) — On October 20, 2015, a document was posted at pacer.gov in the case of Melendres, et al v. Arpaio, et al titled “Notice of Partial Compliance with Subpoena Served on and Lack of Authority to Accomplish Additional Production from Michael Zullo.”

Submitted by counsel representing Sheriff Joseph M. Arpaio‘s office, the document states that more than 3,500 pages of documentation were provided by Maricopa County Cold Case Posse lead investigator Michael Zullo in response to a subpoena from the plaintiffs’ attorneys.

The Melendres case was filed on December 12, 2007 by several Latinos who claim that the sheriff’s office unfairly targeted them during traffic stops.  It has been presided over by U.S. District Court Judge G. Murray Snow since July 22, 2009 after Judge Mary H. Marguia recused herself for conflict of interest at the defendants’ request.

In early May, the defendants requested that Snow recuse himself after court testimony revealed that a constituent had informed Arpaio that Snow’s wife had commented to her in a restaurant that her husband disliked Arpaio and wished to see him defeated in his next re-election bid.

Snow has not recused himself, nor has he denied having made the comments to his wife.  He also presided over a 2010 lawsuit brought by the U.S. Department of Justice against Arpaio which was settled out of court.

Snow was assigned to Melendres by “random draw,” according to Pacer’s itemization of activity in the eight-year-long case.

In May 2012, the Justice Department filed a civil lawsuit against the Maricopa County Sheriff’s Office (MCSO) which has largely been settled without a trial.  The department’s criminal probe into whether or not Arpaio had abused the power of his office was quietly closed in late August of that same year due to an apparent lack of evidence.

The Maricopa County Cold Case Posse is not a defendant in the case. As one of many volunteer posses assisting the sheriff in various areas of law enforcement, the Cold Case Posse has conducted investigations into old, unsolved cases since its inception in October 2006.  Its funding is provided by donations from the public rather than by taxpayer dollars.

For the last four years, Zullo has led the posse in a criminal investigation into the long-form birth certificate image posted on the White House website on April 27, 2011. On March 1, 2012, following approximately six months of investigation, Zullo and Arpaio gave a press conference during which they announced that they had found probable cause to believe that the image at whitehouse.gov was a “computer-generated forgery.”

They also revealed that they believed the same to be true of  Obama’s purported Selective Service registration form, which had been mailed by the Selective Service System to various members of the public requesting it through the Freedom of Information Act (FOIA).

In December 2011, Snow ruled that the MCSO could not detain individuals based solely on the suspicion that they were in the county, and country, illegally.  Snow also broadened Melendres to a class action suit to encompass “All Latino persons who, since January, 2007, have been or will be in the future, stopped, detained, questioned or searched by MCSO agents while driving or sitting in a vehicle on a public roadway or parking area in Maricopa County, Arizona.”

In March of this year, Arpaio admitted to having failed to adhere to all of Snow’s orders in Melendres and offered to make restitution in the amount of $100,000 out of his personal funds to the plaintiff class.  Snow declined Arpaio’s offer and scheduled a bench trial which began on April 21.

On April 23 and 24, respectively, Snow questioned Arpaio and his chief deputy, Gerard Sheridan, about a criminal investigation involving a confidential informant, Dennis Montgomery.  In his testimony, Arpaio stated that Zullo had been a party to Montgomery’s project.

Referring to a June 4, 2014 article from the Phoenix New Times, a publication openly hostile to Arpaio, Snow asked if it were true that Montgomery’s work involved an investigation of himself, any of his family members, or an alleged “conspiracy” between the DOJ and Snow in order to damage Arpaio.

Although Sheridan and Arpaio answered in the negative, indicating that Montgomery’s efforts were directed toward a government breach of federal judges’ email accounts, MCSO phone lines, and tens of thousands of Maricopa County residents’ bank accounts, Snow demanded that hard drives, emails, and other work product of Montgomery’s be turned over by the MCSO to U.S. marshals, the court, and monitor Robert Warshaw, who Snow installed in January 2014 as a result of a ruling that Arpaio’s office had violated the constitutional rights of certain Latino citizens during traffic stops and immigration sweeps.

Arpaio appealed the ruling to the Ninth Circuit Court of Appeals, which largely upheld Snow’s decision but clarified that Warshaw’s role should be limited to overseeing the correction of any constitutional violations committed by the Sheriff’s office.

Snow is now reviewing, approving and ordering the monthly invoices from Warshaw & Associates to be paid by the county.

Last month, Zullo was subpoenaed by the plaintiffs’ attorneys to provide depositions beginning on October 7; however, his request for more time to prepare was granted through October 23.

The text of the filing from Arpaio’s three attorneys reads: 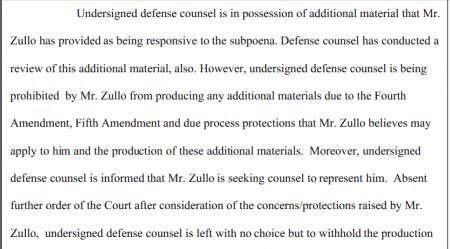 On Wednesday afternoon, The Post & Email contacted Zullo for a statement on the filing, to which he responded:

Don’t misconstrue this with any wrongdoing or smoking gun.  This is strictly due process.