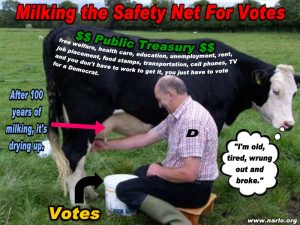 (Oct. 4, 2015) — Just recently we received the State Audit Report on the Workforce Development System for the State of Washington. Reading it makes one to want to stomp on it, set fire to it, pour acid on it and go get the guys and gals that dream up such worthless, money-sucking nonsense. The annual budget for this state program (remember, this is just a program for one state) is over $1.1 Billion, a good portion of which comes from the federal public treasury and the rest of it is paid for by state taxpayers.

In the executive summary, the report states:

“The workforce development system in Washington is a complex network of 55 programs and multiple service providers, serving hundreds of thousands of job seekers and employers at a cost of more than $1 billion a year in federal and state funds. The system is complex because it serves a wide variety of people with vastly differing circumstances. It takes a coordinated effort among many program partners – at state agencies, school districts, community and technical colleges, local Workforce Development Councils, and community-based organizations – to develop a skilled workforce able to meet the diverse demands of business and industry in Washington.”

“To succeed, the system must effectively prepare individuals for the job market, by offering training for occupations in demand, and job preparation and support services to help individuals succeed. The system must be sufficiently flexible and comprehensive to accommodate the varying needs of participants and employers.  Effective coordination of service delivery is essential to success, as is employer engagement, particularly at the local level.”

“Our review of the existing system found duplication, fragmentation and overlap of services that are largely justifiable. We also identified risks associated with program coordination and service delivery that may call for further analysis.”

Yes, on the surface, it sounds so noble and worthy. But from the report, evidently duplication, fragmentation and overlap of service is justifiable and OK. Of course it is OK because every government program, federal, state, or local, has duplication, fragmentation and overlap of services. Oh, and their program coordination and service delivery require further analysis. Are you kidding? Only government can get away with this insanity!

Now take this duplication, fragmentation, overlap of services, lack of program coordination and service delivery problems and apply it to every government program anywhere in America. Then think about what it costs for this gross inefficiency and gross negligence, if not outright corruption.

And then there is this. Where is the cost/benefit analysis for this Workforce Development System? How many employees are in the “system”? How many people are getting jobs and how many employees and job seekers are “milking” the system for all its worth? The audit report doesn’t say. Since most government programs are a deep cesspool of waste, fraud, abuse and corruption, the cost versus the benefits for the program are in all likelihood, in the toilet. Democrats never consider costs, only buying votes.

But please note the word “complexity” in the Executive Summary. Complexity is a direct government translation for over paid employees, huge administrative cost overruns, gross inefficiency and a gush of tax dollars to support the whole permanent and perpetual full government employment scheme ….. for Democrats. (Who do you think gets these government jobs?)

The question is, are there that many people out there that are so weak and uneducated (or non-citizens) that the big benevolent government, using your tax dollars, has to step in and lift them up? It goes against every principle of unalienable rights, self-reliance, independence and individual responsibility that used to be the foundation of this once free Constitutional Republic, not to mention the U. S. Constitution.

Ladies and gentlemen, a huge welfare system is the precursor to a government with absolute power ….. the power to take from you by force and give to others for their votes.

As we said, this is just a report from one Workforce Development System for one state. Now multiply this one state by 50 and all of a sudden you are talking real money.

But it doesn’t end at state workforce development. The federal government provides over 80 means-tested welfare programs. “In FY 2011, federal spending on means-tested welfare, plus state contributions to federal programs, reached $927 billion per year. The federal share came to $717 billion or 77 percent; state spending was $210 billion or 23 percent.”

From one reliable source we learned that: “the federal government devotes roughly one-sixth of its spending to 10 major means-tested programs and tax credits, which provide cash payments or assistance in obtaining health care, food, housing, or education to people with relatively low income or few assets. Those programs and credits consist of the following:”

Don’t think for one minute that these programs aren’t available to people who aren’t American citizens because there are several programs in the Washington State “system” that provides for people who can’t speak English.

This theft of trillions of taxpayer dollars from the public treasury (over $22 Trillion since President Johnson’s Great Society) to low-income and illegal aliens is not an accident and it has been growing by leaps and bounds over the last 40 to 60 years when the Democrats learned they could buy votes with taxpayer dollars. Actually, they learned it under FDR when he came along and started providing subsidies to just about everyone, with New Deal programs, Social Security and subsidies for farmers. No wonder so many people still think he was a hero.

Farm subsidies are over 80 years old now. These fraud-prone and corrupt federal farm subsidy programs have been and still are being abused by mega farm companies and everyone in between. In just one state alone, farmers bilked the federal government out of more than $100 million in a decade. People who don’t even own farms and live in a city apartment are making applications for and receiving the $40,000 maximum grant. Many of those getting the grants are from urban ethnic precincts because of a bogus discrimination U. S. Supreme Court decision in Pigford v USDA.

(See: “How Obama Bought the Black and Latino Rural Vote

As further evidence of Democrat collusion for votes, the Obama Administration is directing the Immigration and Naturalization Service to promote and expedite legal Latinos to become citizens of the U. S. so that they can vote in 2016. This is an overt attempt by the Administration to add voters to the Democrat side because they know that Latinos will vote Democrat by large majorities. In the New York Times article about this, “The officials insisted that the effort was non-partisan.” And if you believe that, well …..

Again, as we have said, none of this happens by accident. This is why Democrats resist closing the borders and why they are all for amnesty for illegal aliens. This is why they propose and pass government programs to benefit specific constituency groups ….. for votes. Every recipient of free welfare, health care, education, unemployment, job placement, rent, transportation, cell phones and TV is a vote for a Democrat. They won’t bite the hand that feeds them?

But what is even worse is the weakening of the American human fiber. People who are dependent on others do not feel whole, because the fundamental human trait is to be self-sufficient and independent. Many dependent people become listless, mediocre and self-loathing. They lack purpose and self-worth. These people not only become a drag on society, many become a menace to society and each other. Dependent people, living in inner cities, are hotbeds of unrest and self-loathing. Highly dependent inner cities are where most of the crime occurs.

In this group of dependent people, we do not include those who truly are in need of help and a generous society is eager to see that they get that help. But an adult man or woman who has both arms and legs and a fully functioning brain with a high school education should not need or require help. If there are too many of these people, then society and government have failed them and have imperiled all of our liberties.

Unfortunately, because of this milking of the safety net by the Democrats, the Republicans will continue to lose ground to the plurality of votes bought off by Democrat-sponsored programs and we will eventually arrive at an Absolute Democrat Monarchy, if we aren’t there already.

In fact, right now, the Republicans in the House and Senate are gearing up for a budget battle with the Democrats. The Democrats have vowed to stop any attempts to reduce spending for entitlements because entitlements are where 90% of the Democrat votes exist. But it is runaway entitlements that have broken the back of America, sucked the spirit of her people dry and made America weak.

Ladies and gentlemen, a string, a wire, a chain, or a country are only as strong as their weakest link. The more people become dependent on government, the weaker the country becomes and the stronger the government becomes. We were stronger as a nation when the people were stronger, self-reliant and independent. Unfortunately, because the Democrat party is obsessed with staying in perpetual power by buying votes with our money, our nation grows weaker by the day. It is left up to the self-reliant and independent to stop the avalanche of bought-off voters. The question is, can it be done peacefully?

Yes, Boehner is quitting, the Pope has spoken and everyone is looking for a Messiah to save us from ourselves. But the fact is, we the people have to save us from ourselves. One man can’t do it. It’s going to take millions of us if we hope to reverse the course of 100 years of Progressivism.  At this point, there is some doubt that it can even be done. Scientists will tell you that with current technology it is impossible to stop a Democrat avalanche with so many people dependent on a government that the Democrats have created by bribing the American people with their own money for votes.

Some believe Trump is the answer and maybe he is, but we caution pinning your hopes of restoration of the Republic on just one man. Nevertheless, if you would like to learn more about the real Donald Trump from a neutral perspective, we encourage you to click HERE. This Trump website is provided as a public service by the National Association of Rural Landowners (NARLO), an advocate for the American urban and rural landowner and an unwavering patriot for freedom and liberty.
– – – – – – – – – – – – – – – – – – – – –
NOTE:  The foregoing article represents the opinion of the author and is not necessarily shared by the owners, representatives, employees, or agents of the publisher.

Ron Ewart, a nationally known author and speaker on freedom and property rights issues and author of this weekly column, “In Defense of Rural America,” is the president of the National Association of Rural Landowners (NARLO) (http://www.narlo.org)

an advocate and consultant for urban and rural landowners and a non-profit corporation headquartered in Washington State.  He can be reached for comment at: info@narlo.org.