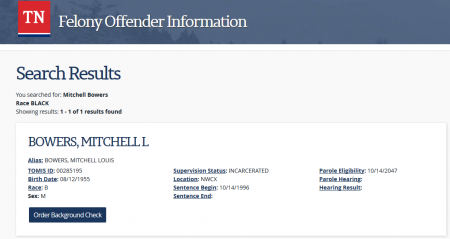 (Aug. 27, 2015) — On Monday, The Post & Email received a letter from Tennessee Department of Correction (TDOC) inmate Mitchell Bowers, who currently resides at the Northwest Correctional Complex (NWCX) in Tiptonville, TN, stating that as a result of improper care on the part of prison staff following surgery last year, he sustained a painful, permanent injury which has rendered him partially disabled.

Bowers was referred to us by inmate Jerome Johnson, who related his own story of forced participation in the Pro-Social Life Skills course just after inmate Walter Francis Fitzpatrick, III reported that he was physically threatened for refusing to take part.

Fitzpatrick has since sent The Post & Email documentation of other inmates’ assignments to classes whose objectives they are unable to achieve.

TDOC Communications Director Neysa Taylor has assured The Post & Email in the recent past that delivering appropriate medical care to inmates is a priority of the department, whose website states that, “The Tennessee Department of Correction (TDOC) has emerged as a model in the nation for its management practices and cost-saving measures since becoming one of the first correctional systems in the country to be fully accredited in 1994. Since that time, each component of the system has been re-accredited in a three-year cycle by the American Correctional Association.”

On Thursday morning, a hearing by a legislative subcommittee was scheduled to take place relating to the widely-reported staffing crisis throughout the Tennessee prison system resulting from mass resignations, discontent with a new work schedule instituted by Commissioner Derrick Schofield, and unsafe working conditions.

The Post & Email has not previously heard from Bowers.  His letter and accompanying medical designation following the surgery are self-explanatory.