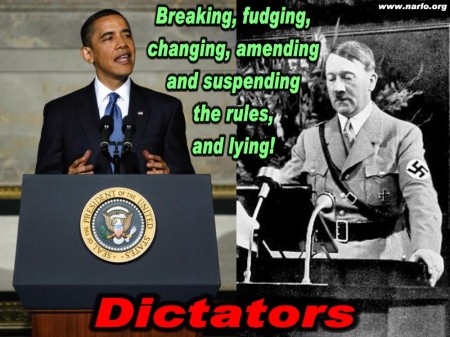 (Aug. 16, 2015) — “Find out just what the people will submit to and you have found out the exact amount of injustice and wrong, which will be imposed upon them; and these will continue until they are resisted with either words or blows, or with both. The limits of tyrants are prescribed by the endurance of those whom they oppress.” — Frederick Douglass, Aug. 4, 1857

Hitler’s rise to power is well documented in history.  The Germans left a paper trail as wide as the infamous Autobahn is long.  Hitler politically fudged the rules, changed the rules, amended the rules, suspended the rules and lied through his teeth to become Chancellor and then Dictator of Germany.  But he went even further with three initiatives that permanently cemented his absolute power.

First, he rammed through the Enabling Act, which suspended the parliament, the constitution and gave the Chancellor absolute power to do anything he wanted on a whim.  Interestingly, he managed to convince the Catholics in power to vote for the Enabling Act if he promised to allow them free rein in the society.  Begrudgingly, they took the word of one of the most evil men in history and voted for the act.  Talk about making a pact with the Devil.

He then, on the “Night of the Long Knives” (June 30 to July 2, 1934), used the military to murder the opposition; in other words, his critics.  Estimates are that at least 85 senior officers and bureaucrats were murdered during those three days, but other estimates put the murders much higher.

Hitler then went on to create some straw men tied to racial and genetic purity and German national pride.  The Aryan Nation (German race) was, according to Hitler, more pure genetically and superior to all other races.  The non-thinking German people bought the propaganda hook, line and sinker.

The first straw men were the Jews.  The Jews were not of Aryan descent and therefore they were the enemy of the German people and had to be exterminated.  Think of it: EXTERMINATED!  The extermination started with the “Night of Broken Glass” (Kristallnacht) (Nov. 9-10, 1938) on Hitler’s command and ended with “The Final Solution,” on Hitler’s command.

(NOTE:  It has been reported that Hitler was a crystal meth junkie and took injections of crystal meth every day to fight his constant depression.  The injections increased as the war progressed.)

Purifying the Aryan race didn’t end there for Hitler.  The sick, indigent, disabled, disfigured and homosexuals were also genetically imperfect and had to be terminated, or could be used for medical experimentation.  One of Hitler’s political enemies who was murdered during the “Night of the Long Knives,” one Ernst Rohm and leader of the German Brown Shirts, was a homosexual.

What may be lost in all this is that the German people were complicit and co-conspirators in the deaths of over 60,000,000 innocents resulting from World War II, another war fought to rid the planet of a megalomaniac, like so many other megalomaniacs in the last 5,000 years who thought they could dominate all the people of the world ….. with brute force.

Nevertheless, you don’t have to use brute force to conquer the world or silence your critics.  First, you have to develop a straw man, or let’s say a victim, just as Hitler did.   Let’s see, how many societal victims can we name?  The elderly, the poor, the disabled, any ethnic race other than white, homosexuals, women and those cute little male lions (Cecil) that eat their cubs come to mind.  Then you have to create a group which supports and defends the victim.  We’ll call this group the “Victim Defenders.”  The rest is easy.

To silence your critics, all you have to do is convince the public that anyone who doesn’t support and defend the victim is cheap, insensitive, cruel, a bigot, a racist, a homophobe, a nativist, a voter suppressor, an animal hater, or a misogynist.  Since the average individual doesn’t want to be accused of being one of these pejoratives, they shut up and the silencing is complete.

Hillary Clinton wasted no time, a few hours before the first Republican Presidential debate on August 6, 2015, to accuse all of the Republican candidates of being voter suppressors for advocating voter identification before being able to vote.  Hillary is a true-blue “Victim Defender,” no matter what it costs.

Critics of any of Obama’s policies are of course racists because he is black.  Those with religious convictions against gay marriage are bigots and homophobes, and they must pay for their transgressions and pay dearly.  If you take issue with Hillary’s position on women, you are a misogynist.

Now is there an analogy to Hitler’s extermination of the Jews and the genetically-challenged in contemporary America?  Who is being exterminated today?  Oh, but ladies and gentlemen, you know those being exterminated have no rights under our constitution, so it’s OK.  They are just blobs of protoplasm growing in the womb, with a heart, a brain, lungs and limbs.

So men, on the U. S. Supreme Court, out of thin air, no less, decreed that unborn babies ARE NOT subject to the protections of the U.S. Constitution.  In fact, under this Supreme Court decision, “Planned Infanticide Hood” can sell the dead baby’s body parts for huge sums of money, not legally.

The court decision is quite interesting in that the U.S. Constitution makes no mention of abortion, but every single Founding Father would have reacted with horror at the thought of exterminating a baby in the womb, as it would have vehemently violated their strongly-held religious beliefs.  Is it any wonder that religious people today are equally horrified?

If men or women or a court can decide that an unborn baby has no rights, then how far of a stretch is it for a mortal man or woman or a court to decide to suspend the rights of all humans, even under the alleged protections of the Constitution and even though all living humans are supposed to have unalienable natural rights that come from their Creator, not from man, under that Constitution?  Not very far, it would seem.

And then, to go a little farther with this thought, how far of a stretch is it for a mortal man or woman or a court to suspend the constitutionally-protected property rights of landowners?  But you see, this has already happened with the passage of radical environmental laws that supersede and have priority over so-called unalienable property rights.  These radical environmental laws have now forced the rural landowner to bear most of the brunt of those laws, with no legal recourse or protection of those rights.  Our nationally-known organization, the National Association of Rural Landowners, was formed 10 years ago to be an advocate for those disenfranchised rural landowners.  We are well-known in rural circles throughout the U.S.

The slow slippage into totalitarian rule happens a little bit over time as the people become unwitting co-conspirators in fudging the rules, changing the rules, amending the rules, suspending the rules and allowing our leaders to lie through their teeth in an overt and deliberate attempt to become the Dictators of America, whether the Dictator is one man or woman, or a group of men or women in a cabal of elites, rightfully called an Absolute Democrat Monarchy.

It happens as unconstitutional laws are passed that are not challenged in court.  It happens when judges legislate from the bench.  It happens when federal, state and local bureaucracies become powers unto themselves with no Congressional oversight, in violation of Article 1, Section 1 of the Constitution.

It happens when politicians violate their oath of office and are criminally negligent in discharging their duties for and on behalf of the people, as we discussed in our last article entitled, “We’re Charging Governors With Violation of Their Oath of Office.”

It happens when you pass the War Powers Act (FDR – 1941) that never sunsets and can suspend the constitution and habeas corpus on the whim of the President.  Japanese-Americans were interned on this authority.

It happens when Congress passes the Patriot Act that repeals portions of the U.S. Constitution.  It happens when you pass the National Defense Authorization Act and the Trade Powers Act that gives extraordinary, unconstitutional powers to the President.

It happens as corruption invades our institutions like a cancer that can’t be cured.  It happens as the people and the politicians lose their sacred honor, where their word is no longer their bond and where greed, avarice, self-gratification, or the obsession with being re-elected overtake their instinctive desire to support and defend what is right and punish what is wrong.

And it happens when the “Victim Defenders” of one ideology silence another ideology with false charges of being cheap, insensitive, cruel, a bigot, a racist, a homophobe, a nativist, a voter suppressor, an animal hater, or a misogynist.

Who are the “Victim Defenders?”  You decide!

The question is, will the American people override the “Victim Defenders,” or will they follow in the path of the German people and become complicit and co-conspirators in the death of America and American freedom and as a result, bring chaos and anarchy to the world?

You Don’t Need A ‘Night of the Long Knives’ To Silence Critics added on Sunday, August 16, 2015