HAS CENSORSHIP KEPT OBAMA IN OFFICE?

(Aug. 13, 2015) — On Wednesday, BirtherReport.com posted a portion of an ABC News article titled, “Meet the Most Interesting 2016 Candidates You’ve Never Heard Of.”

It was unclear from the article whether or not any of the entities identified by ABC are registered with the Federal Election Commission (FEC), as links to official campaign websites, if they exist, were not included in the article.

The piece has been widely disseminated by the mainstream media, including ABC’s radio affiliate, without ABC’s embedded links to related topics but acknowledging ABC’s copyrighted material.

However, at least one of the candidates, Christopher Earl Strunk, has filed papers with the FEC as a 2016 presidential candidate, running on the “Natural Born Citizen Party” ticket.

Strunk has challenged Barack Hussein Obama’s constitutional eligibility to serve as president, including in a lawsuit which asked to prevent Obama’s name from appearing on the 2012 ballot filed in New York State for which Strunk was ordered to pay approximately $177,000 in defendants’ attorneys’ fees.  The judge in the case, Arthur Schack, dismissed Strunk’s contention that Obama does not qualify as a “natural born Citizen,” as required by Article II, Section 1, clause 5 of the U.S. Constitution, terming Strunk’s claim “fanciful, delusional and irrational” in April 2013.

The mainstream media has only reluctantly reported the findings, resorting to ridicule following a second press conference given in July 2012, when Arpaio and Sue low stated that the standard of probable cause of forgery had been surpassed by the ongoing investigation.  None of the media has broadcast the posse’s conclusions.  Following the first press conference on March 1, 2012, Zullo reported that while Fox News Channel’s Sean Hannity had expressed an interest in having Zullo as a guest that evening, Hannity’s producers quickly quashed the notion.

At the same time, Zullo reported that several journalists have provided affidavits stating that they were threatened with their careers or worse should they decide to publish anything questioning Obama’s past or public life narrative.

Upon seeing the referenced article at Birther Report.com, The Post & Email accessed the story at ABC to read it in its entirety. Below the article appeared comments from various readers submitted on Wednesday and Thursday. 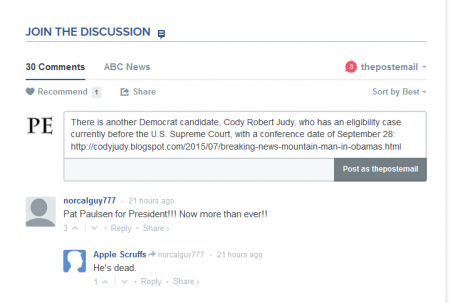 The number “3” depicted in white surrounded by red to the left of our Twitter name, “thepostemail,” indicated that three previous comments from our account had been approved and published at some point in the past.

Our comment referred to 2008, 2012 and 2016 declared presidential candidate Cody Robert Judy, who challenged the constitutional eligibility of Sens. John McCain and Barack Obama in 2008 and Obama’s again in 2012 and 2016.  Judy Currently has a case scheduled for a reconsideration conference with the U.S. Supreme Court regarding his request to proceed in forma pauperis on September 28, just after the court returns from its official summer break.

The court held a conference on Judy’s case on June 18, after which it was not dismissed, but rather, his request for in forma pauperis status denied.  Judy’s suit is based on his claim that the Obama campaign violated the Sherman Anti-Trust Act, thereby harming Judy’s presidential campaign.  In the filing, Judy referenced the Cold Case Posse’s investigation and findings into Obama’s only publicly-profferred documents.

In an interview in early July, Judy explained that the court clerk informed him that while its members are officially on recess during the summer months, they are in actuality still continuing to review cases and plan for the resumption of hearings in the fall.

Judy believes that as a declared presidential candidate in both 2012 and 2016, he has cleared the hurdle of legal “standing” often cited by judges as a requirement for a case to proceed.

After the submission of our comment, the following message appeared, indicating that the comment was “waiting to be approved by ABC News.”

Refreshing the article then showed: 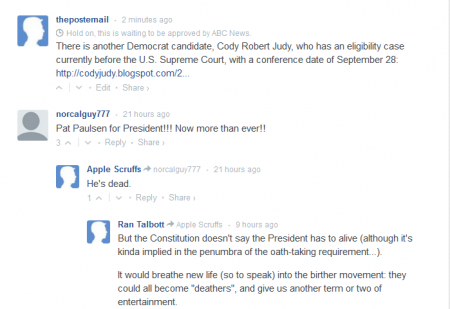 Returning to the article several minutes later revealed the following: 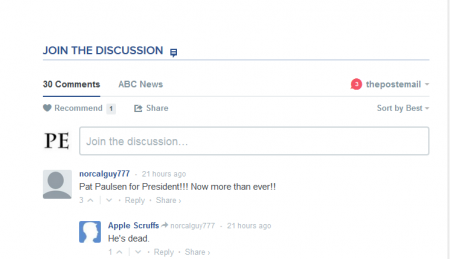 On May 11, 2013, NewsBusters reported that “Presidents of ABC and CBS News Have Siblings Working at White House With Ties to Benghazi,” referencing the terrorist attack in Benghazi, Libya which killed four Americans and seriously injured at least ten others.

When “insinuations” of conflict of interest were voiced by “conservatives” identified by The Post as National Review Online, the paper responded, “Such insinuations make media types bristle. They take exception to the notion that complicated judgments about the news — often made by others within an organization — have anything to do with personal favoritism or familial relationships. The critics, they say, can’t point to any direct evidence that such relationships have affected the amount or tone of their news coverage.”

Within several months of Obama’s 2009 inauguration, former campaign communications direction, Anita Dunn, told a group she was addressing, “We controlled the media.”

Dunn is married to Robert Bauer, a senior partner at the Perkins Coie law firm and former Obama White House Counsel, who threatened an Obama eligibility litigator and World War II veteran in 2009 with “sanctions, including costs, expenses, and attorneys’ fees…” should he continue with his “frivolous appeal.”