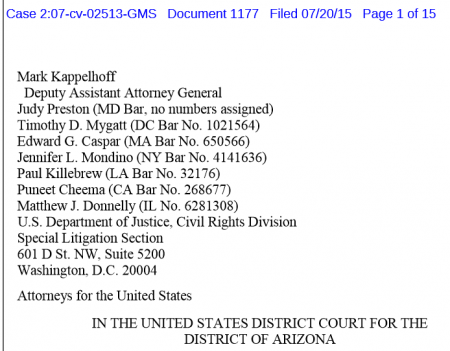 (Jul. 21, 2015) — On Monday, the U.S. Department of Justice, Civil Rights Division, Special Litigation Section representing “the United States,” filed a motion to intervene in the case of Melendres, et al v. Arpaio, et al based on its expressed desire to enforce the “equal protection clause” of the 14th Amendment to the U.S. Constitution.

Melendres was originally filed in the U.S. District Court for the District of Arizona in December 2007, with plaintiffs represented by attorneys from the American Civil Liberties Union (ACLU) and other law firms.  Named as defendants were Maricopa County, AZ Sheriff Joseph M Arpaio, several of his employees, and Maricopa County as its own entity.

Because Melendres is a civil case, the jury system has not been invoked and the judge issues all decisions. In December 2013, U.S. District Court Judge G. Murray Snow ruled that Arpaio’s office violated the constitutional rights of the plaintiffs during traffic stops and detentions while attempting to enforce federal immigration law.

Arpaio is a six-term sheriff and former drug enforcement officer for the federal government, having worked in Mexico and overseas to interdict illegal drug shipments to the United States.  He eventually led the Arizona division of the Drug Enforcement Administration (DEA).

Arpaio turned 83 on June 14 and plans to seek re-election to a seventh term as sheriff in 2016.

In March of this year, through his attorney, Arpaio admitted to having failed to follow all of Snow’s orders resulting from the 2013 judgment and offered to pay a settlement to the victims.  Snow declined the offer, instead choosing to take allegations of civil contempt against Arpaio to trial, the litigation costs for which are borne by county taxpayers.

The Department of Justice first intervened in the case on May 30, 2015, when it asked for two hard drives allegedly containing information gleaned from the CIA by confidential informant Dennis Montgomery, who had been performing work for Arpaio’s office on a matter outside of the civil contempt proceedings overseen by Snow which began in April. During questioning on April 23, Snow asked Arpaio if Montgomery had found any evidence of “collusion” between the Justice Department and him.  Arpaio responded that Montgomery had been focusing on alleged breaches of email accounts to include Snow’s.

The Justice Department attorneys argued that their intervention in Melendres is timely on several points.  In consideration of any “delay” that might result from intervention, if granted, the attorneys wrote:

The Post & Email has personally notified the U.S. Department of Justice about police misconduct and violations of constitutional rights throughout the state of Tennessee, where citizens are threatened, denied transcripts, arrested without probable cause, beaten, tasered, shot to death, and otherwise abused by local, county, and state-level law enforcers. We have also notified the FBI, a subset of the Department of Justice, and received no response from either entity.

Motions to intervene in Melendres filed by Atty. Larry Klayman on behalf of Montgomery have been denied by Snow.

Klayman represents Arpaio in a lawsuit filed on November 20, 2014 challenging the constitutionality of Barack Hussein Obama’s declared immigration policy changes made earlier that evening in a public speech.  Subsequent to that filing, 26 states sued the Obama regime on similar grounds, with U.S. District Court Judge Andrew S. Hanen ruling in favor of the plaintiffs, followed by a concurring decision from a three-judge panel of the Fifth Circuit Court of Appeals.

Klayman represents Montgomery in a very recent lawsuit against five ACLU attorneys who represent the Melendres plaintiffs for allegedly defaming Montgomery and failing to disclose to Snow that Montgomery brought the same information to the ACLU as he now has to Arpaio.

No response to the lawsuit has been filed on behalf of the ACLU, nor has Snow issued any decision as to whether or not the five attorneys should remove themselves from the Melendres case as requested by Klayman.  Snow refused to recuse himself after learning that comments his wife reportedly made denigrating Arpaio were conveyed to Arpaio and their veracity investigated and confirmed by a private investigator hired by one of Arpaio’s attorneys.

According to the citizen report, Snow’s wife stated that her husband “hated Arpaio” and wished to see him lose his next election.  Snow insists that he is not biased against Arpaio.  At the time, KPNX reported erroneously that “Sheriff Joe Arpaio’s second-in-command gave testimony Friday that filled in the blanks on the sheriff’s bombshell testimony the day before that he investigated the judge presiding at his contempt hearing.”

Other media mischaracterized the probe as an investigation into Snow’s wife.

Arpaio has been an outspoken advocate of enforcing the nation’s existing immigration laws, particularly in recent years.

Last summer, an influx of approximately 70,000 men, women and children from Central America were not only allowed to cross the southern border, but also were given safe haven courtesy of the U.S. government by means of housing, food, medical care, transportation and housing with relatives if possible.  Some were flown to great distances, including Hawaii.  Many such illegals affected Maricopa County and Arizona as a whole.  Some of the aliens allowed into the country last summer were reportedly gang members.

Arpaio has stated publicly that many of the same illegal aliens he has turned over to the Immigration and Customs Enforcement (ICE) agency for processing and detention return to his jails after having committed yet more crimes against his constituents.  At times, ICE has reportedly refused to take illegal aliens into custody from Arpaio as a result of a “new order from the Department of Homeland Security” issued in December 2011.

According to the Center for Immigration Studies (CIS), “hundreds of thousands of deportable aliens who were iden- tified [sic] in the interior of the country were released instead of removed under the administration’s sweeping ‘pros- ecutorial discretion’ guidelines” in 2013.

On December 18, 2007, within a week of the filing of Melendres, MSNBC commentator Chris Matthews stated that Obama possessed “an Islamic background.”  Particularly since the Arab Spring which began in December 2010, tens of thousands of unvetted Muslims have been flown into the United States, purportedly as refugees, and awarded federal benefits at the expense of the American taxpayer.  Evidence of ISIS members and other Islamics crossing the southern border has been reported by Judicial Watch, a non-profit, public-interest law firm.

Last Thursday, an Islamic immigrant from Kuwait who had traveled to the Middle East last year murdered five American servicemen in Chattanooga, TN, all of whom were age 40 and younger, some the fathers of young children.  Obama did not order flags to be flown at half-mast, as is customary following national tragedies, until today.  CNN attempted to explain the oversight by stating that American flags were “out of sync” after the five men were murdered by Mohammod Abdulazeez.

Arpaio is the only sheriff in the country to have launched an investigation into the long-form birth certificate image posted on the White House website on April 27, 2011. At the request of approximately 250 constituents following reports that the image was forged, in September of that year Arpaio delegated his Cold Case Posse the task of examining the image to determine its authenticity.

After approximately six months, Arpaio and Cold Case Posse lead investigator Mike Zullo held a press conference in which they declared the image a “computer-generated forgery.”  Also examined during that time frame was Obama’s purported Selective Service registration form, which was also deemed fraudulent during the press conference.

Arpaio has been ridiculed, marginalized, and insulted for his investigation into the “birther” issue surrounding Obama.  Arpaio, for his part, stated in recent radio interviews that investigators continue to draw closer to identifying the individual(s) who created the birth certificate forgery.  “I think I know a fraudulent document,” Arpaio told Klein earlier this month.

As of press time, Snow has not ruled on the Justice Department’s request to intervene, while a Motion to Stay filed by Arpaio’s attorneys was denied on Monday and a status conference scheduled for July 31 at 2:00 p.m. PDT.

Arpaio’s attorneys have placed the Ninth Circuit Court of Appeals on notice that they plan to issue a request for a Writ of Mandamus by July 24 in response to Snow’s refusal to recuse himself from the case, which they requested in early May.

As referenced in its request to intervene, the Justice Department filed in May 2012 a separate lawsuit against Arpaio bearing many of the same allegations as the plaintiffs in Melendres.  Last week, in place of a bench trial scheduled to begin on August 10, Arpaio and Justice reached an out-of-court agreement on all points except one involving “discriminatory policing claims” (p. 2).

In its brief, Justice used the word “contumacious” on two occasions to describe Arpaio’s “conduct” in response to Snow’s orders.

MINUTE ENTRY for proceedings held before Judge G Murray Snow: Status Conference held on 7/20/2015. IT IS ORDERED denying 1171 Motion to Stay. Status Conference set for 7/31/2015 at 2:00 PM in Courtroom 602, 401 West Washington Street, Phoenix, AZ 85003 before Judge G Murray Snow. By July 29, 2015, Parties are ordered to file (1) suggested revisions to the Supplemental Permanent Injunction in light of the recent Mandate of the Ninth Circuit Court of Appeals (see Doc. 1163 ); (2) schedules for the completion of outstanding internal investigations, document production requests, and/or other discovery; and (3) responses to Larry Klayman’s Motion for Admission Pro Hac Vice.