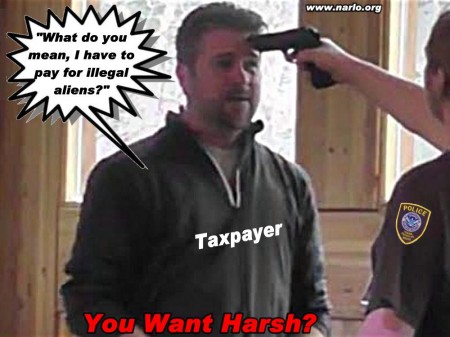 (May 24, 2015) — “The current practice of extending U.S. citizenship to hundreds of thousands of ‘anchor babies’ must end because it creates a magnet for illegal immigration into our country. Now is the time to ensure that the laws in this country do not encourage lawbreaking.”  — Rep. Steve King

We cannot afford all this illegal immigration and everything that comes with it, everything from the crime and to the drugs and the kidnappings and the extortion and the beheadings and the fact that people can’t feel safe in their community. It’s wrong! It’s wrong!    — Former Arizona Governor Jan Brewer

Immigration, legal or illegal, has been festering in America since the ink was dry on the Constitution.  Racial bias and ethnic purity, along with financial, economic and security fears have driven immigration policy right, left, up, down and inside out for well over 150 years, every time a wave of immigration hits American shores.

But the worst magnet was the bastardization of the 14th Amendment that created what is now known as “Anchor Babies” where any child born in America, from anywhere on the planet, automatically becomes a citizen of the United States.  Ludicrous!

The only “fix” that seems to come out of Washington, DC, the President, Democrats and a whole host of pro-illegal-immigrant Non-Governmental Organizations (NGO’s), is Comprehensive Immigration Reform, more generally defined as “AMNESTY.”  What is overlooked is that there are already laws on the books to control illegal immigration.  (You won’t find AMNESTY in any one of those laws.)

The first law is, it is illegal to come to America illegally.  The punishment is deportation.

The second law is, it is illegal to employ an illegal alien.  The punishments are severe for violators.

The third law is, if an illegal alien commits a crime, he either goes to jail, or he is deported.

1.         The 14th Amendment granting citizenship to babies from foreign lands being born in America (“Anchor Babies.”)

2.         Government benefits, paid for by the taxpayer by the billions of dollars every year.

4.         Overstaying visas with no government controls or oversight.

5.        Child labor laws that have all but removed young, teenage legal Americans from summer agriculture jobs.  How many of you in our reading audience, as teenagers, picked berries, vegetables, or fruit to make extra money in the summer?  What are your kids and grandkids doing now?  Playing on their damn electronic machines, getting fat and dumb, that’s what!

In a recent Heritage Foundation study on illegal immigrations, they wrote this:

“In 2010, the average unlawful immigrant household received around $24,721 in government benefits and services while paying some $10,334 in taxes. This generated an average annual fiscal deficit (benefits received minus taxes paid) of around $14,387 per household. This cost had to be borne by U.S. taxpayers.”

At an estimated 3,445,000 illegal immigrant households, (from the study) that deficit equals almost $50 Billion per year.  Some estimates are much higher than that.

Our solution to illegal immigration is to trigger self-deportation by closing the borders, removing all government benefits inuring to illegal aliens including welfare, education and health care, eliminate child and earned income tax credits, strictly enforce employer violations for hiring illegal aliens and to mount a legal challenge to re-adjudicate the 14th Amendment regarding the U.S. Supreme Court “Anchor Baby” decision and return the provision to the original intent of the Congress at the time the Amendment was ratified, that is, repatriation of the Negroes as American citizens.

Many of you will think our solutions are too harsh and lack compassion?   We will tell you what is even harsher and even less compassionate.

4.         Illegal aliens getting driver’s licenses and magically becoming eligible to vote (for Democrats)

5.         Green card recipients being upgraded to legal status so that they can vote  (for Democrats)

8.         A government that won’t enforce current immigration law and stops states from enforcing it.

9.       A government that won’t adequately track criminal illegal aliens and lets them create havoc, mayhem and murder with almost virtual impunity and letting thousands of criminal aliens out of jail into the general population ….. for FREE!  If the criminal aliens are deported, they just come back, and even though it is a felony to return to America after being deported, these criminals never seem to see a jail cell.

Then there are these “harsh” injustices perpetrated on legal Americans by their government.

2.         The Environmental Protection Agency (EPA) penalizing legal property owners $75,000 per day for alleged violations of the Clean Water Act, in direct violation of the 8th Amendment.

3.         The IRS being used as a political weapon by the Obama Administration to go after conservative, non-profit organizations applying for tax-exempt status.  And the IRS employees are given bonuses, if you can believe that.

4.         The Department of Energy (DOE) giving $525,000,000 of our tax money to Solyndra while it was going broke.  Crony capitalism for environmental and social agendas runs rampant in federal government bureaucracies.

6.         The Bureau of Land Management (BLM) deploying over 200 heavily armed federal agents to oversee the rounding up of Cliven Bundy’s cattle for allegedly grazing on government land.

7.         President Obama, his Administration and ex-Secretary of State Hillary Clinton lying to the American people over their gross negligence in protecting U.S. Ambassador Christopher Stevens and three other brave men who gave their lives unnecessarily at the Benghazi compound in September 2012.

8.         Shoving down every American child’s throat Common Core State Standards, to add to the brainwashing already under way in our public schools at the hands of the Progressives for the last 60 to 100 years.

Look, we could go on and on about how government penalizes, incarcerates, badgers, harasses, intimidates, indoctrinates and brainwashes legal American citizens, enforcing millions of laws, little and large.  Now that’s harsh!  How is it that legal Americans are supposed to feel sorry and have compassion for those who break our laws?  An American can’t break a law without being punished, sometimes severely.  And God help you if you break an environmental law.  (See “Rural America in the Crosshairs“ video)  Why is it illegal aliens can break our laws, including environmental laws, and get rewarded for it, at the expense of legal Americans’ government-enforced generosity?  It not only defies common sense, it spits in the “eye” of justice and the face of every legal American.

Compassion is a worthwhile human attribute when applied rationally.  Irrational compassion, however (a product of Progressives to buy votes), whether it is applied to illegal aliens or millions of legal American freeloaders, can and has become a direct threat to our economy, jobs, financial stability and to our national security.  America is going broke fast, folks.  NO!  IT IS BROKE!  It can’t afford to add more souls to our sinking lifeboat.  We could add these folks to the good ship America if it wasn’t for the fact that Progressives have all but destroyed the one basic element to our freedom, wealth and jobs – CAPITALISM – by regulating it to death and sucking the money out of the system to buy votes, such that true capitalism doesn’t work any more.

But once again, ladies and gentlemen, we ask, who is going to stop it?

What this author doesn’t get is why the American people aren’t furious and ready for battle.  As little as a hundred years ago, angry citizens formed groups and tarred and feathered errant, corrupt and stupid politicians and took them out into the forest to walk back home in shame.  If there is no punishment for corrupt politicians who spit in their constituents’ faces and the law, the crimes will continue and the citizens will only have themselves to blame.

A representative republic becomes a dictatorship if the people won’t hold their representatives accountable to the laws of individual liberty, either by law or by force.  In case you hadn’t noticed, the crimes against the American people by their government are continuing, unabated.  Now that’s really harsh, far harsher than forcing illegal aliens to self-deport.

Additional Reading:  “The Impending Disaster from the Hordes of Illegal Aliens”

Is It Too Harsh To Force Illegal Aliens to Self-Deport? added on Sunday, May 24, 2015

4 Responses to "Is It Too Harsh To Force Illegal Aliens to Self-Deport?"