CRUZ’S ELIGIBILITY QUESTIONED, BUT OBAMA’S, DESPITE FORGERIES OF GOVERNMENT DOCUMENTS, HAS NOT 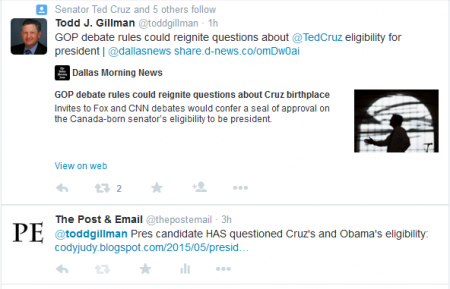 (May 24, 2015) — An article in The Dallas Morning News dated Saturday, May 23, 2015 and updated on Sunday morning reported that “Not surprisingly, the GOP presidential debates announced last week will be open only to candidates who can legally serve as president.”

Washington Bureau chief Todd J. Gillman wrote that Fox News and CNN will be “the first arbiters of Canada-born Ted Cruz’s eligibility. By putting him on stage, they will implicitly be granting a seal of approval to the only contender born outside the U.S.”

On May 20, Gillman wrote that the first 2016 Republican presidential primary debate, to be held on August 6 of this year, “is only open to announced candidates for president who meet all constitutional requirements. The latter provision would implicitly confer a Fox stamp of approval on Canada-born Sen. Ted Cruz, if he makes the cut,” referring to Fox’s announced criteria of including the ten highest-polling candidates as shown by five national polls prior to the debate.

Fox News has both reported Cruz as both eligible and not eligible for the presidency based on his birth in Calgary, Alberta, Canada to a U.S.-citizen mother and Cuban-citizen father.

On August 18, 2013, Gillman reported that Cruz had released his birth certificate exclusively to The Dallas Morning News, posting it at the top of his article titled “Dual citizenship may pose problem if Ted Cruz seeks presidency.”  Cruz possesses a Canadian birth certificate and was considered a Canadian citizen until he renounced that citizenship in May of last year, although his spokeswoman, as quoted by Gillman in 2013, said Cruz was unaware of any Canadian citizenship.

Cruz sought his U.S. Senate seat in 2012 without informing his would-be Texas constituents, and allegedly not knowing, that he was a dual citizen of Canada and the U.S.

In 2013, Gillman reported that Cruz was born with dual Canadian-U.S. citizenship and that “Knowingly or not, dual citizenship is an apparent if inconvenient truth for the tea party firebrand, who shows every sign he’s angling for the White House.”

Barack Hussein Obama also claimed dual citizenship when his 2008 campaign website, FighttheSmears.com, posted an image titled “Certification of Live Birth” to allegedly prove that he was born in Honolulu, HI on August 4, 1961.  Obama claims a Kenyan father and U.S.-citizen mother.  Rather than investigating, the media downplayed Obama’s claim and stressed that his birth in Hawaii made him eligible for the presidency as a “natural born Citizen.”

Between 2009 and 2011, the Congressional Research Service (CRS) issued four commentaries as to why Obama  and his 2008 opponent, Sen. John McCain, are purportedly eligible to hold the office of president. McCain was born in Panama to two U.S.-citizen parents, with his father serving as an admiral in the U.S. Navy at the time.

As noted by constitutional scholar Joseph DeMaio exclusively for The Post & Email, Founding Father Alexander Hamilton wrote in Federalist Paper No. 68regarding the presidency:

Nothing was more to be desired than that every practicable obstacle should be opposed to cabal, intrigue, and corruption. These most deadly adversaries of republican government might naturally have been expected to make their approaches from more than one querter, but chiefly from the desire in foreign powers to gain an improper ascendant in our councils. How could they better gratify this, than by raising a creature of their own to the chief magistracy of the Union? But the convention have guarded against all danger of this sort, with the most provident and judicious attention. They have not made the appointment of the President to depend on any preexisting bodies of men, who might be tampered with beforehand to prostitute their votes; but they have referred it in the first instance to an immediate act of the people of America, to be exerted in the choice of persons for the temporary and sole purpose of making the appointment. And they have excluded from eligibility to this trust, all those who from situation might be suspected of too great devotion to the President in office. No senator, representative, or other person holding a place of trust or profit under the United States, can be of the numbers of the electors. Thus without corrupting the body of the people, the immediate agents in the election will at least enter upon the task free from any sinister bias. Their transient existence, and their detached situation, already taken notice of, afford a satisfactory prospect of their continuing so, to the conclusion of it. The business of corruption, when it is to embrace so considerable a number of men, requires time as well as means. Nor would it be found easy suddenly to embark them, dispersed as they would be over thirteen States, in any combinations founded upon motives, which though they could not properly be denominated corrupt, might yet be of a nature to mislead them from their duty.

While acknowledging the “natural born Citizen” requirement, mainstream media outlets have failed to report on the circumstances leading up to the insertion of the term in Article II, Section 1 of the U.S. Constitution. On July 25, 1787, Founding Father John Jay wrote a letter to George Washington, who was presiding over the constitutional convention in Philadelphia, in which he said:

Permit me to hint, whether it would not be wise & seasonable to provide a strong check to the admission of Foreigners into the administration of our national Government; and to declare expressly that the Command in chief of the american army shall not be given to, nor devolve on, any but a natural born Citizen.

In his article this weekend, Gillman instead cited “legal consensus” and “political precedents” to determine presidential eligibility rather than John Jay, Alexander Hamilton, or “The Law of Nations” by Emmerich de Vattel, upon which the Framers were known to have relied heavily in crafting the Constitution and the foreign policy of the new government they created.

The Republican Party has refused to issue a definitive statement on the meaning of the term “natural born Citizen.”  Likewise, the U.S. Supreme Court has been “evading” the issue since Obama’s ascension to the White House.

On May 23, Gillman claimed that Cruz’s dual citizenship had been “unbeknownst to him or his parents.”  He also reported that “A Fox official declined to discuss the eligibility issue. CNN officials didn’t respond to queries about how they will decide whether Cruz meets the constitutional test or how they would handle a challenge.”  Gillman also speculated that “It’s not so hard to imagine a candidate who doesn’t make the cut heading to court to say, ‘Hang on a second, that guy isn’t even a natural-born American.’”

The media has left unreported a myriad of challenges to Obama’s constitutional eligibility and ridiculed anyone who questioned Obama’s life story, including after the Maricopa County Cold Case Posse held two press conferences three years ago to report that Obama’s long-form birth certificate and Selective Service registration form are “computer-generated forgeries.”

The two “documents” are the only releases the White House officially made of its occupant’s past, although it now claims that it requested the Certification of Live Birth (COLB) in 2008 first posted at The Daily KOS. The White House and Daily KOS versions have different respective background colors which have not been explained.

The “short-form” birth certificate has also been declared a forgery by experts.

On Saturday, The Post & Email noted that the long-form birth certificate image is no longer displayed when the reader logs on to the designated page at whitehouse.gov; rather, links must be clicked to view it on a secondary page.

On April 13, The Post & Email wrote a letter to Cruz at his campaign office asking him to release more documentation on his background, as Obama failed to do.  While we received back the certified-mail card last week, no other response has been provided.  Both the State Department and U.S. Citizenship and Immigration Services (USCIS) have declined to release any documents it may hold relating to Cruz without his written consent.

In 2008, Rep. Nancy Pelosi certified Obama and his running mate, Sen. Joseph Biden, as constitutionally eligible on State of Hawaii Certification of Nomination forms when the Hawaii Democrat Party apparently would not.  Hawaii is the only state which requires a statement indicating that the nominees meet constitutional requirements. Pelosi signed two sets of forms that year:  one for Hawaii and another for the remaining 49 states which do not require the wording.

On Sunday morning, The Post & Email tweeted to Gillman that in fact, a presidential candidate “HAS” challenged Cruz’s and Obama’s constitutional eligibility, referring to 2008, 2012 and 2016 Democrat presidential candidate Cody Robert Judy, who currently has an active case, Judy v. Obama, No. 14-9396, at the US Supreme Court.  In our tweet, we included a link to an article Judy wrote questioning Cruz’s eligibility and inviting constitutional scholars and attorneys to submit Amicus Curiae briefs supplemental to his case.

Judy has also questioned the eligibility of Sen. Marco Rubio, McCain and Louisiana Gov. Bobby Jindal.  As a Democrat seeking the office, Judy asked why Hillary Clinton has not raised the issue with Rubio, as The New York Times reported that Rubio could attract Democrat voters away from Clinton in a hypothetical race between the two.

Cruz has never produced anything showing that he was registered as a U.S. citizen born abroad at his birth or at any time afterward, although it might not have been mandatory for Cruz to claim U.S. citizenship.

On his applications for Texas Solicitor General, the question of U.S. citizenship was not asked, as The Post & Email discovered after receiving the documents through a Public Information Act request last fall.

A Fox News article from January reported that a total of nine Republican debates will be held, with five this year and four in 2016 leading up to the selection of the party’s candidate at its convention in July 2016.

The Post & Email Contacts The Dallas Morning News About Challenges to Article II Eligibility added on Sunday, May 24, 2015