“OUR SON FROM KENYA” 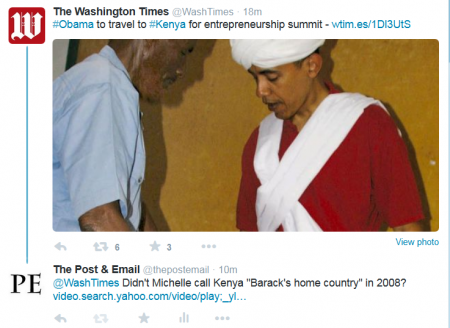 (Mar. 30, 2015) — In a tweet on Monday, The Washington Times provided a link to an article entitled, “Obama to Travel to Kenya for Entrepreneurship Summit” depicting Obama in a widely-circulated photo in African dress from a trip he took prior to assuming the White House.

The Times article notes that “The visit will be Mr. Obama’s fourth trip to sub-Saharan Africa as president and he will hold one-on-one meetings with other world leaders while in Kenya.”

Obama will reportedly be joining “business and government leaders” to discuss ways to “to accelerate economic growth, strengthen democratic institutions, and improve security.”’

CNN reported that the July trip will be Obama’s first to “his father’s native Kenya as president this summer.”

Last month, the U.S. economy was said to be “growing at a moderate pace.” A second report states that in 2015, “Improving fundamentals should result in a broad-based increase in economic activity driven by an expansion of small and middle market firms that make up the real economy.”

The U.S. unemployment rate is predicted to decrease this year as small and middle-sized businesses expand their workforces.

Since Obama took office, freedom of speech in the U.S. has been threatened, and the Department of Homeland Security openly allows tens of thousands of illegal aliens to cross the borders, deporting 40% fewer illegals than in 2009.

In response to The Times’ tweet, The Post & Email wrote, “Didn’t Michelle call Kenya ‘Barack’s home country’ in 2008?” referring to a campaign speech Michelle Obama made in which she urged Kenyans to undergo HIV testing in what she referred to as her husband’s “home country.”

Obama claims a birth in Honolulu, HI on August 4, 1961, although no Hawaii hospital has claimed to be his birthplace.  Obama also asserts that his father was from Kenya and his mother from Kansas, which he says resulted in “values from the heartland.”

Members of the Kenyan Parliament have, however, claimed that Obama was born in Kenya and is a “son of the soil.” In 2010, U.S. taxpayers’ money was used to campaign for a change to Kenya’s constitution which would allow abortion for the first time.  The referendum on the proposed new constitution was held on August 4 of that year and yielded approval for the new governing document.

Prior to national elections in Kenya last March, Obama greeted the Kenyan people in a video announcement in which he said that the U.S. did not “endorse any candidate for office.”  However, as a U.S. senator in 2006, Obama campaigned for his alleged cousin, Muslim Marxist Raila Odinga, for president, after which more than 1,000 Christians were massacred at local churches by Muslims when Odinga was not proclaimed the victor.

While in Kenya in 2006, Obama spoke to the Kenyans about “accountable” and “transparent” government.  “If the people cannot trust their government to do their job for which it exists – to protect them and provide for their common welfare – all else is lost,” he told them.

Obama opened and closed the video greeting with words in another language, most likely Swahili.  The White House’s Senior Director for African Affairs wrote below it, “In these videotaped remarks, President Obama delivers a clear message to the people of Kenya: the upcoming elections are a historic opportunity for Kenyans to stand together, as a nation, for peace and progress, and for the rule of law. The President has strong ties to the people of Kenya. From visiting his father’s village to touring the country as a U.S. Senator, he has a deep and personal interest in seeing Kenya flourish.”

Kenyans celebrated exuberantly when Obama reportedly won the 2008 and 2012 elections.  The day following the 2008 election, Kenya’s vice president was reported to have said, “This means Obama’s leadership of US is likely to bring world nations closer and bridge polarization that currently exist.”

The new Kenyan constitution allows dual citizenship, with which Obama claims he was born because of his father’s Kenyan citizenship and his mother’s U.S. citizenship.  It also makes anyone a Kenyan citizen who can prove that one parent was Kenyan, “irrespective of the place of birth.”

Last year, Ronan Farrow of MSNBC asked Kenyans in their own country their thoughts about Obama, to which one responded that “Obama is our son from Kenya.”

Since 2008, the media has attempted to dispel speculation and circumstantial evidence that Obama was born in Kenya.

Several links contained in a blog post at Israel National News regarding Obama’s alleged origins in Kenya are broken.

In May 2009, the Kenyan Ministry of National Heritage stated that a “cultural festival” was held in the village of Kogelo “to honour the birthplace of President Barack Obama and re-dedicate the tomb of Barack Hussein Obama, Sr.”

Article II, Section 1, clause 5 of the U.S. Constitution requires that the president and commander-in-chief be a “natural born Citizen,” which has not been clearly defined in the modern era.  In the U.S. Supreme Court case of Minor v. Happersett in 1875, the court stated that there was “no doubt” that a person born in the country to two U.S.-citizen parents qualified as a “natural born Citizen.”

Obama’s claimed father did not naturalize as a U.S. citizen, but rather, was in the country on a student visa which was revoked by Harvard University before he completed his Ph.D. as planned.

On April 27, 2011, the White House posted what it said was Obama’s long-form birth certificate from Hawaii, allegedly proving his birth there and presumably his eligibility for the presidency.  However, birthplace is now a moot point in discussions of whether or not Sen. Ted Cruz, who was born in Canada to a Cuban-citizen father who at some point became a Canadian citizen, is eligible to be president.

Misinformation states that “While Cruz was born in Canada, he was born to an American citizen mother in a family that temporarily relocated in order to work in the oil business. Just as John McCain’s eligibility was never really questioned, we believe Cruz’s scenario is in the same realm of reasoning. His family never gave up citizenship and they never attempted to become Canadian citizens.”

A criminal investigation conducted by the Maricopa County Cold Case Posse spanning three and one-half years determined after six months that the long-birth certificate image posted by the White House is a “computer-generated forgery,” along with Obama’s purported Selective Service registration form.  Neither Congress, the Selective Service System nor the U.S. Justice Department has launched an investigation into the findings.

Lead investigator Mike Zullo reported on March 1, 2012 that not only are Obama’s only proffered documents fraudulent, but also that the foreign airline manifests from the week in which he was allegedly born are missing from the National Archives.

In June 2013, a Yahoo! News reporter stated that Obama’s country of birth was Kenya, after which she was ridiculed, insulted and called a racist.

On Friday, radio host Carl Gallups stated that “very soon, it’s going to be outed that Barack Obama was not born on American soil.”  Gallups told The Post & Email that he was not referring to the posse’s investigation, although he forged a professional relationship with Zullo as it unfolded.

Zullo has not spoken publicly in more than two months.  In January, Gallups stated that Zullo would not comment further on the investigation until a decision had been made as to whether or not to hold a press conference to report new findings from both the birth certificate investigation and a second probe opened by Maricopa County Sheriff Joe Arpaio.  Arpaio had commissioned the posse to begin its work in September 2011 in order to avoid costs to county taxpayers.

Some scholars say that Obama’s birthplace makes no difference to his eligibility, as his father was never a U.S. citizen,

In his treatise, “The Law of Nations,” 18th-century philosopher Emmerich de Vattel wrote:

§ 215. Children of citizens born in a foreign country.

It is asked whether the children born of citizens in a foreign country are citizens? The laws have decided this question in several countries, and their regulations must be followed.(59) By the law of nature alone, children follow the condition of their fathers, and enter into all their rights (§ 212); the place of birth produces no change in this particular, and cannot, of itself, furnish any reason for taking from a child what nature has given him; I say “of itself,” for, civil or political laws may, for particular reasons, ordain otherwise. But I suppose that the father has not entirely quitted his country in order to settle elsewhere. If he has fixed his abode in a foreign country, he is become a member of another society, at least as a perpetual inhabitant; and his children will be members of it also.

§ 1. Of the state, and of sovereignty

A NATION or a state is, as has been said at the beginning of this work, a body politic, or a society of men united together for the purpose of promoting their mutual safety and advantage by their combined strength.

From the very design that induces a number of men to form a society which has its common interests, and which is to act in concert, it is necessary that there should be established a Public Authority, to order and direct what is to be done by each in relation to the end of the association. This political authority is the Sovereignty; and he or they who are invested with it are the Sovereign. (10)

Vattel’s work was known to have been heavily referenced by the Framers of the Constitution.

Obama Sr.’s native country has also spurred controversy on the President’s birthplace and citizenship — a simple “Obama Kenya” google search turns up countless conspiracy theories, which the President himself poked fun at earlier this month at the Gridiron Club’s annual dinner.

“If I did not love America, I wouldn’t have moved here from Kenya,” Obama, who was born in Hawaii, joked.

One Response to "Is Obama Traveling to His “Home Country” in July?"