FROM AN INMATE’S PERSPECTIVE 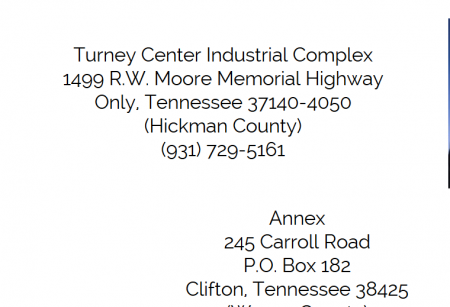 (Mar. 19, 2015) — [Editor’s Note: The following letter was received from Tennessee inmate Mike Parsons earlier this week. Its author, Michael Logan, became acquainted with Parsons after Parsons was reincarcerated in February of last year for allegedly violating his parole.  Parsons was first incarcerated for two and a half years on felony convictions following the killing of his dog by a citizen of his Tipton County, TN community on his property in September 2007.

In his letter, Logan admits to a troubled youth which led to crime and several incarcerations. He met Parsons at the Tennessee state penitentiary in Clifton, TCIX, where both men are currently housed. Parsons is expecting to be released sometime in May.

Logan describes having become aware, through Parsons, of the routine conditioning of members of the society, particularly as it relates to the pharmaceutical drugs many Americans consume every day.  Logan said that he found an alternative cure for Hepatitis C from a natural source which he was able to access from just outside the prison walls.

According to The Mayo Clinic:

Hepatitis C is an infection caused by a virus that attacks the liver and leads to inflammation. Most people infected with the hepatitis C virus (HCV) have no symptoms. In fact, most people don’t know they have the hepatitis C infection until liver damage shows up, decades later, during routine medical tests.

Hepatitis C is one of several hepatitis viruses and is generally considered to be among the most serious of these viruses. Hepatitis C is passed through contact with contaminated blood — most commonly through needles shared during illegal drug use.

Hepatitis C is a virus that causes damage to the liver.  According to the national institutes of health, many of those infected are not aware of it for many years.

Logan also suffers from HIV, which, according to the CDC, once acquired, remains in the body.HIV can lead to human immunodeficiency virus, or AIDS, which killed many people in the United States beginning in the 1980s. Some victims of the disease had received blood transfusions from infected individuals, as at the time, screenings for HIV in the blood were not routinely conducted.

The CDC also reports that HIV and hepatitis C can occur in the same individuals if they practice risky behavior involving the injection of illegal substances..

During our brief interview last month with Parsons, he indicated that much of the prison population is medicated with pharmaceutical drugs. Parsons told us that he does not take any such medications. A native American, Parsons has shared his knowledge of herbs and alternative medicinal treatments with Logan.

The field of alternative medicine includes herbal supplements, vitamin supplements, acupuncture, homeopathy, natural apathy, therapeutic massage and touch, and other forms of treatment which do not involve traditional prescriptions.

And alternative medicine website reports that there is no actual cure for Hepatitis C, but that milk thistle and glycyrrhizin could be helpful.

At the end of his letter, Logan states “that he believes that Parsons was “railroaded” and that Parsons has played a large role in opening his eyes to life’s possibilities and a greater awareness of his own potential. “They may have knocked Mike down for a while, but they did not knock him out. As long as there is breath in Mike Parsons, he will continue to walk in his calling to tell the truth. I’m so glad to be able to call him a friend,” Logan wrote.] One Response to "On Personal Choices, Crime, Conditioning and Reform"