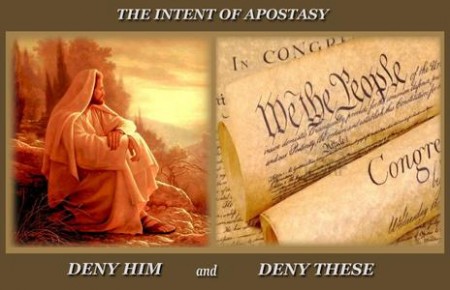 (Mar. 19, 2015) — Apostasy is the renunciation of a religious or political belief or allegiance. In America, where our government was founded upon the principle that our rights come from God, the implications of a religious apostasy creates a slippery slope that affects our government as well. This two-pronged apostasy shakes the very foundation of who we are as a people and what we expect and permit from our government. After all, it is logical to conclude that if God doesn’t exist then our rights can’t possibly come from Him.  And as we have seen, our government has been more than willing to take God’s place as the author and giver of our rights – rendering the very foundation of our Constitution inconsequential.

In ancient Israel, the effects of the nation’s falling away from its faith in God resulted in God’s judgment in the form of successful invasions from their enemies.  In the New Testament, we are warned that before Christ returns and the Anti-Christ is revealed, there will be a falling away from the faith.  Theologians refer to this as “The Great Apostasy” (2 Thessalonians 2:3).

Can the manifestation of this prophecy be the basis for what we are seeing today?   And if so, can we possibly stand against it if it has been prophesied?

While the Bible may speak about “The Great Apostasy,” it also makes it clear that we are to stand against such things.  In the Book of Revelation we are repeatedly admonished to repent, remain faithful, to persevere, and to overcome (Rev. 2:5, 10, 16, 17, 22, 26; 3:3, 5, 12, 19, 21). For Americans this also means that we are to stand against a government that has usurped God’s proper role in our lives in ways too numerous to mention.  For those who still believe in one God, it is incumbent upon us to worship only Him as the giver of our rights and liberties and to stand against all imposters who would replace Him – including those in government.  And we must understand what the Apostle Peter and other apostles understood when they were told to stop preaching “in that name” – that if there is a choice to be made between God and the laws of man – we ought to obey God rather than men (Acts 5:29).

The choice may have been clear for Peter and the apostles, but what about a culture that believes that faith in God is archaic and scientifically implausible?

Since Darwin wrote “On the Origin of Species by Means of Natural Selection, or the Preservation of Favoured (sic) Races in the Struggle for Life” (which is the book’s full titled as published in November of 1859), atheists have waged a very effective war against the tenets of faith in a supernatural being.  Darwin, with his racist theory, managed to provide a plausible explanation of the world we observe – separate and apart from the Genesis account that requires the intervention of the triune God. Darwin’s hypothesis has gained respect as the scientific standard mainly because it has been taught in classrooms around the world unchallenged – not because challenges don’t exist, but because challenges are censored from textbooks and conversations in classrooms.  Consider a courtroom that only allows either the defendant’s or the plaintiff’s side of the story to be told.  Would you expect a fair and educated verdict to prevail?  Of course not, but we expect a fair and educated verdict to be rendered by our children that attend these classrooms and are taught only one viewpoint of origins.

To make matters worse, the churches have not taught creation as detailed in Genesis for many reasons, including that they are intimidated by the very mention of the word “science” and/or fear the ridicule that would ensue from the evolutionists.  Consequently, children in America and around the world grow up believing that faith is God is for the foolish and uneducated. Consequently, we have become a nation of weak believers who have been reluctant to love the Lord their God with all our minds – fearing that an examination of the sciences would challenge our faith.  Thus we have deprived our children of the true blessings of loving God fully and completely.  This deprivation has not only weakened the faith of many, it has also weakened their commitment to stay faithful, to persevere, to overcome, and to repent. Consequently, they have become spiritual cowards who are unable to provide a reason for their faith and are unable to stand against the wiles of the devil.  Perhaps they should be reminded that cowards are the first thrown into the lake of burning fire (Rev. 21:8).

This apostasy has given birth to an apathetic and lawless culture.

What happens when a people start worshiping the creation instead of worshiping the Creator was prophesized in Romans 1:18ff. They do what’s right in their own eyes, which includes all manner of unrighteousness that they can now justify. Worse, all things become a personal choice, protected by the politically correct police. The progression of this apostasy then leads to the progression of lawlessness according the principles and precepts of God.

It has been said that legislators cannot write laws fast enough to govern a people that will not govern themselves.  The progression then leads to the loss of our liberties as the government must now create regulations and laws to govern the lawless.  This results in the manifestation of another biblical truth that tells us that where the Spirit of the Lord is, there is liberty – or in our case the reverse, where the Spirit of the Lord is asked to leave, liberties go with Him. It then follows that where people are willing to turn a blind eye to their own lawlessness, they are also willing to turn a blind eye to the lawlessness of their representatives.  When this happens, the culture of unrighteousness establishes a stronghold in the private and public aspects of life – and it all started with apostasy.

The battle lines are drawn and obvious to some but apparently remain invisible to those who are willfully blind. To be clear, this battle is not between two conflicting political ideologies.  This battle is between God and the lawless one. And every human being that walks the face of the earth in these days has to make a choice:  will they obey godless laws and the one who created them or will they obey God? Your decision will determine which side of the line you stand on – with God and those who worship Him, or with the cowards, with the apathetic, with the enemies of the Creator? Those who have studied and believed in the Word of God know how the story of civilization ends. Therefore, to those who stand with God, I say: be strong and of good courage for it is written that eventually we will overcome.