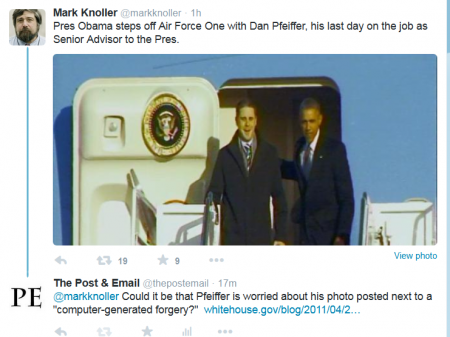 Knoller provided a photo of Pfeiffer with Obama debarking Air Force One.

The Post & Email replied to Knoller by asking the question, “Could it be that Pfeiffer is worried about his photo posted next to a “computer-generated forgery?” http://www.whitehouse.gov/blog/2011/04/27/president-obamas-long-form-birth-certificate …” in reference to the long-form birth certificate image posted on the White House website on April 27, 2011 which was later declared a forgery by a law enforcement investigation.

On February 4, major media announced that Pfeiffer would be departing within the next four weeks.

The Maricopa County, AZ Cold Case Posse launched an investigation into the birth certificate image in September 2011 and found within several days of testing that it could not have originated with a paper document.  After nearly six more months of investigating, including a trip to Hawaii to obtain answers about the alleged original held by the health department, on March 1, 2012, lead investigator Mike Zullo and Maricopa County Sheriff Joe Arpaio presented the posse’s findings that the image, as well as Obama’s purported Selective Service registration form, are “computer-generated forgeries.”

At the time of the image’s publication, Pfeiffer was White House Communications Director.

Knoller has not acknowledged numerous tweets from The Post & Email regarding the forgery, and, like other major media, CBS News has not broadcast the findings to the public.

Arpaio has publicly decried the media’s lack of engagement in what he has described as a “national security” issue.  Many are now voicing frustration with the media for failing to vet Obama during his first presidential election when reports that he was born in a foreign country and might not qualify as the constitutionally-required “natural born Citizen” began to surface.

Last year, Zullo announced that the identity of the forger is known and rejected arguments from Obama supporters that a particular type of Xerox machine could produce the image in its current form with identified anomalies.

According to The Washington Post, coworkers of Pfeiffer’s said that he “had a hand in virtually everything the White House did as he sought to coordinate the message between the West Wing and the vast government bureaucracy.”

To recognize Pfeiffer’s last day on Friday, Breitbart News noted that Pfeiffer “was really good at trolling reporters” and that he “claimed that Barack Obama didn’t have the power to grant executive amnesty,” supporting the latter statement with a video.  Pfeiffer was also well-known for his absorption with his Blackberry, which he reportedly forgot to take with him on his last day on the job.

Breitbart reported that Pfeiffer often used profanities in his dealings with others.

Through a new personal Twitter account, Pfeiffer tweeted his reflections on what he believes was accomplished since he has worked for Obama over the past eight years.

In his farewell message, Pfeiffer called the internet a “performance enhancing drug for politics” and said that new innovations since Obama entered the White House have provided increased opportunity “to engage the public.”

As to his reason for resigning at a time when he believes that Obama’s remaining time in office will be “incredibly exciting,” Pfeiffer said, “It’s just time.”

Pfeiffer stated that he still considers himself a part of the regime “family.”

Last March, Arpaio and Zullo were expected to announce new findings stemming from the birth certificate investigation gleaned from a second investigation opened by Arpaio at an unannounced time.  However, Zullo later explained that new information discovered shortly before that time opened a new direction for the probe, which required a delay in any press conference which might be scheduled.

In interviews since last spring, Arpaio has hinted that new information could be released to the public, although unlike Zullo, he has not confirmed that the identity of the forger is known.

Pfeiffer’s departure comes at a time when Obama’s first Secretary of State, Hillary Clinton, has been highly criticized over revelations that she used a private email server for all of her official communications.  On Thursday, government watchdog Judicial Watch’s president, Tom Fitton, told Fox News that Clinton could be charged criminally for her actions.

Also on Friday, Democrat Sen. Robert Menendez was identified as the focus of a criminal probe by the Obama Justice Department for allegedly abusing the power of his office following his outspokenness statements on Obama’s Iran policy.  Menendez has allegedly been under investigation for more than two years in a matter involving underage females in the Dominican Republic.