ARE OBAMA SYCOPHANTS GETTING A LITTLE NERVOUS?

Quoting Christie when he said to the audience, “What we lack in America today is a national leader who we feel we truly know. A national leader who will tell you who he or she is. Where they’re from and how they’ve come to believe the things that they believe in,” Parker responded by claiming that “Republicans have bludgeoned an idea that Obama was born in Kenya which would disqualify his presidency.”

Christie made no mention of Obama’s alleged birth in Kenya, although the Kenyan Parliament, the former Kenyan ambassador to the U.S., Obama’s own literary agent, and several news sources, including NPR, all reported him as born in the East African country.

Obama’s biography did not reflect his claimed birth in Hawaii until 2007, two months after he had declared himself a presidential candidate.

Rep. Steve King, who co-hosted the event with Citizens United, has said that while he does not know where Obama was born, he senses that Obama was “not raised with an American experience.”

No hospital anywhere in the world has claimed Obama’s birth, and why his birthplace to this day cannot be determined remains a mystery.

Parker alleged in his article that “conspiracy theories” have arisen claiming that Obama “presented a forged copy of his birth certificate,” presumably indicating the image posted on the White House website since April 27, 2011, which a criminal investigation by the Maricopa County Cold Case Posse spanning more than three years has determined is a “computer-generated forgery.”

Several months ago, posse lead investigator Mike Zullo stated that the identity of the forgery is now known.

Parker, who obviously is not fond of Republicans, might have extrapolated more from Christie’s comments than was actually stated when he claimed that Christie’s reference to Obama’s lack of transparency indicated that Obama “is Muslim.”

Fox News and other outlets invoked the same assumption after Obama, while visiting India, said, “There have been times where my faith has at times been questioned by people who don’t know me, or they’ve said that I adhere to a different religion, as if that were somehow a bad thing.”

Obama’s former pastor, the Rev. Jeremiah Wright, had said that Obama was “steeped in Islam” when he came to the Trinity United Church of Christ in the early 1990s, where Black Liberation Theology is preached.

Blogger and author Pamela Geller stated of Obama’s comment, “What is a ‘bad thing’ is that Obama is a pathological liar, and he has hidden so much from the American people, it’s hard to know what is and isn’t true.”

Morsi was a lifelong member of The Muslim Brotherhood and supported by the Obama regime.

On January 28, The Washington Free Beacon reported that an Egyptian judge, who was part of the delegation visiting the State Department, “flashed the Islamist group’s popular symbol in his picture at the State Department and wrote in a caption: ‘Now in the U.S. State Department. Your steadfastness impresses everyone,’ according to an independent translation of the Arabic.”

Two days later, The Free Beacon wrote, “Just days after a delegation that included two top Brotherhood leaders was hosted at the State Department, the organization released an official statement calling on its supporters to ‘prepare’ for jihad, according to an independent translation of the statement first posted on Tuesday.”

Obama has shown open hostility to Israeli Prime Minister Benjamin Netanhayu on numerous occasions and said that the sound of the Muslim call to prayer is “one of the prettiest sounds on earth.”  He claimed that Islam has played a major part in the history of the United States, having omitted the scourge of the Barbary Pirates with which President Thomas Jefferson was faced in the early days of the nation.

At the United Nations on September 25, 2012, Obama sternly proclaimed that “The future must not belong to those who slander the prophet of Islam,” a line omitted from a New York Times report of the event.  “I have known Islam on three continents,” Obama has told the world, after invoking his “Muslim faith” with ABC’s George Stephanopoulos in a 2008 interview.

Curiously, Obama supporters do not question these facts, nor even mention them.

Obama has hired and consulted with Islamics with known ties to Brotherhood-related groups and congratulated the Islamic Society of North America on its 50th anniversary convention.  According to a mainstream press release, ISNA is:

…an Independent non-profit democratic institution, was originally founded in 1963 and is one of the largest and oldest Islamic umbrella associations in North America. Based out of Plainfield, Indiana, its mission is to provide Muslim organizations and individuals with a common platform for presenting Islam, supporting Muslim communities, developing educational, social and outreach programs and fostering good relations with other religious communities, and civic and service organizations. Our office in Washington, DC works closely with the federal government and the interfaith community to build bridges of understanding with people of all faiths.

According to The Investigative Project, ISNA has ties to Hamas and The Muslim Brotherhood.

On the same day as Obama’s address to the United Nations in September 2012, a whistleblowing report was issued from a federal prison by 2Lt. Scott Bennett on the funding of Islamic terrorist groups through Swiss bank accounts, most notably the Union Bank of Switzerland (UBS).  One of Obama’s major presidential campaign bundlers was chairman of a subsidiary of the company, UBS Americas, and holds a position on Obama’s Economic Recovery Advisory Board.

Despite being a military officer, Bennett was tried and convicted in a civilian court by a judge with ties to the law firm, Covington & Burling, which has represented UBS.  Putative Attorney General Eric Holder worked for the firm for several years, and former Assistant Attorney General Lanny Breuer is now a partner there.

The Obama regime has prosecuted more whistleblowers than all other administrations combined.  It has marginalized, harassed, intimidated and threatened journalists, including naming Fox News reporter James Rosen as an “aider, abettor and/or co-conspirator” in a leak case involving a State Department employee.

Parker concluded in his piece that Christie was “rendering a final apprehension of ‘The Muslim Obama. With a fake birth certificate. In the White House.’  But Christie did not utter any of those words (begins at 17:54) and spent only a minute or two making references to Obama without naming him.

Nevertheless, Parker’s description of Obama may be factual.

While addressing the audience, Christie spent exponentially more time speaking about his pro-life views and the Founding Fathers than about Obama.  Christie’s use of the words “‘imperialist;, ’emperor’, and ‘king’” as quoted by Parker were expressed to reflect the desire of many Americans to control their government and their own destinies rather than allowing the government to control them.

Parker claimed that during his speech, Christie “dealt with emotions and feelings” rather than facts.  He misspelled the homonym “sighted” and mistakenly used the word “routs” for “routes.”

Parker excoriated Republicans’ opposition to Obama’s policies, stating that “They have sued or promised litigious action on a number of Obama agendas even though their despicable push back represent acts of treason.”

George W. Bush was also accused of treason during his presidency when he said that “Sen. Barack Obama and other Democrats are in favor of ‘appeasement’ of terrorists in the same way U.S. leaders appeased Nazis in the run-up to World War II.”

The definition of “treason” is:

On August 1, 1776, Samuel Adams described the new nation he helped found as having been born from “the animating contest of freedom,” admonishing those who would exchange liberty for security.

The Trentonian allows comments without the user having to register.  At the time The Post & Email began writing its article, there were three comments, all discussing the question of presidential constitutional eligibility or the declared forgeries of Obama’s identification documents.

An initial comment submitted by the Post & Email referencing the Cold Case Posse’s investigation with a link to its website did not survive the moderation process.  A second comment ultimately met the same fate. 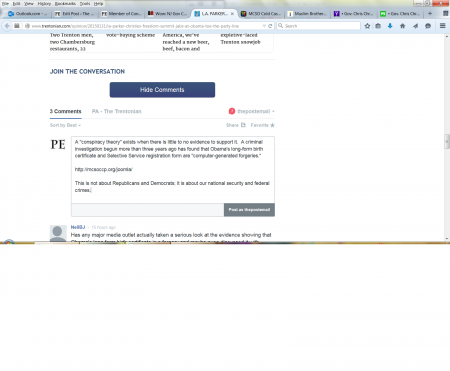 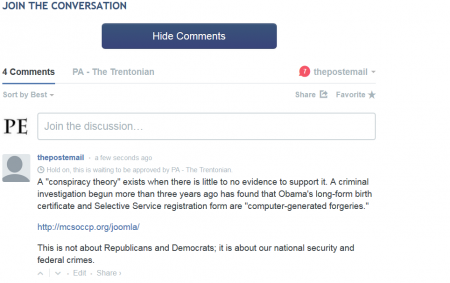 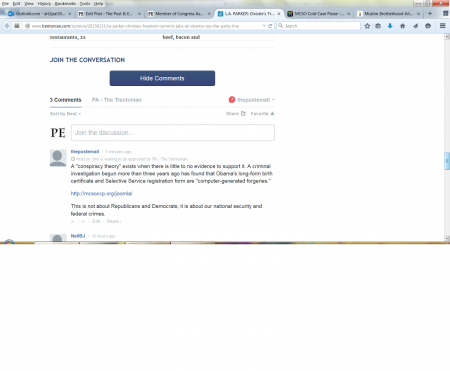 The same phenomenon has occurred for this writer at such “conservative” websites as Twitchy, Breitbart and The Washington Examiner.

“Facts are stubborn things; and whatever may be our wishes, our inclinations, or the dictates of our passions, they cannot alter the state of facts and evidence.” — John Adams