“EVERY CORNER OF THE NATION” 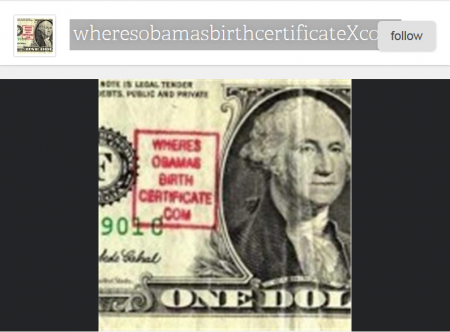 (Feb. 1, 2015) — On Friday, Mike Volin, founder of WheresObamasBirthCertificate.com and the radio show by the same name, divulged the recipients of thousands of Sheriff’s Kits over the past two months.

In September 2011, Zullo and four other posse members were commissioned to launch an investigation into the image posted on the White House website on April 27, 2011 after 250 Tea Party members approached Maricopa County Sheriff Joe Arpaio with concerns that their votes would be disenfranchised in the 2012 presidential election.  Arpaio agreed to have the image investigated by the posse so that no costs would be incurred by taxpayers.

After 72 hours, the posse concluded that the image could not have originated with a real, paper document.

On March 1, 2012, Zullo and Arpaio gave a press conference in which they told the public that there was probable cause to believe that the birth certificate and Selective Service registration form bearing Obama’s name are fraudulent.  On July 17, 2012, a second press conference confirmed that the suspicions of the posse had surpassed the standard of probable cause.

The media and Congress have taken no independent action on the posse’s findings.

In May 2013, Zullo gave a presentation to the Constitutional Sheriffs and Peace Officers Association (CSPOA) at its annual meeting in St. Charles, MO on the forgeries which was replicated on the Sheriff’s Kits.

Since their production in July 2013, Volin and a number of volunteers have distributed the Sheriff’s Kits to members of Congress, law enforcers, the media, state legislators, and average citizens.  They have conducted in-person meetings with congressional staffers and congressmen, mailed hundreds of kits to citizen volunteers for distribution, and included candidates for political office in their outreach.

At 14:14 in the broadcast, Volin brought on Kerchner, who also runs the Protect Our Liberty website, to speak about the mass mailing project.  In his opening remarks, Kerchner announced the untimely passing of Daniel Haggerty, who, with Atty. William Baer, had hosted the Baer/Haggerty Offensive radio show dealing with constitutional issues.  “He was a great patriot, a strong constitutionalist and was fighting every single day to expose the usurper-in-chief” Kerchner said of Haggerty, with a reference to Obama’s questionable eligibility for office.

Obama’s constitutional eligibility has been questioned since late 2007, when commentator Chris Matthews stated on air that Obama was “born in Indonesia.”  Article II, Section 1, clause 5 of the U.S. Constitution requires that the president and commander-in-chief be a “natural born Citizen,” although much debate about the term has transpired since Obama’s candidacy in 2008.

Obama has not released his college applications, passport applications, school or medical records for public scrutiny.  Between 1991 and April 2007, Obama’s official biography stated that he was “born in Kenya and raised in Indonesia and Hawaii.”

At just past the 22:00 mark, Kerchner told the audience that he conceived of an idea in November that a sheriff’s kit be “sent to every single sheriff in this country.”

Kerchner said volunteers helped to package the DVDs over a five-week period totaling approximately 3,300 pieces.  He also revealed that “every single governor and all the attorney generals [sic] and every new Republican member of the new Congress” received a kit with an “action statement” included in each.

Volin explained that the recipients of the mailing were kept secret so that the project would not be derailed midstream.  He stated that he has received some response, including a Christmas card from one recipient.  Volin said that follow-up will be completed on the mailings.

Kerchner said that “major funding” was needed to complete the project which he and Volin provided with assistance from donors.

Volin said that the kit was updated recently to include Sheriff Joe Arpaio’s contact information.  The kit is also downloadable from Volin’s website.

Kerchner said that “every corner of the nation” has now been informed of the findings of forgery in Obama’s only proffered documentation.

Also on Friday, on his “Freedom Friday” radio show, host Carl Gallups provided a brief update on the criminal investigation which stated that the probe remains ongoing and that Zullo and Arpaio expect to release their findings to the public at some point in the future.

To date, Arpaio has been the only sheriff who has undertaken a forensic examination of the birth certificate image.  A federal judge recently set a trial for contempt against Arpaio in April.

Arpaio has filed a lawsuit against Obama’s declared changes to immigration law on November 20.

One Response to "DVDs with Evidence of Fraud, Forgery Mailed to All U.S. County Sheriffs, Governors, Attorneys General"