BUT WHAT OF PRESIDENTIAL ELIGIBILITY?

(Jan. 13, 2015) — In his daily video on Tuesday, political pundit Dick Morris ruminated over whether or not Sen. Marco Rubio “can win the GOP nomination and the presidential election.”

Morris said that when Rubio was elected to the U.S. Senate in 2010, he was part of a “triumvirate” considered “conservative” which included Sens. Rand Paul of Kentucky and Sen. Ted Cruz of Texas.

Reminding his listeners that Rubio had joined the “Gang of Eight” to draft an immigration bill which many “conservatives” vehemently opposed, Morris speculated that Rubio had not held to the principles which elected him and might “have a very hard run at the nomination.”

An ABC News article also published Tuesday titled “Marco Rubio Sharpens His Potential 2016 Pitch” describes Rubio as a “Cuban-American.”  ABC reported that “Rubio said he’ll jump in the 2016 race if no one else in the Republican field puts forward an economic agenda like his — even if that means running against his one-time mentor, former Florida Gov. Jeb Bush.”

Agreeing with Morris, ABC said that Rubio won his Senate seat as a result of support from the Tea Party movement but “quickly made friends with the Republican establishment and made headlines in 2013 by supporting the Senate’s comprehensive immigration reform package.”  ABC stated that after Rubio supported “immigration reform” in the Senate in 2013, TIME Magazine referred to him as “the Republican savior.”

The media is not expected to support or oppose politicians’ stances on issues, but rather, to simply report on them objectively so that the American people can make up their own minds.  Today, the majority of news sources are left-leaning and often allow their opinions to color their “journalism.”

The discovery in 2010 of a private left-leaning chat room named “Journolist” contains such members as The Washington Post’s Ezra Klein, who founded the group; The New York Times’s Paul Krugman; Spencer Ackerman of The Washington Independent; and Jonathan Stein of Mother Jones, among many others. According to The Daily Caller, Journolist members actively attempted to quash stories which they saw as potentially damaging to Obama.  Members also devised a strategy to call anyone objecting to Obama’s positions “racist.”

Neither Morris nor ABC News questioned Rubio’s constitutional eligibility to seek the presidency.

Article II, Section 1, clause 5 of the U.S. Constitution requires the president and commander-in-chief to be a “natural born Citizen.”  Over the years, the term has come to be understood as signifying “born in the United States,” but historically, it involves perceived allegiance through one’s parents.

Left-leaning media failed to vet Barack Hussein Obama as eligible under Article II in 2007, when he first declared his candidacy, or in 2012 for his second presidential election.  In December 2007, MSNBC commentator Chris Matthews stated on air that Obama was “born in Indonesia” and had “an Islamic background,” even positing that fellow primary contender Hillary Clinton could raise the issues in challenging Obama for the nomination.

Matthews clearly supported Obama’s election by exclaiming, “I felt this thrill going up my leg” in a reaction to having heard Obama speak.

According to research conducted by CDR Charles F. Kerchner, Jr. (Ret.) and citizenship attorney Mario Apuzzo, Rubio was born on U.S. soil to a father who was at the time still a Cuban citizen.

Obama claims a birth in Hawaii to a British-citizen father and U.S.-citizen mother.  Some have opined that his allegiance appears to be to “Islam” rather than to U.S. interests, causing four Americans to die in a terrorist attack in Benghazi, Libya on September 11, 2012.

Obama’s defunct campaign website, FighttheSmears, had said that he was born a dual citizen of the U.S. and Kenya. 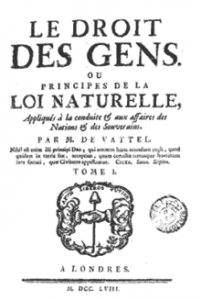 In Emmerich de Vattel’s “The Law of Nations,” considered a valuable reference to the Framers of the Constitution, Vattel wrote in Section 212 that “The natives, or natural-born citizens, are those born in the country, of parents who are citizens. As the society cannot exist and perpetuate itself otherwise than by the children of the citizens, those children naturally follow the condition of their fathers, and succeed to all their rights.”

In Section 220 titled “Whether a person may quit his country,” Vattel wrote:

“The children are bound by natural ties to the society in which they were born; they are under an obligation to show themselves grateful for the protection it has afforded to their fathers, and are in a great measure indebted to it for their birth and education. They ought, therefore, to love it, as we have already shown (§ 122), to express a just gratitude to it, and requite its services as far as possible, by serving it in turn. We have observed above (§ 212), that they have a right to enter into the society of which their fathers were members.”

Obama’s father was never a U.S. citizen.  The eligibility of his 2008 Republican opponent, Sen. John McCain, was also questioned, as McCain was born in Panama to two U.S.-citizen parents, one in the service of the U.S. Navy and stationed in Panama at the time.

Cruz is also widely considered a potential 2016 presidential candidate despite his birth in Canada to a Cuban-citizen father and U.S.-citizen mother.  While Cruz may have been born a dual U.S.-Canadian citizen, he has shown no evidence that his birth was so recorded, and Canada confirmed that he was a citizen until Cruz formally renounced the citizenship in June of 2013.

No person shall be a Senator who shall not have attained to the age of thirty years, and been nine years a citizen of the United States and who shall not, when elected, be an inhabitant of that state for which he shall be chosen.

Bloggers, including Kerchner, attempted to raise the Obama presidential eligibility issue to alternative media early in Obama’s first term, including Glenn Beck.  Others have written to radio show host Mark Levin and others on the topic.  Levin has more recently stated that he believes that Cruz is a natural born Citizen.  The subject of Obama’s questionable eligibility has been avoided by the mainstream media, even when Obama’s Selective Service registration form and long-form birth certificate were declared “computer-generated forgeries” nearly four years ago by a law enforcement investigation.

The Constitution of the United States puts a particular qualification upon those who shall become President and Vice-President. For all other offices it requires that they be “citizens of the United States,” but for the Presidency and Vice-Presidency it requires that they be “Natural Born citizens.” The word “natural” means “of the nature of”; “naturally a part of”; “by the laws of nature an integral part of” a system. Following that line of thought, a “natural born” citizen would be one who was naturally, at his birth, a member of the political society; naturally, a part of the political system into which he was born; by the laws of nature a citizen of the society into which he was born. It would mean, further, that no other government had any claim upon him; that his sole allegiance was to the government into which he had been born and that that government was solely, at the time, responsible for his protection.

Long then distinguishes between “natural born” and “native born:”

“Native born” does not mean quite the same thing. He might be born in a country under conditions similar to the conditions under which Mr.Hughes was born, and subsequently become a citizen of that Country. In that case, after he became a citizen, he would be a “native born” citizen, but he would not have been a “natural born” citizen. From the instant of his birth this government would not be solely responsible for his protection.  Mr. Hughes was born before the adoption of the Fourteenth Amendment to the Constitution, so the status of his citizenship must be considered as under the laws existing prior to the time of the adoption of that Amendment. The only reference in the Constitution to the subject (except that Section specifying the qualifications for President) is that Congress shall have the power to make uniform laws to provide for naturalization. Congress under that authority enacted the following law: “The children of persons who have been duly naturalized under any law of the United States, being under the age of twenty-one years at the time of the naturalization of their parents, shall, if dwelling in the United States, be considered as citizens thereof.” That Statute says that children born of persons who have been duly naturalized become citizens, but become so by virtue of the act of the parent. That is, they become naturalized citizens. They are citizens by operation of law. They were not born so, but, because of the act of their father, are invested with all the rights of citizens. If they are born in this country and their father subsequently becomes naturalized, they then, upon the naturalization of the father, become citizens. After becoming citizens they are “native born” citizens; but they are not “natural born citizens.” That is, they are not born, in the nature of things and by the laws of nature, a citizen of this Republic…

Prof. Herb Titus appears to agree with Long in his explanation of the intention of the 14th Amendment contrasted with the term “natural born Citizen,” which appeared in the U.S. Constitution “from the very beginning.”

Rand Paul, who is likely a natural born Citizen, may also seek the presidency, although he is currently promoting his campaign for re-election to the Senate.  Jeb Bush, who reportedly “mentored” Rubio, is also expected to run and has resigned from all boards of directors on which he served following his two terms as Florida governor.

At the end of his commentary, Morris predicted that because of some of the positions he has taken, “Rubio probably will lose the center-right constituency…to Jeb Bush, and I think he’ll probably lose the Tea Party constituency to Ted Cruz.”

Morris said that because Rubio would have to vacate his Senate seat, which could go to a Democrat, he would face considerable pressure not to run for president.

In an online straw poll, the Republican Party includes South Carolina Governor Nikki Haley; Ron Paul, Rand Paul’s father and a former congressman from Texas; Rubio; Cruz; former U.S. Senator Rick Santorum, who was reportedly born in the U.S. to a father who was still a citizen of Italy; Wisconsin Governor Scott Walker; and Louisiana Gov. Bobby Jindal, who was born in the U.S. to two parents possessing Indian citizenship.

Prior to press time, The Post & Email contacted the Republican Party for comment on the “natural born Citizen” issue and was given the email address of a media representative who is “out of the office this week” but can receive email.

Our communication with the media representative will be the topic of a future article.