“JUST A FOOTNOTE IN THE HISTORY OF THE HUMAN RACE” 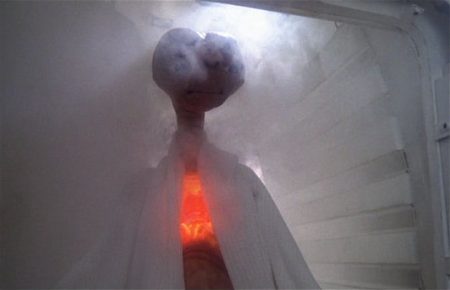 (Oct. 21, 2014) — Roving Reporter: “Good evening, radio and television audience. The reason the Declaration of Independence is on your screen is that we got a very strange request from an outfit that calls itself ‘Doctors Without Orbits.’ Maybe they meant to say ‘Doctors Without Borders,’ but the following stipulated conditions make one wonder, like we are to meet them at the 8th hole of an unnamed golf course. Well, here we are. They also said ‘no cameras,’ so we even didn’t bring our phones, just to keep our side of the bargain.

“I see a bright light directly above us, and here comes a 1960 silver VW Microbus. Wasn’t there a play about an Alien landing in a cornfield in a VW? Here it comes, and it sounds just like a VW downshifting. We better move back a little bit. It’s about to land. It looks like a hand holding a flashlight out the driver’s window lighting the way.

“It landed! Either this is some kind of put-on or it’s the real thing! A visitation by Aliens! Wow! Is this the story of the ages or not? Wait. The engine just shut down; the engine access door at the rear is opening; and, look at that, an Alien in a silver spacesuit is stepping out.”

Alien: “Anybody bring some spare batteries? Mine are about shot. Some darn fool painted over my headlights. I guess you noticed. Well, I can see you got my email. Thanks for showing up.”

Roving Reporter: “Wait! This is all wrong. Aren’t you supposed to say, ‘Take me to your leader?’”

Alien: “You didn’t see the play, or weren’t you paying attention? Look, we’ve been through this before. I’m here to give you guys a medical report. It’s a service we provide for the ‘very, very nervous,’ and if any group of people needs help, you guys fit the bill. Listen, this service is free of charge. We stop by, tell you what’s what, and leave you to your own devices. Either you’ll straighten up or you won‘t. It’s up to you. The operation parameters of ‘Doctors Without Orbits’ state that we operate only in an advisory capacity, okay?

“Now I don’t have a lot of time because you’re not the only dysfunctional people out there who need some good advice, so I’ll make this short and sweet.”

Roving Reporter: “Who are you? Where are you from, and where’d you get that VW bus? And why is there a flashing blue light atop of your football helmet?”

Alien: “I prefer ‘space helmet,’ if you please. The blue light is to remind me that I am humble and prone to err, so that’s enough of me. I’m here to talk about you.

“Do you people ever look at yourself in the mirror? Ever sit down and listen to the complete and utter nonsense that is spoken, and in such a way that it makes some kind of convoluted and warped sense, at least in your minds? Obviously, you people have absolutely no idea of how far out there you are, how far out from reality you are. Surely a form of insanity.

“Look, I’ve got to take off soon, so listen up: you people actually take the time and make the effort to talk about nonsense. You discuss something that you shouldn’t waste your time on. I’m talking about your borders, including the borders at your airports. You take a subject that should be a given and twist it around as if there’s a choice. Look, there’s no choice; it’s not as if there’s even a question. Get it together, can you do that? It’s not political. Close your borders against invaders, be they an Ebola virus or any illegal immigrant. Use the brain that the Good Lord gave you; do you think you can do that? Letting Ebola-infected people and illegal immigrants in is nothing other than a symptom of a pathetic behavior problem that stems from not fully comprehending the ‘defend and protect’ part that is (or should be) every citizen’s responsibility.”

Roving Reporter: “Wow, that was sure nice of you to stop by. Do you think anybody will listen?”

Alien: “Nobody will listen, just as nobody cares anymore about your Constitution being trashed during LTC Terry Lakin’s Court Martial, and nobody cares about who gave the ‘stand-down’ order that resulted in four of your troops being murdered in Benghazi. You’re letting Hilary and Obama get away with murder and you don’t care. You people are all nuts, and if you don’t face up to it and admit it, you’re nothing but a footnote. Bye.

“Wait! I almost forgot. Your country’s obsession with the border and catering to illegal immigrants and allowing Muslims in your country is indicative of a much more serious problem. The USA knew her place in the world after World War I, but you lost your way. Now you’ve got a bunch of citizens who hate America, Democracy and Capitalism. Your Hillary is a Marxist, a die-hard Socialist, and you’ve many citizens who are just dumb enough to follow her to the ‘Gate of Hades.’ Bye.”

Roving Reporter: “Well, that was, if nothing else, to the point. And there goes our Alien back into the bus. Now the engine starts and up and away it goes.

“So, to sum it all up, we just had a visit from ‘Doctors Without Orbits,’ who advised us to pay attention, but he, or maybe it was a ‘she,’ doesn’t think we have the moxie to do the right thing. This Alien thinks we don’t have what it takes and the USA will soon be just a footnote in the history of the human race. Well, speaking for myself, I hope we can prove the Alien wrong, that we’ll persevere and save our Constitution after all, but certainly not with the likes of Hillary or Obama being allowed to get away with murder.

“Thank you for listening to our program tonight. This is Roving Reporter saying stay safe by being armed and supporting our 2nd Amendment and, until next time, goodnight.”