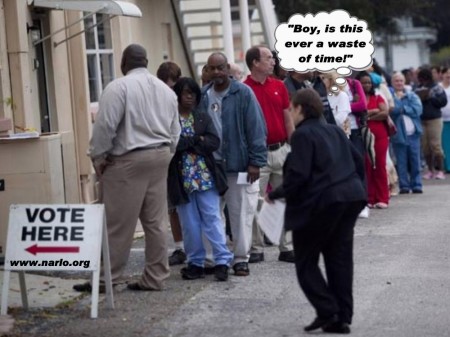 (Oct. 19, 2014) — Perhaps the fact that we have seen millions voting themselves into complete dependence on a tyrant has made our generation understand that to choose one’s government is not necessarily to secure one’s freedom.  —  Friedrich August von Hayek, economist, philosopher

But these statistics don’t even begin to tell the real story, why did the people vote in the first place?  Below are a few of the reasons why people vote, especially for a male president.  The list is in no particular order of importance.

(NOTE: A female candidate for president has not appeared on the scene until now, with Hillary Clinton, wife of the philanderer and ex-president Bill Clinton, warming up in the bullpen for 2016 ….. maybe!)

Here’s the rub.  A Constitutional Republic, without a knowledgeable and participatory electorate, will not work and is doomed to fail as a free republic.   This is not a new revelation.  Thomas Jefferson put it this way:  “Educate and inform the whole mass of the people… They are the only sure reliance for the preservation of our liberty.”

There is no question America is in the process of failing and failing miserably.  It is failing for all of the reasons that we mentioned in a previous article entitled, “Too Many Americans, Shallow, Hollow and Just Plain Stupid.”  Not only are way to many people of America not knowledgeable, they participate in the electoral process of their country at an abysmal rate.  However, perhaps it is a good thing that well over 45% of the voting age population doesn’t bother to vote because if they did, America would have become a socialist country much sooner.  Add in millions of illegal, ignorant peasants from third-world countries thirsting for amnesty the Democrats can’t wait to give them, and you have the recipe for a complete breakdown of our Constitutional Republic into mob rule.

Finally, well over half of the voting-age population, whether they vote or not are, let’s face it, shallow, hollow and just plain stupid.  It is debatable just how informed the other voters are about the issues.  Of course, given the state of our public indoctrination system, it is no wonder that the masses are so ill informed of the substance of the American Republic and the reasons why she gave birth to the only true constitutional freedom on the planet.  Sadly, these ill-informed, dumbed-down, shallow, hollow and just plain stupid people are and can be voters under our system of government, which has morphed from a Constitutional Republic into a vote-of-the-mob Democracy.  Is it any wonder that Democrats want every voter to vote when their give-away platform appeals directly to a growing population of the least informed among us, as well as a horde of illegal aliens waiting for amnesty?

It would appear that if the collective goal is to restore American freedom, as envisioned by the Founding Fathers under the foundation of the U. S. Constitution, voting has lost its ability and its power to accomplish that goal by itself.   Anyone who thinks otherwise is living in Alice in Wonderland.  So now what?

Many solutions have been offered by well meaning individuals on how to restore America to its pre-ordained greatness under a flag of liberty.  So far, none of these solutions have shown any promise.  But these are the facts.  Only a hardened, well-trained army of millions of dedicated and determined civilians of one mind can peacefully take back America from a lawless, out-of-control, rogue government, at every level.  Those millions have not coalesced under any leader, organization, or any flag and probably won’t, given the divided atmosphere and apathy that exists in America today.  Unfortunately, the Tea Party is a relatively small group of Americans and has no real leader.  Nevertheless and even if they are rudderless for the moment, the Tea Party is a start.

The only other way to restore American freedom is to trigger a massive, collective outrage in the population.  To create that outrage it would only be necessary to assemble small, dedicated groups of people in each government division, from the state level down to the county and local level.  These small groups would investigate and expose government for what it has become.  In the coming weeks and before the end of the year, we will be announcing our plan for a small “army” of determined souls that will take on government at the local level and literally rip them apart in a massive investigation of malfeasance, misfeasance, misappropriation of funds, graft, corruption, racketeering, double-dealing, collusion and improper or illicit personal behavior.

Unfortunately, government, at all levels, has become rife with these maladies, as a collective apathy has consumed the public over the last 100 years.  Since there is little to no accountability, government is free to do whatever it pleases and it has.

Basically, human nature predisposes people to respond positively or negatively to their emotions.  It has always been thus.  To “reach” them you have to appeal to that emotion.  That’s what politicians do, under the umbrella of propaganda, hype, distortion and outright lies.  Anger and outrage are emotions that trigger the distinct possibility of action.  As a general rule, clear-thinking Americans hate corruption and if a large enough group of Americans determine that corruption has taken place, history has proven that they will react against it.  Right now, no one is exposing this pandemic graft and corruption in government on a grand scale.  We intend to change that.

Politicians and government employees, when they see their corrupt antics exposed and then published for a local and national audience, will either start to straighten up, or disappear in disgrace.  Calls for their resignations or their heads will increase daily.  Firings of corrupt government officers and employees will become more frequent.  Special interest laws and legislation will be inhibited.  Adherence to constitutional principles will be emphasized.   New political blood with honor will begin to surface.  Once this exposure takes hold nationally, politicians and government officers and employees will begin to get the message and act accordingly.

Are the actions we are proposing a panacea for all of our nation’s ills?  Hardly!  But it’s a step.  Will they solve our foreign problems such as Putin, ISIS or Ebola?  Of course not!  However, at the domestic level, the collective disease of Progressivism has infected and infiltrated every one of our institutions and politicians of both parties, along with the body politic, and will have to be systematically rooted out over a significant period of time if there is any chance of saving this once-great country.  That can only be done if the graft and corruption is exposed to the entire population of America, through all means of communication.

It took over 150 years for the colonists to extract themselves from the King of England’s dictatorial rule and they had to do it by revolution.  Peacefully restoring America to its rightful place as the shining city on the hill could easily take generations and will only happen if the American people, in large enough numbers, have the courage and the determination to embark on the dangerous and perilous path to freedom, even though the price will be high.

The reader may jump to the conclusion that we are suggesting that people don’t vote.  Nothing could be further from the truth.  Voting is still an important part of an American’s duty and should be done by carefully studying the issues and the candidates.  What we are saying is, voting cannot be the only solution to what ails America and will not, of and by itself, solve the complicated issues that face us as a people and as a nation.

NOTE:  We would like to take this opportunity to thank and applaud Devvy Kidd for her considerable efforts to strike down the 17th Amendment by her recent lawsuit filed in Texas.  She is trying to prove that the 17th Amendment was never ratified and is therefore null and void.  If she prevails, she could bring political power back to the states where the Founding Fathers thought that power should reside.