If the Government Should Become Oppressive, as he Verily Believed Would be the Case

AN “EXCESSIVE CONCENTRATION OF POWER” 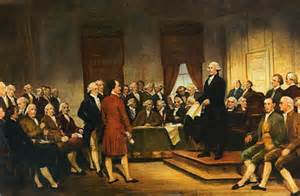 (Oct. 19, 2014) — Drawing in large measure on a well-written legal brief on Article V, I have learned the following:

On September 12, 1787, the Committee of Style delivered its report of the Constitution as revised and arranged.  Article V read as follows:

“V. The Congress, whenever two-thirds of both houses shall deem necessary, or on the application of two-thirds of the legislatures of the several states, shall propose amendments to this constitution, which shall be valid to all intents and purposes, as part thereof, when the same shall have been ratified by three-fourths at least of the legislatures of the several states, or by conventions in three-fourths thereof, as the one or the other mode of ratification may be proposed by the Congress; Provided, that no amendment which may be made prior to the year 1808 shall in any manner affect the and sections of article.”

On September 15, 1787 the Constitutional Convention reached discussion of Article V. Colonel Mason spoke against the amendatory article. He focused on his concern that Congress could prevent the proposing of amendments. On the back of his copy of the draft Constitution, Mason wrote the following:

“Article 5th. By this Article Congress only have the Power of proposing Amendments at any future time to this constitution, & shou’d it prove ever so oppressive, the whole people of America can’t make, or even propose Alterations to it; a Doctrine utterly subversive of the fundamental Principles of the Rights & Liberties of the people[.]”

Mason’s notes served as the basis for the comments he gave on the convention floor, which were recorded by Madison:

“Col. Mason thought the plan of amending the Constitution exceptionable & dangerous. As the proposing of amendments is in both the modes to depend, the first immediately, and in the second, ultimately, on Congress, no amendments of the proper kind would ever be obtained by the people, if the Government should become oppressive, as he verily believed would be the case.”

As a result of these concerns, Gouverneur Morris of Pennsylvania and Elbridge Gerry of Massachusetts “moved to amend the article so as to require a Convention on application of 2/3 of the Sts…”

The Convention unanimously agreed to the motion by Morris and Gerry, thus acceding to Mason’s request to re-insert the convention method of amending the constitution into Article V.

Thus today we are presented with the very concern that George Mason feared: That “the [federal] Government should become oppressive”.  Fortunately for us, George Mason inserted the People’s saving grace:  A state-called Convention to Propose Amendments which is what I now believe is necessary to save the Union from the excessive concentration of power in federal hands.

If the Government Should Become Oppressive, as he Verily Believed Would be the Case added on Sunday, October 19, 2014