Why I and millions more Americans don’t watch O’Reilly any more:

O’Reilly isn’t STUPID … he’s COMPLICIT – in the treasonous conspiracy to cover up “the greatest hoax ever perpetrated on the American people!” (© 2012 Clint Eastwood).

In this 59-second clip from his July 31, 2014 ‘O’Reilly Factor’ broadcast below, Bloviating Bill confirms, by his agreement with now complicit Heather Nauert, that the amateurishly-forged and fraudulent Certificate of Birth that Zero (Obama) has posted as a valid document on a government website is his valid ‘Birth Certificate’ … and that Zero is not a Muslim (“Can we stop with the Muslim thing, please. Can we just stop that?”)

You would think that his ‘people’ would at least be able to read DrudgeReport.com headlines and report back to him: 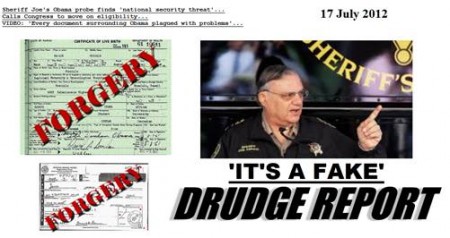 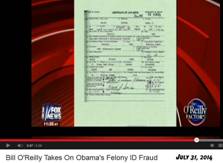 We do no bloviating here. So that you may know where the spin stops with me, and millions of real Americans, let me say this:

It is an act of TREASON for an unknown entity and admitted non-natural born Citizen of the U.S. to usurp the Office of President of the United States using proven-to-be-forged ID’s (Certificate of Birth & Selective Service Registration) and a self-published SS# 042-68-4425 that fails the government’s own E-Verify and SS# Verification systems for employment in the United States.

Paying homage to and legitimization of that unknown and undocumented entity who uses forged and stolen identification documents by calling him ‘The President’ is to be knowingly complicit in that act of TREASON!

Therefore, anyone who calls that undocumented entity ‘President’ becomes him or herself a Treasonous Co-Conspirator! (www.TinyURL.com/TreasonousCo-Conspirators).

Why I and Millions More Americans Don’t Watch O’Reilly Any More added on Saturday, August 2, 2014