Freedom Is a Fading Mirage on a Darkening Horizon 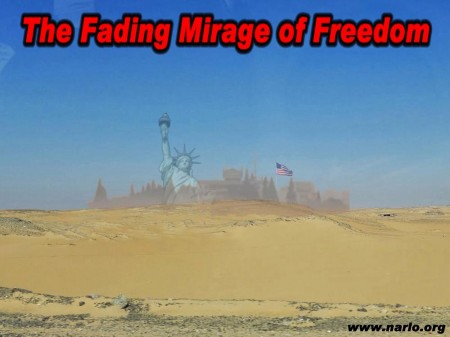 (Jun. 22, 2014) — We have a little experiment we would like you to try outside.  First, wet your finger and put it up in the air.  Then turn your body around until you feel the wind evaporate the moisture on your finger.  Now, open your mouth and blow into the on-coming wind.  Did you feel the wind change direction from the immense power of your breath?  Oh, you say the wind direction didn’t change at all and your breath had no affect on the wind?   That’s the reality of one-man power.  It takes at least the breath of a million one-man powers to change the direction of the political wind.

We decided to look back at all of the articles we have written on freedom, liberty and property rights over the last ten years.  What we discovered was embarrassing, but enlightening.  It appears we have written some 500 articles all saying the same thing, but in a different way each time.  It further appears we have also been blowing into the wind with little or no effect, amounting to nothing less than Einstein’s definition of insanity.

But it turns out that we are not alone.  Thousands of well-intentioned, competent authors are doing the same thing, day in and day out.  They are all saying the same thing, but in a different way each time.  They identify a problem, but the solution to the problem evades them because the solution requires a massive uprising by the people.  Unfortunately, the people are in no mood for an uprising as long as the “free” money from government keeps flowing and the TV is working.  What’s even worse, most people don’t even recognize there is a problem and the government’s benevolent “wind” is just fine with them.

But, ladies and gentlemen, we deal in realities.  Take, for example, “Operation American Spring,” where the purveyors called for millions of Americans to descend upon Washington, DC on a certain day in May 2014 with the goal of bringing down the president and several members of Congress.  The reality is, “Operation American Spring” was an unmitigated failure, as many of us thought it would be.  It was an embarrassment to the purveyors and to those hoping for a positive outcome.  The President, members of Congress, the media and the left laughed out loud at the feeble showing of conservative Americans blowing against the political wind.

Marches on Washington, DC have had little effect on the hopelessly corrupt, giant machine of government, and they always will because the government’s “wind” is still more powerful than the people’s wind.  The march in September of 2009 brought over a million people to Washington DC ….. and nothing changed.  Glenn Beck encouraged hundreds of thousands and maybe over a million to come to the Lincoln Memorial and share their faith together ….. and nothing changed.

Thousands of authors write every day about freedom, liberty, smaller government, fewer taxes, capitalism, free markets and the like ….. and nothing changes.  Obama just lets more people come across our borders and jump on the good ‘ole safety net of our enforced charity.  He lets tens of thousands of illegal children into America and dumps them off on street corners.  He sets tens of thousands of criminal illegal aliens free and then lobbies for immigration reform.

But the sad truth is, if Obama and the left went away tomorrow, it would change very little in America because you see that a silent tyranny, with power much greater than the left or right, is pulling the strings.   This silent tyranny has been pulling the strings for well over 100 years, while the people wallow in ignorance and docile compliance.  Obama, the left and the right aid and abet this silent tyranny and are willing accomplices.  They have no intentions of upsetting their cushy apple cart by outing this enemy that has all Americans up to their eyebrows in debt.

So who is this silent, unseen enemy?  It’s not just one person; it is a cabal of elite persons operating in the dark and behind closed doors, in concert with government and the central bankers, under the impervious citadel of centralized power.  They control the money, the energy, the land, the food, the water and health care.  That is all they need to enslave the masses without the masses ever knowing it.  It has taken them over 100 years to accomplish their task by stealth, but the deed is done and the masses are none the wiser.

Many credible authors have been researching and writing about this enemy, but the masses aren’t paying attention, and the government, the media and academia are complicit.  The enemy’s plan has long been in the works.

This is financial and political power beyond anyone’s comprehension, and this much power can pull the strings of every nation on Earth with little effort.  The fact is, central bankers love socialism and war because it forces governments to borrow more money from central bankers ….. at interest.

With the passing of the 16th Amendment, the first fence of the pig (people) trap had been erected and the pig trough was installed next to the fence.  A few curious Americans wandered into the trap and started nibbling at the food in the pig trough.  Of course a single fence doesn’t look like a trap, does it?  The trap was being laid nevertheless.

The second major step to re-enforce the Dome of Utopia was the Great Depression, the handiwork of the Federal Reserve and unbridled greed.  The second fence of the pig trap had been erected and many more people came to feed at the pig trough, caused by the grief from the contrived Federal Reserve financial meltdown.

The third major step at strengthening the Dome of Utopia was FDR’s New Deal and Social Security.  There were now three sides to the pig trap, and the masses were totally unaware that the last remaining fence of the pig trap and the gate would soon be set in place.  The masses, in ever-greater numbers, kept coming to the pig trough for their sustenance.  The only price they paid for their “free” sustenance was their vote for the party that kept the pig trough full.

FDR went even further than the New Deal and Social Security.  He signed into law by executive order the Emergency Powers Act, which still exists today.  In effect, FDR washed away the blood of countless heroes who claimed freedom as their birthright.  FDR abrogated the Constitution with the stroke of his pen.  An insightful article on the history of FDR’s War Powers Declaration can be read at the following link:

If you don’t read this treatise, you will miss one of the major pillars of the Central Bankers’ Dome of Utopia and the third fence of the expanding government pig trap.

The fourth major step to complete the structure of the Dome of Utopia was President Johnson’s Great Society.  The huddled masses, eager for a savior to lift them up out of poverty, came by the millions to huddle around Johnson’s enlarged pig trough, while the fourth fence in the growing pig trap was erected as they fed.  The central bankers grinned.  But this government-supplied pig trough included more than food.  It included housing, heat, light, water, education, health care and even free cell phones.  It also included a massive change in our public schools from education to indoctrination.  And the masses were in their glory and said it was good and voted for their handlers like the good little compliant pigs they had become.

For decades the left wanted to build the gate to the pig trap to complete the trap in the Dome of Utopia, and the gate was to be built from the fibers of government-run health care.  Hillary tried to construct the health care gate but failed.  The people weren’t quite ready for government-run health care yet, but their time was coming.  They couldn’t know that a false Messiah would soon emerge out of nowhere to complete their long-desired work for them in the form of a half-black man with a silver tongue, an evil mind and a lying heart.

Obama, using the power of a Democrat Senate and House, rammed through the last part of the pig trap, the “Gate of ObamaCare,” and they did it with sleight of hand and outright skullduggery.  The Republicans screamed and moaned, but alas, they were powerless to stop it.  What the Democrats did to pass ObamaCare would have made Bernie Madoff and the greatest card sharks envious.  The Dome of Utopia was complete, and inside the dome were the pig trap and the government-run pig trough, at which millions of Americans now feed.

Of course you can’t run a Dome of Utopia without laws and regulations.  To effectively control the people in the Dome, the government and the central bankers created a million more laws and regulations that are set in stone and cannot be unraveled.  They even perverted the court system that is run in favor of government.  Their foundation for these new laws was built on the collective guilt of the people, put there by the central bankers and the government.  The guilt was in response to the UN-fabricated policies of social justice and radical environmentalism.

The pig trap in the Dome of Utopia now contained all of the elements to enslave the people of an entire nation, and enslaved they were, without any knowledge of the evil deed having been committed.

Sadly, the people don’t even know they are in chains because they live under this giant Dome of Utopia, created by their silent enemy without their knowledge.  This Dome appears to them as peaceful, safe and secure because they are not aware that true freedom resides outside the Dome.  But real trouble awaits those who decide they want to change the rules under the Dome ….. to restore freedom.

Like the masses, the central bankers are using the socialists and environmentalists for their own ends.  None of them will be free until they decide to walk out of the Dome on their own into the naked light of day, no matter what the consequences.  We simply, as a nation and as a people, aren’t willing to pay the price yet.  The question is, will we ever be willing?

So you see, ladies and gentlemen, America resides in a pig trap, and the people are so fat, dumb and happy that they don’t even know that …..

“Freedom Is a Fading Mirage on a Darkening Horizon,

Under the Dome of a False Utopia.”

This is America’s shattering reality and its future, unless a million breaths, in unison, start blowing into the political wind.

Ron Ewart, a nationally known author and speaker on freedom and property rights issues and author of this weekly column, “In Defense of Rural America“, is the president of the National Association of Rural Landowners (NARLO (http://www.narlo.org/), a non-profit corporation headquartered in Washington State, an advocate and consultant for urban and rural landowners.  He can be reached for comment at mailto:info@narlo.org.

Freedom Is a Fading Mirage on a Darkening Horizon added on Sunday, June 22, 2014