Zullo has led an almost-three-year investigation into the image posted on the White House website purported to be a scan of Barack Hussein Obama’s certified long-form birth certificate from the Hawaii Department of Health.  On March 1, 2012, Zullo and Maricopa County Sheriff Joe Arpaio announced in a press conference that the image was a “computer-generated forgery,” along with Obama’s Selective Service registration form released to various FOIA requesters.

Beginning in 2007, the mainstream media refused to delve into the background of the little-known, first-term U.S. Senator from Illinois.  After declaring himself a candidate for the presidency in February 2007, none of Obama’s school, medical, college or political office records were made available to the public.  In late 2007, MSNBC commentator Chris Matthews stated on his “Hardball” show that Obama was “born in Indonesia” and possessed “a Muslim background.”

Other media refused to investigate Matthews’s statements, and Obama ascended to the presidency without having revealed any information about himself, surrounded by the aura of “hope and change.”

After mounting pressure and questions about his eligibility and identity, the White House released the image online on April 27, 2011, which was quickly declared a forgery by experts. In September 2011, Arpaio commissioned the posse to investigate it at the request of 250 constituents who were concerned that their votes in the 2012 election would be disenfranchised if Obama proved ineligible and his name appeared on the Arizona ballot.

As a result of the birth certificate investigation, Zullo learned that at least several reporters were threatened after showing interest in researching Obama’s origins, life story, or lack of documentation.

The Obama regime has myriad connections with such major media companies as ABC News, CBS, CNN, MSNBC, and NBC News.  After Obama’s first presidential election, his communications director, Anita Dunn, bragged that the campaign had “controlled the media” and therefore the message conveyed to the public.

In 2008, NPR, which had previously stated that Obama was born in Kenya, inexplicably changed its report to state that Obama’s birthplace was “Hawaii.”  Will Hoover, a reporter at The Honlulu Advertiser in 2006, also changed a report he wrote which stated that Obama had been born in Indonesia to say that his “error” was a result of a hasty internet search and that Obama was, indeed, born in Hawaii.

The two items Zullo divulged in February were:

Several weeks after Zullo made those revelations, Gallups announced that “major media” had committed to following and reporting on the findings of one or both investigations.

Arpaio had not spoken publicly on his office’s investigation until very recently.  On Friday, having been booked for an interview with Fox News’s Neil Cavuto, Arpaio was unable to appear on “Freedom Friday.”  While speaking with Cavuto, Arpaio referenced “sensitive investigations” in which “nobody was interested,” which, to those who have followed the issue, know was a reference to his criminal probe of some aspect of the Obama regime, perhaps of those who created the forgeries.  On May 10, in an interview with Chris Pareja of The Right Side, Arpaio used the same words when referring to his investigation of “the birth certificate.”  “We’re not done with that yet,” Arpaio said.  “No politician, nobody will touch this.  The media is a blackout.  I can’t believe this, and I have the evidence.  So I’m trying to find out who is behind it now.”

The only other times Arpaio has spoken publicly about the birth certificate investigation were at formal press conferences held on March 1 and July 17, 2012.  Until February, it was unknown that Arpaio’s office had assumed any investigatory duties regarding the posse’s findings.

Arpaio has other posses available to him to assist with the work of the Maricopa County Sheriff’s Office.  Posse members number as many as 3,000. 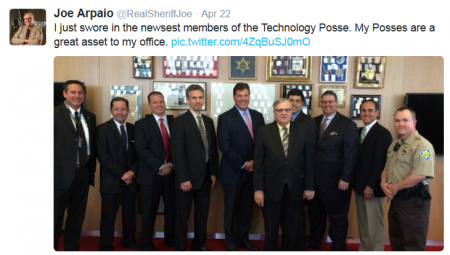 On Friday, following a period of relative quiet, Zullo revealed that Arpaio is “honing in” on the creators of the fraudulent birth certificate image.

Beginning in 2008, members of Congress sent dismissive form letters to constituents questioning Obama’s constitutional eligibility stating that Obama was born in Hawaii which was allegedly supported by two newspaper announcements of the birth at Kapiolani Medical Center on August 4, 1961. Now, following the delivery of hundreds of “Sheriff’s Kits” by WheresObamasBirthCertificate.com (WOBC) founder Mike Volin to Congress, some staffers are either silent on the matter, remain in denial, exhibit anger at the suggestion of wrongdoing, or admit to being aware of it.

Some congressmen have ventured to admit that people have questioned Obama’s birth narrative with which the Kenyan Parliament also takes issue.

A video produced for WOBC preparing the viewer for the results of Arpaio’s investigation has received some mainstream media coverage.

On Friday, Zullo said that Arpaio received new information which precluded holding the revelatory press conference in March, as was previously planned.  Gallups and Zullo also reported that the “smokescreens” and “jibber-jabber” issued by Obama supporters, called “Obots,” to mislead the Cold Case Posse actually led to a second “massive criminal investigation” which appears to have led to Arpaio’s statement about having identified the forgers.

While Zullo could not provide a date for Arpaio’s press conference, Gallups indicated that it could occur within “months” rather than “years.”  Gallups concluded the segment by saying that the “two press conferences will happen.”

Also on Friday, Atty. Larry Klayman was interviewed by progressive host Alan Colmes on Fox News Radio and given the opportunity to explain why he believes Obama is ineligible for the presidency and that his birth certificate is “fraudulent.”  Klayman expressed his understanding of the meaning of the Constitution’s Article II, Section 1, clause 5, which states that the president must be a “natural born Citizen.”

After Klayman faulted Boehner and others for sanctioning NSA spying just before the end of the six-minute segment, Colmes posited, “You’re not going to get rid of Obama.  You wanted to force Obama out of the White House prematurely, before an election, and that did not work out so well, did it, and it’s…” to which Klayman responded, “It’s a gradual process, Alan, it’s not…happens in one day.”

Colmes told Klayman that he had interviewed Col. Harry Riley on his “Operation American Spring” (OAS) initiative “last week.”  OAS began on May 16 and seeks to obtain the resignations of Obama, Biden, Reps. Nancy Pelosi and John Boehner, Eric Holder, and others seen as highly corrupt.  While Colmes’s tone was disdainful of Riley’s efforts, citizen-led movements are rarely covered by the mainstream media.

Although present in Washington, DC for at least the first day of OAS, NBC News failed to report on it.  MSNBC characterized the gathering as one which intended to “overthrow the government,” as did The Wire.

A local NBC report in Baton Rouge, LA described OAS as “a nationwide organization with more than a million members, and more than a hundred right here in Louisiana.” It headlined that OAS attendees object to “Common Core,” although protesters holding signs saying “Impeach Obama” were also shown in the photograph.

Other media characterized OAS as an attempt at “shutting down the federal government,” which Riley has never expressed, or a failure on its first day when it was intended to stretch out for an undetermined amount of time.

In August 2010, Fr. Jonathan Morris stated on “Fox & Friends” that Obama was “born in a Muslim country,” to which co-anchor Alisyn Camerota quickly responded, almost breathlessly, “Well, he was born here…” Morris then looked down almost sheepishly and said, “You’re right, I’m sorry…I’m glad you clarified that.”  A second co-anchor then said, “Another misconception.”

Both Klayman and Gallups have indicated that evidence points to a foreign birth for Obama.

Arpaio was born on Flag Day (June 14), 1932 in Springfield, MA.  After serving four years in the U.S. Army, Arpaio went to work first as a police officer, then as a federal drug enforcement officer for approximately 34 years.  In 2012, he was elected for a sixth consecutive term to the Sheriff’s Office, which employs 3,400 people.

In 1998, a website seeking to “overthrow Arpaio” was launched, and a Facebook page claims he is guilty of “corruption, waste, abuse, neglect.”

On Thursday, Arpaio announced that he would not seek the governorship of Arizona, citing ongoing “sensitive investigations.”

Is the Media Blackout on Obama’s Forged Birth Certificate Lifting? added on Sunday, May 25, 2014

2 Responses to "Is the Media Blackout on Obama’s Forged Birth Certificate Lifting?"