(May 18, 2014) — The Post & Email has learned exclusively that Mike Volin, founder of WheresObamasBirthCertificate.com (WOBC) displayed a sign in front of the White House on Sunday urging passersby to “contact Congress” in light of the forgery of Obama’s long-form birth certificate.

On April 27, 2011, an image purported to be a scan of Obama’s certified birth record from the Hawaii Department of Health was posted on the White House website but later discovered to be a “computer-generated forgery” by a criminal investigation spanning more than two years.

Volin and his group are in Washington as part of the Operation American Spring (OAS) initiative which seeks to remove Obama, Biden, Speaker of the House John Boehner, Sens. Mitch McConnell and Harry Reid, and Rep. Nancy Pelosi from office.

The Post & Email has provided reports from eyewitnesses at OAS since its opening day on Friday.

“A lot of people came up to us and said, ‘What’s that?'” Volin said.  When we asked if they had not heard of the birth certificate issue, he responded that “everybody said they’d heard something, but they weren’t knowledgeable about the depth of the investigation that the sheriff’s department did,” referring to the criminal investigation conducted by the Maricopa County, AZ Cold Case Posse beginning in September 2011.

Last year, Volin produced “Sheriff’s Kits,” which are DVDs containing a detailed presentation given by Zullo as to the posse’s conclusions of forgery of both Obama’s long-form birth certificate and Selective Service registration form.  In November, Volin and some of the same volunteers distributed the kits to more than 200 members of Congress.

Volin conducted the interview with The Post & Email while making a campfire for an evening meal.

Group member and former U.S. Marine Jeff Harrison characterized their Sunday visit to the White House as a response to Obama’s failure to reply to a letter sent by Volin in early January asking Obama to release his paper birth certificate given the forgery posted at whitehouse.gov.

“‘I came knocking at your door because you didn’t answer my mail,'” Harrison said.  “Mike sent a letter and nobody answered it.” 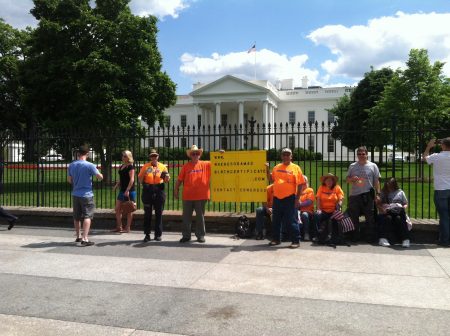 “Were there a lot of people watching you as you stood there with the sign?” we asked Harrison.

“There was one guy riding a bicycle in zigzags who was smirking and laughing.  Some people acknowledged it.  There wasn’t a really big crowd because we didn’t make a big spectacle of it,” Harrison told us.  “We were right in front of the police officer.  He had his car parked diagonally in front of us, and he was on the hood of his car writing a report.  He didn’t pay us any notice at all.”

Harrison said that in back of the police officer was “an irritator with two blowhorns” who was “talking all kinds of mental stuff.”

Volin reported that approximately 20 Sheriff’s Kits were handed out to passersby “right in front of the White House.”  “We went there because we wanted to take pictures, but it was a little protest.  People were asking questions, and we gave them kits.  As Jeff said, ‘Obama didn’t answer my letter,'” Volin said.

“A lot of pictures were taken of the banner,” Volin added.

The group has plans for Monday which will be announced then. 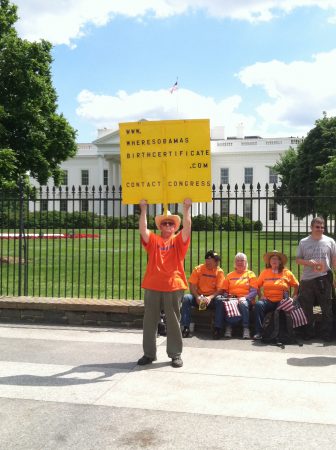 Volin hosts a radio show and has been a guest on several mainstream radio shows in recent months.