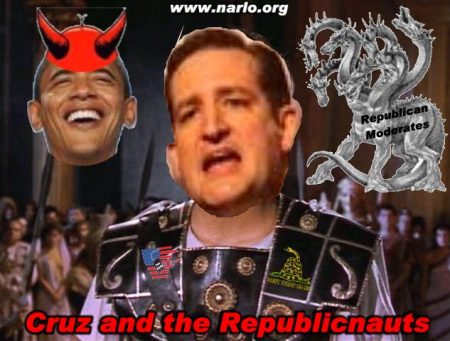 (Oct. 20, 2013) — “The political machine triumphs because it is a united minority acting against a divided majority.” — Will Durant

“The political machine triumphs because it is a united minority with big guns, acting against a divided majority with small guns, but rudderless.” — Ron Ewart

Arrogant, dictatorial and lawless is our anointed King Obama, who is adored by millions of mindless groupies that grovel at his feet for a piece of “Obama’s stash” and his benevolent generosity, using other people’s money that is confiscated from taxpayers at the point of a gun.  On the whole, it wouldn’t make any difference if the groupies (freeloaders) couldn’t vote.

Since the 2010 mid-term election, when the Republicans took back the U.S. House, King Obama has thumbed his nose and viciously berated the Republican members of Congress, especially the Tea Party conservatives.  He issues illegal Executive Orders to bypass the mandate of Article I, Section 1 of the U.S. Constitution.  He issues directives to the secretaries of his cabinet to promulgate rules and regulations that “fit” his ultra-liberal agenda (think socialism), that circumvent our representative form of government and totally ignores the Separation of Powers doctrine.  With no constitutional authority whatsoever, he sends out edicts to change a law 17 times that was duly passed by Congress, signed by him and inconceivably upheld by the U.S. Supreme Court (Obama Care).  His edicts are designed to reward his friends and punish his enemies ….. an enemy list that is growing by the day.  But alas, no one is challenging King Obama’s growing power except …..

The only power that stands in King Obama’s way is the U.S. House of Representatives, heavily influenced by the Tea Party Republicans ….. “Senator Ted Cruz and the House Republicnauts” (from Jason and the Argonauts), who are finally showing some determination to roll back, or at least hold at bay, the dreadnaught battleship of liberal socialism that is savagely consuming a once-great and exceptional America.  If it wasn’t for the Tea Party and the Republicnaut candidates they supported and funded who are helping to turn the balance of power in the U.S. House of Representatives to the principles of freedom and liberty and willing to stand firm on those principles, Obama would be getting his way with no holds barred.  With the trashing of the Republican Party for allegedly causing the government shutdown, he may still eventually get his way.

King Obama got his way with a Democrat-controlled House and Senate in his first two years of his first term, and look what it got us.  It got us an $800 Billion stimulus package that didn’t stimulate but was in fact the largest pork-barrel spending scheme in the history of the United States Government that contained over 9,000 individual funding “earmark” allocations for Obama’s friends, mostly unions.  Those first two years of King Obama gave us Obama Care, the biggest Ponzi and wealth redistribution scheme ever devised by man that eclipses Bernie Madoff’s criminal enterprise by 3-digit magnitudes.  (It was just reported that the Obama Care website is down and might be down for months.  Will anyone be fired?  Probably not!)

It got us the Dodd-Frank law that wraps chains around the financial industry. drives up the cost and rations the availability of financing to unprecedented levels.   Small businesses find themselves locked out of needed credit to expand their business or hire new employees.  The uncertainty, complexity and extraordinary costs of Obama Care and 20,000 pages of rules and regulations have exacerbated the situation.  This uncertainty, caused by Obama and the Democrats, has stalled, if not seriously inhibited, any reasonable recovery of the economy.  The results of a stagnated recovery are manifested in millions of lost jobs, all at the hands of Obama and the Democrats.

Obama’s overt actions to limit vitally-needed energy production or failure to approve energy projects has only worsened our economic situation and added to lost jobs.  His obsession with inefficient wind and solar energy for fatally flawed scientific theories, such as man-caused global warming, can only be construed as naive at best, or criminally premeditated at worst.

King Obama’s foreign policies of appeasement and negotiations without conditions are the laughingstock of the world.  His bungling and fumbling of the Syrian conflict was in-your-face blatant evidence of a leader who quivers and hesitates when hesitation is an invitation to disastrous consequences.  If it wasn’t for an accidental, off-the-cuff remark by Secretary of State John Kerry that was exploited by Russia’s Putin and Syria’s Al-Assad, the whole Syrian fiasco could have blown up in Obama’s face and ignited a world war.  That is how serious indecision can be.

But even worse, King Obama has polarized the country so badly that the division between Americans threatens to destabilize our culture and our economy.  The truth is, Obama loves a divided America, as it takes the heat off of him and the Democrats.

All these actions we have described above are laid at the feet of the Democrat Party and that portion of the groupie electorate that elects Democrats, all standing in line with their hands outstretched for any “free” bone the Democrats will throw at them.  That a portion of the American electorate has sunk so low is not only tragic, it is disgusting.

But some clear-thinking Americans erected a nagging roadblock to King Obama.  They elected more Republicans than Democrats to the U.S. House of Representatives in 2010.  Some of those new Republicans lit a fire under the soft belly of the moderates in the Republican Party and the moderates are none too happy about these whippersnappers upsetting their cushy apple cart and their behind-the-scenes, closed-door capitulation to the political power of the Democrats.  To the delirious delight of millions of freedom-loving Americans, these principled whippersnappers have exposed the yellow streak down the back of the moderate Republicans, such as John McCain and Lindsey Graham and their backroom deals with Democrats.

However, King Obama is having none of this usurpation of his supreme power by a bunch of low-life, gun-toting, Bible-thumping conservatives who have injected themselves into the smooth-running Chicago machine of his corrupt Kingdom.  Obama’s noble robes are being thrown about in temper tantrums and his crown hurled across the room in the direction of these pesky interlopers in a reenactment of an immature boy king.

Edicts and warnings of dire predictions of permanent calamity if the Tea Party conservatives have their way flow out of his lying mouth in a never-ending cascade of boring speeches.  Words like “not only NO and NO WAY will I negotiate with these miscreants,” are uttered almost every day.  King Obama is beginning to crack and his arrogance and narcissism are being magnified by his unthinking, belligerent outbursts.  Could he be approaching the blind insanity of the Roman Emperor Caligula?

The Tea Party Republicnauts are finally getting Obama’s goat, but like his Syrian debacle, Putin will not be there to come to his rescue.  Rather than coming to terms with the House Republicans, King Obama has hurled invectives at his perceived enemy and would have willingly sent America into financial default and risk a serious downgrade of the full faith and credit of the American government, with international consequences, in a grand slam of CYA by an inept, criminally negligent and evil con man that is the warped persona of King Obama.

“In conventional terms, it seems inexplicable, but Senator Cruz and his adherents do not view things in conventional terms. They look back over the past half-century, including the supposedly golden era of Ronald Reagan, and see the uninterrupted forward march of the American left.  Entitlement spending never stopped growing.  The regulatory state continued to expand.  The national debt grew and grew and finally in the Obama years, exploded.  They see an American population becoming unrecognizable from the free and self-reliant people they thought they knew.  And they see the Republican Party as having utterly failed to stop the drift toward an unfree nation supervised by an overweening and bloated bureaucracy.  They are not interested in Republican policies that merely slow the growth of this leviathan.  They want to stop it and reverse it.  And they want to show their supporters they’ll try anything to bring that about.  And if some of those things turn out to be reckless and doomed, well so be it.”

Ladies and gentlemen, if it weren’t for Ted Cruz and the House Republicnauts, King Obama would have been successful in sending America into the snake pit of his vision of a socialist utopia that history has proven will fail every time it is tried.  God bless a divided government and God bless those brave souls who will stand up against the onslaught of a socialist mindset, a mindset that has infected every American institution and every level of society with a fatal disease, including the government that sponsors and reinforces that disease.  The disease is epitomized by the recent run by SNAP card (food stamp) holders at a Walmart store to fill their carts to the brim at a cost that went way beyond the SNAP card limits, due to a computer malfunction.  Way too many Americans are now devoid of honor because they have been infected with socialism, that get-something-for-nothing disease ….. in exchange for their votes.

Finally, some brave Americans who happen to be a few of our representatives have the courage to stand up against the party elites as well as challenge King Obama and the distorted vision he and the Democrats have of an America that has survived great trials and tribulations but may not withstand the pure evil of a snake oil salesman whose total claim to fame was being a community organizer.  May the undaunted courage of Senator Ted Cruz and the House Republicnauts infect each and every American who stands for and is committed to the preservation, protection and defense of our Constitution and the Republic that spawned the birth of true individual freedom, the treasured gift from our Creator.

Like Ted Cruz and the Republicnauts, we do not fear the government as most Americans do.  We don’t cower in a corner when confronted by their arrogance, abuse and corruption.  We fight back.  Follow our current fight with the IRS HERE, including our Criminal Complaint filed with the FBI.  We’ve beat them twice and we’re working on the third win.  Will you fight, or will you cower in a corner when the government comes knocking on YOUR door?

Ron Ewart, a nationally known author and speaker on freedom and property issues and author of his weekly column, “In Defense of Rural America,” is the President of the National Association of Rural Landowners, (NARLO)  (http://www.narlo.org) a non-profit corporation headquartered in Washington State and dedicated to restoring, maintaining and defending property rights for urban and rural landowners.  Mr. Ewart is now engaged in a plan to expose the Internal Revenue Service with his website (http://www.attackwatchspies.com) and with his monthly newsletter, “The IRS Investigator.”  He can be reached for comment at ron@narlo.org, or by phone at 1 800 682-7848.

Ted Cruz and The Republicnauts added on Sunday, October 20, 2013

2 Responses to "Ted Cruz and The Republicnauts"