“WE HAVE SUSTAINED MUCH DAMAGE” 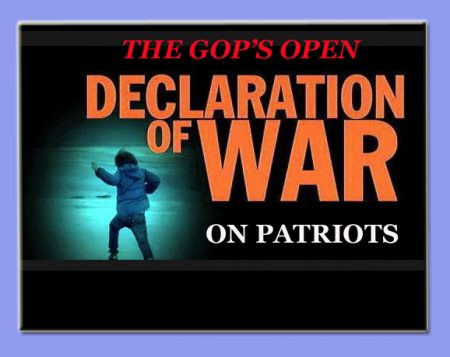 (Oct. 18, 2013) — For several years now TPATH, as well as others, have written about the GOP establishment’s behind the scenes, not so stealth attacks on not just the Tea Party and Conservative movements but individual leaders of those various organizations.

This past week, as well as several weeks earlier, the battle for the Republican Party has come front and center as the weasels have shed their costumes of Patriot clothing and donned the garb of General Benedict Arnold. They have declared open warfare on conservatives and constitutionalists. The purge which has been going on since the beginning of the grassroots movement, has now been taken front and center.

This new found courage has risen from their collusion with the leftists, communists and the criminal mainstream media.  They believe the American people have been defeated and now it’s time to destroy the last vestiges of resistance, starting with Ted Cruz, Mike Lee and any elected official with grassroots ties.

A Little bit of recent history:
Many establishment RINO’s would show up at meetings and even Tea Party rallies.  They would come begging for votes just prior to election day.  All the while working to destroy the conservative movement at every opportunity. They supported and still do, so called Conservative Blogs and web sites which had one objective and one objective only.  To derail any and all opposition from the grass roots movement.

The dirty little secret is that there really is very little difference between the Democratic Party and those who run the GOP establishment.  There really never has been.  Those in comfortable positions of power and authority in the Republican Party are like happy little piglets slopping around the barnyard swill, joyfully licking up scraps doled out to them by the Democrats and the news media.

All they needed to do was, in public, put on a modicum of resistance to the progressives, while privately licking the mud crusted boots of the left.  This went along swimmingly well over the decades as finishing second in a two pig race was just fine.  After all only the public perception of ideology conflict had importance.  The Democrats threw the GOP a slippery bone every once in awhile as both parties slipped it to the American people, all the while.  Oh, life was just wonderful there in the slop pit of politics.

Then came the Constitutionalists, the true conservatives, the Tea Party movement.
How dare they interfere?
How dare they?

As stated before, this war is nothing new. Recall how every Tea Party candidate who won a Republican Primary over an establishment RINO was mercilessly trashed, demeaned and categorized as crack pots, witches or women haters.  Rove, the King RINO, showed just how little the GOP cared about winning US Senate seats, if those seats were not being contested by one of their “follow our orders” guys.

THE WAR HAS BEEN DECLARED- LET’S JOIN THE BATTLE
The GOP has proven they will not support nor help a Conservative win a general election.  Of this there is ample proof and history.  It is time true Americans, those who now see the complicity and collusion between the GOP RINO’s and the progressive left, hand the Republican establishment a little bit of their own medicine.

For a while TPATH had flirted with the need for a third party, understanding that it would be decades, if ever for one to become viable. The mindset was that no matter which of the two parties won elections, the progressives still would be in power.  So the thought was we have nothing to lose, so let’s get started.   This idea was valid, but it’s time to take it to a different level.

It is time to take it to the Republican establishment, the way they have been taking it to us, the true Americans.  Not by starting or supporting a third party.  But by not supporting RINO’s, anytime or anywhere.

The Tea Party movement has been fighting the left on the open front and the progressives from behind our lines.  The Tea Party has looked for and supported constitutional candidates and “primaried” those with voting records which have proven to be detrimental to America.  Where we failed to win a primary, it had always been our objective to then vote for the RINO over the Democrat.  It’s clear, that must stop and it must stop, now!

Allowing the GOP to trash conservative candidates, not support them and even work against them and having the Tea Party support their candidates in the general elections is tantamount to entering an axe fight without an axe.  We have lost arms, legs and sustained much damage.  It is now time to return the favor.  Sharpen our axes and bring them to the party.  So to speak.

Below is a list of steps the constitution and conservative movement needs to take.
But first some thoughts on the effect on our economy, our lives and our country they would have, in the short term, if this plan is implemented.  Since the only difference between GOP, people such as McCain, Graham, King and Christie and the Democrats is how they spell their names, the answer to that question is….not a blessed thing.

STEPS TO TAKE TO JOIN THE DECLARED WAR:

Remember, it was the GOP that declared this war.  We have reluctantly accepted but will vigorously engage.  Even if this war helps Democrats get elected each of us must ask ourselves, in the words of a great un-American progressive, What difference does it make?

TPATH will not support or vote for Governor Chris Christie. Here’s why.

And for those who claim he has kept property taxes from rising, check your last statement.

As of now, I’m not sure which Gubernatorial Candidate I will be voting for in November.  But I do know which one I will not be voting for.  Before voting for anyone, each of you should ask yourself, which of the things listed above would be better or would not have happened if a Democrat had been Governor?
The answer, not a one.

Kenneth Kaplan of the Libertarian Party is on my radar screen.  I’m still checking, but it’s looking like he will get my vote.

THE WAR HAS BEEN DECLARED, THIS NOVEMBER WILL YOU BE ENGAGING

RINO’S Declare War on Conservatives and the Tea Party added on Friday, October 18, 2013