Saving America – One City, County and State At A Time 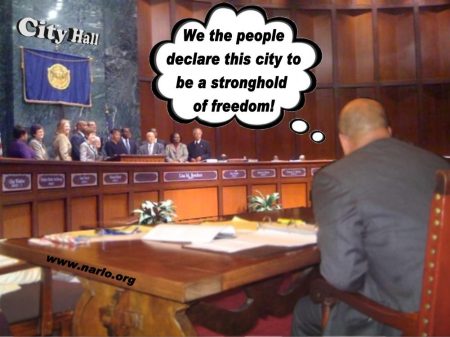 From Virginia going liberal in 2012, to New York and Pennsylvania and finally to the seven remaining 13 colonies in the Northeast that started America’s march towards freedom, America’s states and counties are turning blue.  Actually, America is turning red, the color of socialism and communism.  Large urban centers around the great bodies of water from the Atlantic to the Great Lakes to the Caribbean and on to the Pacific Ocean are driving the Electoral College into the jaws of liberalism and Progressivism with growing urban populations that are dependent on government.  From government itself to academia and to those who make (not report) the news, liberalism has taken over America one school board, one city, one county and one state at a time.  Liberals now OWN most city, county and state governments and the federal government.

Many conservative authors, including this one, are quick to tell their audience, with article after article, about all the things that are wrong with America but are short on solutions to make the wrongs right.  We, in our weekly column, often have written that it will take 10 million Americans acting in unity to reclaim American freedom.  But there is a significant problem with getting 10 people to find unity in anything, much less 10 million.   In response to one of our articles claiming the need for 10 million Americans to act in unity, one of our readers wrote:

“EXACTLY WHAT WOULD YOU HAVE US DO?”

“….. I have been involved right up to my neck in the resistance to this tyranny in every legal way that I could possibly think of.  All of it to no avail.  I believe that a vast number of our fellow citizens are critical thinkers with reasonable intelligence.  We, meaning all of us, have always stood ready to do ‘something.   Taking into account all that has been said and done to this point by a multitude of individuals and groups, I also suspect that most of us have a good idea what that ‘something’ is.  Even so, what none of us are willing to do is fall on our sword in the name of saving something which, individually, we are powerless to save.  So, I must say this.  Give me the plan of action you have in mind and muster the army of patriots it will take to implement it and you can count me in.  Until then, please stop worrying me to death with the ever growing list of tyrannies those of us in the liberty movement have been actively and relentlessly resisting for the past twenty years.  You are not alone in this.  You never have been.  But, nobody in his right mind is going to act independently in the name of righteousness and have his life ruined just to make a point, while everyone else blithely goes on about his or her business.”

“So, how about this?  Drum me up an army of people who give a damn and I’ll lead it.”

This reader’s response is dripping with not only a boatload of frustration, but also a significant measure of sarcasm.  Who, ladies and gentlemen, can blame him?   We have all felt this frustration, almost daily.  This author thinks regularly about throwing in the towel and has come very close on many occasions, especially after creating many different initiatives to reclaim America’s freedom, only to be greeted by mostly a resounding silence.

Nevertheless, the reader’s reaction demands a response.  Perhaps there is a more realistic approach that doesn’t take 1 million, or 10 million people.  Obviously, it is much more realistic to get 10 dedicated people in each city to take on their city than it is to get even one million people to take on the federal government.  After all, the prevailing wisdom is that all politics is local.  So far, all the conservative TV and radio talk show hosts and conservative politicians have been ineffective in turning the tide of socialism in America.

One dedicated and hopefully charismatic leader, acting as the head of a national organization, could appoint one leader for each state to start the ball rolling.  His or her appointments would come from a large list of volunteers who would come out of the woodwork to volunteer if they knew such an organization existed.  He or she would give speeches all over America with the idea of raising the money and enlisting the volunteers.  Each state leader could then appoint one dedicated leader for each county in the state and in addition, appoint nine other individuals to take on the state.  Each county leader would appoint nine other individuals to cover their county.  Each county leader would then appoint one city leader for each city in the county.  Each city leader would then appoint nine other individuals to cover their city and on and on it would grow from there in true grassroots fashion.

Each leader, state, county and city, would have a fully-defined and coordinated game plan on how to influence his or her state, county, or city to move it in the direction of the Constitution and freedom.  The game plan would first be to target and expose waste, fraud, abuse, crime and corruption in their city, county, or state, with the sole purpose of getting the general population up in arms.  There is plenty of waste, fraud, abuse and corruption in government to expose, as these maladies have been institutionalized in government over the last 100 years.  After a couple of years of exposing government for what it is and arousing the ire of the general population, the organization would start discrediting existing politicians with corruption and dereliction of duty charges and then begin to focus on selecting candidates to run for political office to take advantage of the growing dissatisfaction of government in general.

Finally, there would have to be a national newsletter that would be the venue to publicize everything that the 10 dedicated individuals for each city, county and state uncover.  That newsletter would be fed to every news outlet in America, using every social network available.

The key to the success of this organization would be to get the general population up in arms over what has happened to their country by focusing on waste, fraud, abuse, crime and corruption that has been institutionalized in all government and then provide an alternative.  Their collective anger would begin to move the country back to its roots in freedom and liberty, maybe ….. that is, if we aren’t too far gone already.

Sure, it can be done, but who would lead such an organization?  Where would the first monies come from?  And are there 232,000 dedicated individuals out of 315,000,000 Americans that would have the time and the resources to conduct the necessary functions of the organizations in every city, county and state in America?  If we had to base our answer on the number of people who have been interested in the initiatives we have floated over the last ten years, the answer would be “NO ONE” to all of these questions.  However, if a Rush Limbaugh or a Sean Hannity started such an organization it might have a chance.  But neither of these individuals has shown any signs of doing any such thing in their entire careers.

We could lead such an organization and give the speeches, if there was anyone to lead and if there was sufficient early funding.  We have structured the plan, the name, the goals and the end game but there is no money for such an effort.

So who will save American freedom?    Who will expose the wholesale waste, fraud, abuse, crime and corruption that we all know exists in government, local, state and federal, in order to raise sufficient anger in the people to move them to act?  Who will create the small but growing “Strongholds of Freedom” around the country?  Who will raise the money to fund such an organization?  Has government grown so big that it is now all-powerful and has rendered WE THE PEOPLE impotent?  We must confess, ladies and gentlemen, we don’t have a clue.  America is befuddled by the five debilitating diseases of division, disorganization, apathy, fear and greed.  Until we find a cure for these diseases, America’s future in freedom is in serious jeopardy.

Ron Ewart, a nationally known author and speaker on freedom and property issues and author of his weekly column, “In Defense of Rural America“, is the President of the National Association of Rural Landowners, (NARLO) (http://www.narlo.org) a non-profit corporation headquartered in Washington State and dedicated to restoring, maintaining and defending property rights for urban and rural landowners.  Mr. Ewart can be reached for comment at ron@www.narlo.org or by ‘phone at 1-800 682-7848.

One Response to "Saving America – One City, County and State At A Time"