(Jun. 17, 2013) — On Monday, morning, The Post & Email logged in to Twitter and noticed a tweet apparently posted by White House Communications Director Dan Pfeiffer, who has vouched for the birth certificate image posted on the White House website but has been declared a forgery by experienced investigators. 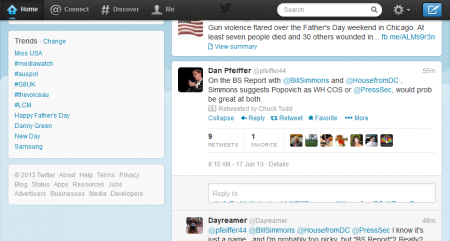 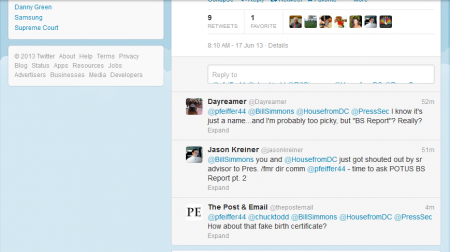 The Maricopa County, AZ Cold Case Posse began an investigation in September 2011 with the purpose of “clearing the president” of any and all allegations that the image posted the preceding April was a forgery, as numerous graphics experts had said immediately after its publication.

Rather than dispelling doubt, however, the investigators found that the image was fraught with problems.  Lead investigator Mike Zullo made two presentations at the Constitutional Sheriffs and Peace Officers’ Association meeting in St. Charles, MO on May 31 and June 1, respectively, with at least one congressman in attendance.  Zullo and Maricopa County Sheriff Joe Arpaio have sought a congressional investigation since their last joint press conference on July 17, 2012, during which they stated that their finding of forgery had surpassed the standard of “probable cause.”

Pfeiffer accused Republicans of having “doctored” emails about the Benghazi, Libya attack which killed four Americans last September 11 but continues to support a “computer-generated forgery” created by at least one federal felony.  Pfeiffer also accused columnist Charles Krauthammer of “lying” about the removal from the White House of a bust of Sir Winston Churchill last summer.

Mark Knoller of CBS News, who is traveling with Obama to Northern Ireland and Germany this week, tweeted on Sunday night:

According to Zullo, no history is available on Obama, and there is no proof that his parents are those he has claimed for his life story.

In keeping with other mainstream “reporters,” Knoller refuses to acknowledge the findings of the Cold Case Posse regarding Obama’s documentation, which includes his purported Selective Service registration card.  To date, no corporate media has reported on television that Obama’s identity is in doubt.

Will Dan Pfeiffer Respond About the Forgery? added on Monday, June 17, 2013

One Response to "Will Dan Pfeiffer Respond About the Forgery?"