WHERE IS THE “READOUT?”

(Sep. 11, 2012) — The Israeli press and Reuters have reported that Obama refused a request from Netanyahu to meet in person while Netanyahu visits New York for a United Nations General Assembly meeting which begins on September 18.

Chuck Todd of NBC News has tweeted that a “readout” of a telephone call which allegedly took place between Barack Obama and Israeli Prime Minister Benjamin Netanhahu earlier this evening. Todd’s tweet reads:  WH releases readout of Obama-Bibi call. Says never a request for meeting while both were in NYC meaning there was no snub #latenightcleanup?” 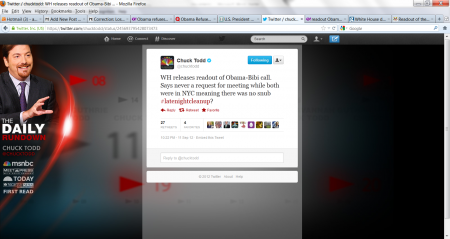 However, no such “readout” appears to be available for September 11, 2012 between Obama and Netanyahu as of press time at 10:20 p.m EDT.  The alleged telephone conversation is said to have affirmed that “that they are united in their determination to prevent Iran from obtaining a nuclear weapon, and agreed to continue their close consultations going forward.”  But where is the “White House statement?”

On September 8, it was reported that Netanyahu was expected to meet with Obama in Washington “for an additional meeting.”  The DEBKA File reported that the White House had requested a meeting with the Israeli Prime Minister “on the sidelines of the next UN General Assembly session opening in New York on Sept. 18.”

It has been reported that Netanyahu today “warned the White House that it had no moral right to block an Israeli attack on Iran‘s nuclear facilities.”  It was reported on September 5 that the U.S. would not assist Israel if Iran attacks it.  Earlier today, Secretary of State Hillary Clinton had said on Bloomberg Radio that the U.S. “would not set deadlines” for Iran to compel it to stop its uranium enrichment activities.

Chairman of the Joint Chiefs of Staff Gen. Martin Dempsey “told reporters in Great Britain on Aug. 30 that an Israeli strike would be ineffective” and voiced an unwillingness on the part of the U.S. to participate if one occurred.

UPI is reporting that a telephone conversation took place Tuesday evening and quotes from an alleged “readout” of the discussion which allegedly includes the statement, “Contrary to reports in the press, there was never a request for Prime Minister Netanyahu to meet with President Obama in Washington, nor was a request for a meeting ever denied.”

Last month, Netanyahu warned the world that “Iran will use the bomb if they go nuclear.”

Sources close to Obama admit that the dialogue on Iran with Israeli leaders has run its course since neither side believes it can change its opposite number’s mind. This communications cutoff is hurting the president’s campaign for reelection.

One report stated that the White House had responded to Netanyahu’s alleged request that Obama was “too busy” to accommodate him.  During the Democratic National Convention, it was revealed that Democrat Party leaders had removed all references to “God” and Jerusalem as being the capital of Israel, after which chairman Antonio Villaraigosa took three votes of the delegates to declare that the two omitted items would be restored to the platform.  It was reported that Obama “intervened,” even though prior to the omissions becoming public, it had been reported that Obama had known about the platform with the omissions.

In March, Obama had said that “the U.S. will always have Israel’s back.”