IS OBAMA DOING A GOOD JOB? 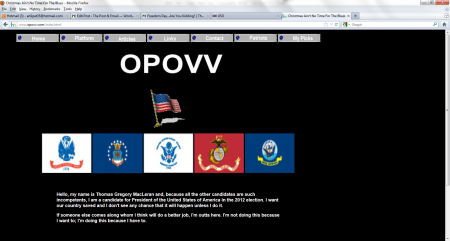 (Aug. 15, 2012) — How ‘bout those “undecideds?” Ever met one? Me neither, yet in every poll, there are ALWAYS a few who either didn’t hear or didn’t understand the question.

Here’s an example: If you were stranded on a desert island, would you want a 150’ luxury yacht to rescue you? Or: Would you want free oil changes for life, or free gas? Maybe: Since Obama took office, the price of a gallon of gas has more than doubled, the economy is down the drain, as is the dollar on the world market, unemployment continues to rise, and the military is weakened.  So do you believe that Obama has done a really good job, not so good, or are you “undecided?”

I don’t trust polls, especially if they don’t agree with me. I mean, some of these “undecideds” are as much as 20%, sometimes more. Me? I’ve never been undecided. Maybe I’ll want my cheeseburger with potato salad instead of fries, but, one way or another, they’ll know which. “Yes, I’ll have the burger with cheddar and give me the undecided with it, if that’s humanly possible, please.”  In the real world, I don’t think there are any “undecideds.”

My solution? Simple: I conducted my own poll, and there was no “undecided” choice.

Q. Do you think Obama is doing a good job as president?

A. I’m so glad I asked myself that question, and the first one, too. First, allow me to point out the difference between “think” and “know.” “Think” is like, “I think my house burned down,” and “know” is “My house burned down, went up in smoke, and there’s nothing left. There’s no thinking about it.” So, if I don’t mind, I’ll change the question to “Do you know that Obama is a complete and utter failure as the sleazy bum de facto usurper who masquerades as the president?” Well, now that I think about it, yes, I’d have to say that I’d like to see him spend the rest of his sorry life locked up in a cell down in Gitmo, along with most of the other worthless government employees.

Q. Do you have an opinion about gays in the military?

A. Look, we’re talking about the United States Armed Forces here, and not some group of “feely-nice, can’t-we-all-just-get-along” group of “do-gooders.” When I wore the uniform, believe me, there was not an ounce of “political correctness” in my being, and, to tell the truth, I honestly can say that I’ve done my level best to remain “political correctness”-free. Next question.

A. That’s true, that’s what did it for me and television news in general. If I want the truth, the whole truth, the internet is the only way to go. The best example would be The Post & Email’s relentless exposure of the rampant corruption in the State of Tennessee. Same with learning the truth about Islam. On the internet you can learn what’s really happening. That’s how I saw Geert Wilder’s movie “FITNA,” and I learned about it from “ATLAS SHRUGS” and “JIHAD WATCH.”  So there are all kinds of sites to get the truth, and not “SPIN” from O’Reilly and the mainstream media.

So there you have it, a poll we can trust, and you can do the same. Use the same questions, or add your own. The only rule is, when answering, you must keep the future generations of Americans, legal Americans, in mind.  Don’t think about yourself but rather, the good of the country. And, remember, there are “no undecideds.”

One Response to "Finally, a Poll We Can Trust"