AND DESPAIR TO JOY?

(Mar. 23, 2012) — [Editor’s Note:  This article is a continuation of a letter received from Tennessee inmate Todd J. Sweet wherein he details how he attempted to make restitution to the victims of his crimes, which the Pre-Sentence Report issued by Monroe County fails to reflect.  Sweet also included excerpts from two letters he received, both of which are from readers of The Post & Email who have read his articles published here.

Sweet has described the crimes he has witnessed in Monroe County, TN, where he and Walter Fitzpatrick met while in the jail.   Having openly admitted that he himself “chose to be a criminal” in the past, Sweet has attested that his conversion while in jail and strong belief in God and Jesus Christ as his Savior have changed his life permanently.]

God cant [sic] resurrect someone or some place (anything) that hasnt [sic] died.  That hasnt [sic] surpassed their or its own understanding and willingness to admit its [sic] at rock bottom.  Psalm 51;17.  Monroe County and others are about to begin their resurrection.

For they are at the bottom of the pit.  And my prayers are on them.

So to the ones whom [sic] spit on the laws they are sworn to uphold….

Good luck at holding on to your worldly corrupt hearts and practices.

God bless you all.

The remainder of the letter reads:

I think that says alot [sic].

Now to address one more letter before I go.

…Mr. Sweet, my father was sitting in his den the other night.  Crying.  I went in and he was stareing [sic] at his computer.  He just got done reading your article about the pen that never ran out.  [Editor’s Note:  The “pen” article is here.]

So I read it and asked why he was crying.  He said through sobs (and my dad doesnt [sic] cry) that he feels the way he treated you in grade school and middle school may have led you to prison.  He then said, if God is useing [sic] this man like he is now, than [sic] Im [sic] in trouble baby [sic].  God is going to bring alot [sic] on me.

Mr. Sweet, or Todd if I may?, [sic] my daddy is a good man and he is really sorry for whatever you two went through.  You know kids can be mean at times.  I dont [sic] know why we are, maybe we all just need attention.  Anyway.  God wont [sic] hurt my dad will he?…[sic]

I have now had several opportunities to write this child and her dad.

Both recently began a Bible based [sic] worship service at a good church.  They study together for they lost their wife/mom and son/brother in a car wreck 4 years ago.

Long ago God allowed things to happen so that me being right where I am, and this man being at his desk reading the article would come to be.

then God useing [sic] me to lead him and his daughter to salvation.

Everything is exactly as its [sic] supposed to be.

And no one is to blame for me being in prison.  No one.

All things happen (or work) for the good for those who love God and are called according to his purposes.

Romans 8 says it all.

All things.  Not just the good, but the bad also work for the good.

All things.  Any idea what I or all involved went through in order to put me and the Post & Email [sic] together?  Whew!

Please remember that the next time you feel joy at all.  That joy wouldnt [sic] be there at that moment had that person not hurt you or made you mad or whatever the case may be.

So forgive them.  Truly forgive them.  Maybe some thing happen [sic] to you when you were young.  But then years later you had the joy at a certain moment of having your own child and witnessed the birth of one for your self [sic] and were filled with joy.

Well, had not each and every thing [sic] happen [sic] to you up to that second first as it had, you wouldnt [sic] be there @ that moment to collect that joy.

The timing would be off due to a different path.  Do ya follow?

So this daughter and her daddy no longer hate God for taking their loved ones either.

They say that it was meant to be and that there [sic] joy now is proof of that.

Before, they weren’t [sic] going to Heaven to meet their loved ones who died while on their way to church.

But now they are.  They are saved, by Gods [sic] grace.  All things [sic] people, all things happen for the good.

[Editor’s Note:  Sweet sent us the cover page and pages 5 and 11 of a document entitled “Investigation Report.”  The “Type of Report” is stated as “Pre-Sentence Report.” 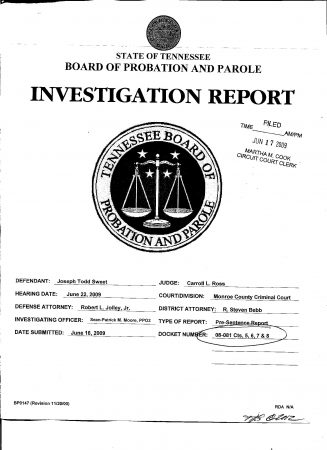 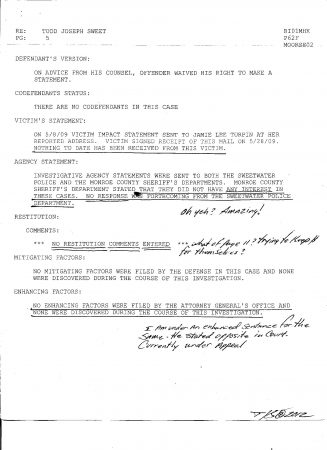 Page 5 of Pre-Sentence Report issued by Monroe County, TN in regard to Todd Sweet 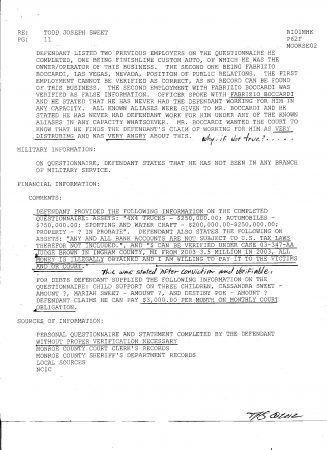 Enlarged text of page 5 of report

Middle section of page 5 which states, “NO RESTITUTION COMMENTS ENTERED,” with which Sweet disagrees

Bottom section of page 5 of report

Middle portion of page 11 detailing Sweet’s assets at the time preceding sentencing and a statement which reads, “All money is illegally obtained and I am willing to pay it to the victims and or court.”