(Feb. 16, 2012) — The Post & Email has learned that Todd Sweet, who became acquainted with Walter Francis Fitzpatrick, III while both were inmates at the Monroe County jail, has recently been moved to another facility, the South Central Correctional Center (SCCC) in Clifton, TN.

Sweet was formerly housed at the Morgan County Correctional Complex (MCCC) in Morgan City, TN.  No reason for the relocation was given.

The artwork at right arrived in a recent letter which stated, “Yes, I can draw as well.  This card is the first I ever did with a lamb.  My mother use [sic] to draw a lot and is very good at it.”

Fitzpatrick has told The Post & Email that Sweet has an abundance of information about Monroe County, including what they both claim is a corrupt judiciary and grand jury.  Sweet has written that he wishes to make amends for the crimes he has committed and details his plans to do so in a letter which will be published subsequently.

We are in receipt of numerous communications from Sweet which detail his experiences in both county and state correctional institutions.  In a currently unpublished letter, Sweet wrote that he had “broken the laws of three states.”   His latest letter relates that we can “look forward to a lengthy article about CCA (Corrections Corporation of America),” a private company which operates many state and federal prisons throughout the country.

Sweet’s latest letter advising us of the move reads, in part:

Hello.  I am been [sic] transfered [sic] to South Central corrections Complex.

An absolute war zone.  It is a CCA (private run prison) and though I am a minimum custody inmate they run all of us in together.  Minimum-medium-maximums.

There is no mirror in my room or most of the rooms because they were metal mirrors and inmates have now tore [sic] them down to make knives out of them.

At this point I am torn at what to do.  I know there are men here that need Christ in their life and need my prayers.

At the same time Id [sic] like to refuse to house.  If I do that, I get a write up and lose good time and my points go up.

I will pray about it.  Me myself havent [sic] any fear about this place but know that if the clan of old money in Monroe County want to harm me – this is a perfect place to do so.

Situation awareness tells me to leave at all costs.

So, I will pray and I ask that you do as well…

Sweet’s letter is dated February 4, 2012, and a disciplinary report dated February 6, 2012 referencing an incident from the day before was enclosed with the letter. 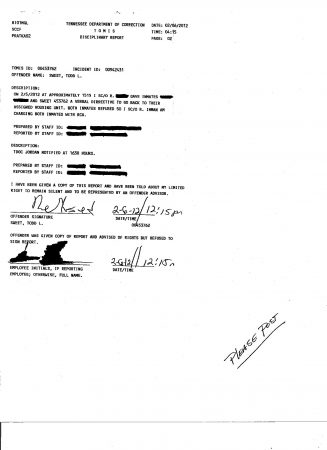 Also enclosed were several pages from the CCA “2011 Inmate Handbook” for the South Central Correctional Center.

Sweet provided his new mailing address for those wishing to write: