“THIS IS THE REASON JUDICIAL REFORM IS NECESSARY”

(Jan. 17,. 2012) — On January 12, 2012, Mr. Nicholas Purpura, co-plaintiff in Purpura v. Sebelius, which challenges the constitutionality of the health care bill signed by Obama in March 2010, was notified by letter that his petition for a Writ of Certioriari at the U.S. Supreme Court was denied.  No reason was given.

The letter was signed by Clerk William K. Suter.

The case was originally filed in New Jersey and dismissed for lack of standing by the U.S. Circuit Court judge, then made its way to the Third Circuit Court of Appeals, where it was denied a hearing.  The plaintiffs have alleged that two judges at the Third Circuit acted improperly by failing to recuse themselves, having been appointed by Obama. The lawsuit includes a challenge to Obama’s constitutional eligibility to serve as president and cites 19 alleged constitutional violations.

Laster and Purpura consider their health care challenge to be unique among the several cases which were filed against the PPACA and have termed it “We the People’s” case.  There are approximately 600 other plaintiffs who have signed on to the lawsuit.  An index of all of the motions and actions in the case is here.

The defendants had claimed “lack of jurisdiction” exactly one year ago.

In June 2011, the U.S. Supreme Court had ruled that “a court has no ‘prudential’ license to decline to consider whether the statute under which the defendant has been charged lacks constitutional application to her conduct” (page 2, end).

Purpura has written a brief titled “Motion for Expedite [sic] Reargument” which he told The Post & Email has been received by the court today.  He states that in it, he “rips the government apart.”  The 29-page submission tells the justices that “You have failed us and betrayed our country by abandoning our law.” 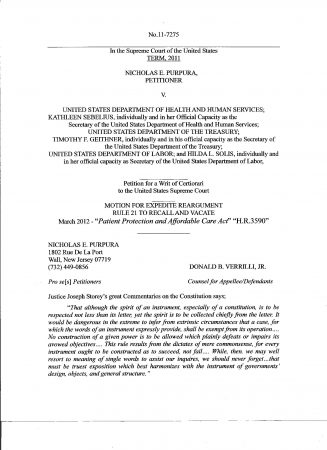 “The opening tells them why they are obligated to take it.  Our freedoms are out the window,” Purpura said.  “Look at 28 USC 455. What I was told is the reason they don’t want to take the case and why they’re most frightened is Count 6.   There are two major violations there:  one is that it’s a fraudulent health care bill by substituting another bill to get a House designation number; the Senate cannot, at any time, institute a revenue-raising bill.  We know it originated in the Senate and was revenue-raising because it was adjudicated by Judge Bishop, who stated, “This is a Senate bill.”  Two weeks after they did this, S510, the Food Bill, came down the pike.  Everyone screamed about it, and they had to rewrite the Senate’s bill in the House to get the designation number.  What is the difference Tell me what the difference is!  There is no difference except that they’re a bunch of quislings and they’re afraid to say anything.  This was intentional fraud to get it through, and I have that in my notes.”

Count 6 is detailed on page 10 of Purpura’s brief.

“The second item is:  the word I’m getting out of Washington, because I know people there, is they’re shirking their responsibility on Obama’s eligibility is that they’re afraid there might be riots if the Supreme Court says that he’s ineligible.  Well, excuse me, so then we’ll drop every law because someone might riot!  This is an outrage.  They’re disenfranchising all communities.  There is no race, religion or nationality here.  This is a country based on the rule of law, and they’re turning a blind eye to justice.

“If Justia.com was caught red-handed scrubbing 25 cases which solidify the fact that Obama is not the President of the United States under our laws of ‘natural born Citizen,’ the federal courts, which are spineless, have ignored this issue out of fear.  What’s taking place now is that there are lawsuits throughout the country over Obama being on the ballot.  The Supreme Court has an obligation to give the Democrat Party, as I wrote in there, an opportunity to put through a legitimate candidate.  This disenfranchises the entire party.

“I believe the Supreme Court is going to hold this unconstitutional based upon Cuccinelli and the 26-state case and not have to go back and look at my case because of Count 6.  But the fact of the matter is that they do have to address it.  They’re hoping Obama loses the election so it goes away.  The fact of the matter is that even if he loses the election, he appointed hundreds of judges to the federal bench illegally.  He instituted legislation throughout our nation illegally.  He appointed people to posts illegally.  It has to go back to 2008 because it is destroying our nation.  He employed people illegally, and more so, Mr. Obama is a criminal if he did this knowingly.

“If we’re right, and a judge in Georgia says that he has to produce his long-form birth certificate — if we’re all correct that he isn’t a citizen, he stole from the American people, and a RICO action should be brought against Obama, Harry Reid and Nancy Pelosi because that he affirmed that he was eligible.  They would all be liable under RICO because they conspired.

“These people sell their souls; that’s the Faustian law.  They think they’re infallible; they’re always going to be in charge; there’s nothing to worry about.  They don’t realize it’s not going to work that way, and they’re going to pay for this!

“This is the reason judicial reform is necessary, because these are courts gone wild.  And the question arises, ‘Are they traitors?’  To me, if you’ve violated your oath of office, you’re a traitor.  If you’ve violated the Constitution, you’re destroying the future of the United States of America, and our children are going to pay for this.”