SO WHO WILL BE INDICTED FIRST? 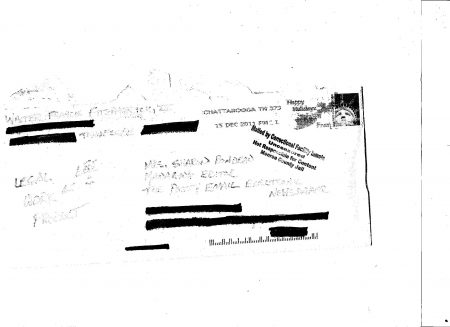 (Dec. 20, 2011) — A letter arrived in yesterday’s mail which completed our extensive compilation of evidence proving that grand juries and trial juries in Monroe County, TN are routinely “rigged” to achieve the desired result of the judges.

Grand juries are not mentioned in the U.S. Constitution, but rather, in the Fifth Amendment to the Bill of Rights, ratified in 1789 before the Constitution itself by the Continental Congress.  A letter written by James Madison, known as the “Father of the Constitution” and later the fourth President, to Thomas Jefferson, who became the third president, advocated for “the efficacy of a bill of rights in controuling abuses of power-” (page 428) and observed that “Perhaps too there may be a certain degree of danger, that a succession of artful and ambitious rulers, may by gradual & well-timed advances, finally erect an independent Government on the subversion of liberty. Should this danger exist at all, it is prudent to guard against it, especially when the precaution can do no injury. At the same time I must own that I see no tendency in our governments to danger on that side. It has been remarked that there is a tendency in all Governments to an augmentation of power at the expence of liberty” (page 429).

Therefore, the Bill of Rights was adopted by the delegates to the first Congress so as to ensure that “basic principles of human liberty” be upheld.  Originally consisting of 12 amendments, the first two were not ratified at the time, which reduced it to ten.

The Fifth Amendment is the only place in our founding documents which mentions the grand jury and reads:

U.S. Supreme Court Associate Justice Antonin Scalia has described the grand jury as “a constitutional fixture in its own right.”  Indeed, even Monroe County Court Clerk Martha Cook‘s instructions to incoming jurors state that a trial by a jury of one’s peers is a “constitutional right.”

As reported previously, some states no longer utilize grand juries for investigative purposes.  Of those which still do, the selection of jurors is expected and mandated by law to be done by automated means so as to produce a completely objective jury pool, free from human interference.

In Monroe County, either Martha M. Cook or one of the judges, particularly Judge Amy Armstrong Reedy, hand-pick the jurors who populate the grand and trial juries each year.  Judge Reedy has also sentenced a man denied constitutional due process to life in prison without adequate evidence.  It is unknown how many others have suffered the same fate for the identical reason.  Michael Ellington has been deprived of his liberty “without due process of law,” as has Walter Fitzpatrick.  Another is Dennis Burnett, from whom a Christmas card was received just today:

The text appearing with the children playing in the snow reads:

We will not hide them from their children,
shewing to the generation to come
the praises of the LORD, and his strength,
and his wonderful works that he hath done.

Even when men and women are deprived of their lives, property, liberty, and happiness, the glory of God shines through.  The Founding Fathers, and perhaps those like them today, fought “a battle of wills and numerous events that not only marked history, but also defined it.”

When men commit evil acts against their fellow man, there is the promise of redemption through Jesus Christ, whose coming more than 2,000 years ago the world will celebrate in a mere five days.  Christians believe that “demons” can be driven from man, if only he will believe, “hear the word of God and obey it.”  What other Man has suffered so much so that others may live more abundantly?

How many men are suffering now so that others might be free?

The charges against Walter Francis Fitzpatrick, III and others are false because they have emanated from groups of people which are not lawfully-assembled grand juries. The original indictments against Fitzpatrick issued on June 3, 2010 were signed by foreperson Angela Davis, who had served on a jury during the previous term when the mandatory period between jury services is 24 months.  When Fitzpatrick raised that point with Judge Jon Kerry Blackwood, he stated that “the record is devoid of any proof” that the same “Angela Davis” had served two consecutive terms.

However, the Monroe County court clerk should have been able to check, because they collect the personal information of each potential grand or petit juror.  They could have compared the information from 2009 when an “Angela Davis” was called to serve in 2010 to ascertain if it was the same person.

Fitzpatrick is therefore being held in violation of Tennessee state law (see Sheriff’s Oath of Office, p. 8); Article I, Section 16 of the state constitution and the Fifth Amendment, and all of the charges against him are illegitimate.  His Eighth Amendment rights have also been violated as a result of his solitary confinement.

The Post & Email is grateful to the deputy or clerk who allowed the aforementioned letter, which arrived yesterday in the envelope pictured above, to be sent.  And ironically, despite the sheriff’s department stamp which reads:

the Monroe County Sheriff’s Department actually is responsible, at least in part, for the content, as it has participated for years, if not decades, in incarcerating innocent men and women convicted of “crimes” brought forth by illegitimate grand juries.  Contaminated trial juries complete the process of incarcerating citizens without “due process of law.”

Fitzpatrick’s letter to us describes his observations of the grand jury “selection” process: 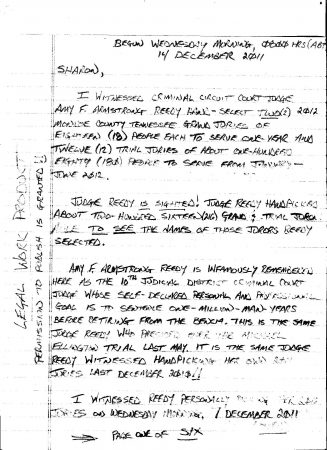 The Monroe County clerk’s office collects a great deal of personal information about each potential juror, and, as the evidence will show, the judge on December 7 knew exactly who would populate the 2012 grand juries.

The Tennessee Rules of Criminal Procedure state that a grand jury foreman is expected to “ferret out crime,” but in Monroe County, the foremen help to perpetuate it.  A legitimate grand jury does not operate with the same “foreman” for at least 27 consecutive years, a “foreman” who has never been duly appointed nor sworn in.

Cook’s instructions to the jury also state that it is the responsibility of the grand jury to “inquire into the condition and management of the jail,” but the slovenly conditions there prove that it does not.

The Tennessee Administrative Office of the Courts never answered our query about the absence of appointing orders for Gary Pettway, and we are awaiting their response in regard to why there is no official record of certain arraignments and hearings.  As of 2:10 p.m. ET on December 20, we have heard nothing, nor did we receive an “out-of-office” reply in the event that our contact, Ms. Laura Click, is on vacation.

Are there other observers to the jury selection of December 7 who will contact The Post & Email with their personal accounts of the day?  Your anonymity is guaranteed.

This lesson does not “endeth” here; please watch for Part 2.