An Illegal Alien is an Enemy Invader! 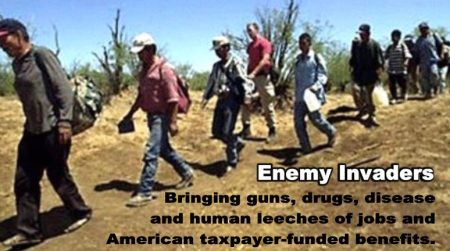 1.    Enter a country or region so as to subjugate or occupy it:

2.  Enter a place, situation, or sphere of activity in large numbers, esp. with intrusive effect.

1.  an act of invading; especially : incursion of an army for conquest or plunder

2.  the incoming or spread of something usually hurtful.

Why do they come here?  That’s simple.  They are leaving hopelessly crime-ridden, socialist countries where poverty, hunger and corruption infect their daily existence.   Consequently, when they come here, their mindset is already socialist and they are looking for free handouts from government because they believe that government owes them,  not unlike the “Occupy Wall Street” crowd who want government to do a better job of redistributing the wealth ….. to them.  The rest of their diatribe about bankers, bailouts and Wall Street is a smoke screen.

Why aren’t these illegal aliens stopped at the borders?   Because the American Federal Government refuses to adequately protect our borders.   Nevertheless, we applaud the heroics of border patrol agents that do a thankless job with way too few resources.   Unfortunately, some of these brave border agents have been incarcerated for treating these illegal alien invaders as the criminals they are.

Why are violent and brutal Mexican drug cartels shipping drugs across the borders, because way to many Americans are hooked on drugs and a decadent and irresponsible life style?

What economic magnets draw these illegal alien invaders across our borders?  Very generous safety net benefits; free housing; free, bi-lingual education; free health care and a Federal Government that does not adequately enforce current laws against hiring illegal aliens.  Added to this gross negligence by the Federal Government, are cities, counties, states and churches that set up sanctuary policies, giving a free pass to illegal aliens, or a place to hide.

Who pays for this government-sanctioned illegal alien invasion?  The legal American taxpayer!

This illegal alien invasion is comprised of human leaches that feed off the enforced generosity of legal Americans.   This rag-tag bunch of socialist peasants have no intention of assimilating into the American culture and adopting the English language.  They boast of their rights under American law, when in fact they have no rights as illegal aliens.  They spit in American faces and tell us they are going to take back “their” country.  They have babies in America, which then become American citizens under the misinterpretation of the 14th Amendment.  They are reproducing at a rate that is twice the reproduction rate of non-illegal aliens.  They are supported by numerous immigration groups that use American law against us, to support the non-rights of illegal aliens.

If an armed invasion came across our borders, we would instantly defend those borders with American troops and the full force and fury of the American military might.  In the ensuing battle, thousands would die.   Right now our southern border is a war zone by any definition.  So why would the federal government not treat this illegal alien invasion at our southern border with an equal military force, with orders to shoot to warn first and shoot to kill if the illegal alien refuses to turn back?   If this policy was adopted, the illegal alien invasion would stop, literally overnight.

But in a recent AP News Break article on Yahoo news we learn just how the government is handling America’s northern border.  The new policy is tantamount to “looking the other way” and border patrol agents doing crossword puzzles in their patrol cars instead of random inspections at airports and transportation hubs, like they were doing before a new directive came from Washington, DC telling managers to scale back such inspections.

But in fact, there is no price for an illegal alien to pay by chancing the border crossing, except maybe his life if he chooses the wrong place to cross.  The desert can be very unforgiving.  Yes, they might be caught by the Border Patrol and sent back to Mexico, but they will just keep trying until they cross the border successfully and find themselves a place to hide in America.  Once they have been here for awhile, they will then look for a job at ridiculously low wages and make application for welfare benefits to supplement their income, or enter into a life of crime to support themselves, or their illegal drug habits they picked up south of the border.

The claim that America is a country of immigrants and was built by immigrants, as a way to rationalize this illegal alien invasion, is specious.  The lion’s share of the immigrants that built this country came here legally and there was no safety net benefits, free housing, free education, or free health care.  They had to have a sponsor.  They had to learn English and American history in order to become a naturalized citizen.   They had to swear allegiance to the Constitution of the United States.  They took classes and attended meetings for five years before they could take the test and recite the pledge.  These people who became naturalized American citizens were and are eternally grateful for the opportunity to enter the land of the free and fully intend to assimilate into American culture as best they can.

What does this illegal alien invasion do?  They hide in the shadows.  They get sympathetic legal groups or churches to hide them or to defend their non-right to stay here.  If they have a visa, they over-stay their visa and embed themselves in illegal enclaves.  Many who are caught by authorities are given a free pass.  Many commit crimes, end up in our courts and jails and the American taxpayer gets to fund their court costs and 3 meals a day, television, free health, dental and eye care, exercise facilities, a library and other benefits while they are in jail that most legal Americans must pay to use.

Just recently ICE used 2,000 agents to round up 3,000 illegal aliens who have committed serious crimes and deported them, from a list of over 500,000 known illegal alien criminals that are purported to be in America.  500,000 known criminals, mind you!  Many of those deported will be back in America within a few weeks or months because they have learned how to use our system for their own gain.

Illegal aliens end up in our schools where the school district has to hire bilingual teachers and tutors to attend to their special needs.  They get free meals in school.  If they stay in America long enough, some states (California and Texas) give them in-state tuition rates to attend college.

The illegal aliens end up in hospital emergency rooms without insurance and because of an ill-advised American law, the hospitals have to attend to their injuries or other health issues, at a cost that must be born by the legal American taxpayer.  Many hospitals are going broke or shutting down because of it.  One hospital in Florida, after spending over a $1.5 million on health care for just one illegal alien, chartered a plane and flew him back to the country from which he came at an additional cost of $30,000.  An administrator for that hospital testified before Congress on the exorbitant costs to treat illegal aliens, in not only her hospital but all of Florida as well.  It’s outrageous!  See her testimony HERE.  (http://www.youtube.com/watch?v=bLJxmJZXgNI)

If an American breaks a law there is a price to pay.  If an illegal alien breaks the law, in way too many cases they get a pass.  Two of Obama’s relatives now reside in America, on the American payments-to-illegal-aliens plan, at the expense of the American taxpayer.  Obama is more than wealthy enough to support these two relatives but he would rather raise taxes on the wealthy in his never-ending quest to divide the rich and the poor in class warfare, thus relieving himself of the financial burden.

The result of this massive invasion of illegal aliens will be an America that no longer resembles a Constitutional Republic, where individual rights were sacrosanct and where life, liberty and the pursuit of happiness were sacred gifts from our creator.  In its place will be a country of whiners, complainers and ne’r-do-well miscreants that will riot in the streets if they don’t get what they want.  Taxes and regulations will increase exponentially and the entrepreneurs that built this country may just find another country to build, in a re-play of Ayn Rand’s book, “Atlas Shrugged.”

Someone might just as well come up with a flag that features both the American and Mexican Flag and who knows, maybe even the Canadian flag as well.  “The Parallax Prophecies” predicts that if America’s Constitutional Republic dies, we’ll end up just like the European Union where productive countries will be forced to bail out profligate ones, where the debt of grossly negligent countries will be forgiven (Greece) and the productive ones (Germany) forced to take up the slack in order to keep the Union together.  Because of a planet-wide, failed socialist policy, negligence, corruption and bad behavior are rewarded and achievement and production are penalized, all based on the flawed principle of irrational compassion ….. for votes.  This is an upside-down, Alice-in-Wonderland world that is doomed to fail with drastic consequences.

As a result, the entire world of countries will be brought down to the lowest common denominator and mediocrity, corruption and daily riots will become a way of life.  This will lead to war and maybe the final war that could set a civilized planet back to the medieval, dark ages, where the twin evils of hopelessness and despair reside.

Having said all this, are there some good-hearted, well-meaning people who come across the border looking for a better life, of course?  But America is at a point in time that parallels the sinking of the Titanic.  If every person on the iceberg-stricken ship had tried to get on the small number of lifeboats available, the lifeboats would have been swamped and every single passenger would have succumbed to the frigid waters, or drowned.  There would have been no survivors at all.  If the passengers in the lifeboats offered their hand to those in the water out of compassion, just like the government offers its (our) “hand” to the illegal alien invaders, the results would have still been the same.  All would have drowned, even those in the lifeboats.

So America had better get a handle on the illegal alien invasion now, or suffer the irreversible consequences.  But like so many other problems that America and Americans must endure, government lets the problems go beyond the point at which they can be corrected.  So we are not holding our breath that the government will do anything about the illegal alien invasion other than, in the end, grant all of them amnesty.

And the world’s governments and the people go around and around in an infinite number of circles, just like the stupid dog that is trying to bite its own tail….with the same results.  The dog finally gives up, but governments never give up going in circles, in a continuous, never-ending repeat of all that is insane.

An Illegal Alien is an Enemy Invader! added on Sunday, October 30, 2011

6 Responses to "An Illegal Alien is an Enemy Invader!"