AN OPEN LETTER TO OUR ELECTED LEADERS

3.    You think that forged and photo-shopped CERTIFICATION of LIVE BIRTH (COLB), that doesn’t name the parents or their nationality is the same as a CERTIFICATE of LIVE BIRTH (aka a Birth Certificate), with the name of the hospital and the name and signature of the attending physician?

4.    You don’t know that AFRICAN is not a RACE, but BLACK and/or NEGRO are? (some of my best South African friends are WHITE/CAUCASIAN)

5.    You think that LTC Terry Lakin disobeyed legitimate orders, instead of becoming a patriotic political prisoner in Leavenworth – for asking the same question that Donald Trump has asked: ‘Mr. Obama, can you prove that you can issue anything other than unlawful orders?’

6.    Using a stolen CT Social Security number and a fraudulent Selective Service Registration is not important as it relates to determining eligibility for the Office of President and Commander-in-Chief? (Hmm.  LTC Lakin and Donald Trump may be on to something here, don’t you think?)

7.    You think that it is perfectly OK for Obama to spend $2 million of our taxpayer dollars so that our Department of Justice (sworn to uphold and defend the Constitution, not a usurper) can hide his public domain bona fides, so that you can acknowledge and legitimize the equivalent of a GHOST for your President and Commander-in-Chief?

8.     You think that it is perfectly OK for Nancy Pelosi and the DNC to commit blatant election fraud by signing two different notarized Official Certifications of Nomination for Obama:

b.    One for the  49 other States (same date, notary, and signatures) but without the required statement that the candidates are legally qualified to serve under the provision of the U.S. Constitution. (NOTE: the space for this removed text was deliberately covered up by moving the lower text and signatures up 2 lines to fill in for this missing statement). 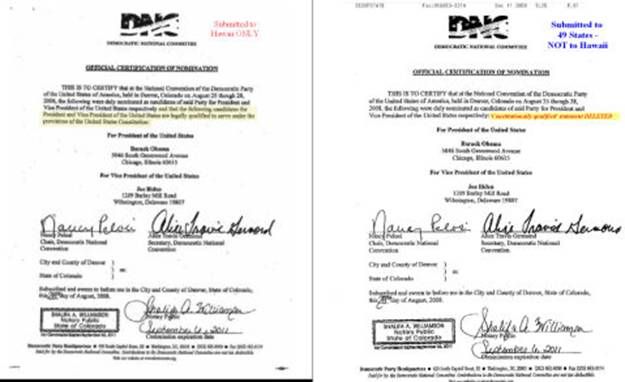 without knowing that you yourself, by not doing anything about this, are committing Misprision of Treason?

9.    Your referring to our Constitutional Republic as a ‘DEMOCRACY’ is not a deliberate effort to replace our Constitution with the failed systems of Democracies and Marxist/Socialist/Communist/Islamist Systems that have plagued the world for centuries?

How STUPID is that?  And what are you, in your capacity as a responsible elected official or judge or law enforcer or investigative reporter, going to do about these 9 facts that indicate that there is “Treason in Progress Here”?:

3.    A CERTIFICATION of LIVE BIRTH (COLB) is NOT a Birth Certificate;

5.    LTC Lakin in Leavenworth for asking the same question as Donald Trump;

6.    Obama using a stolen CT Social Security number and a fraudulent Selective Service Registration to take over our Government by Dissembling, Fraud, and Deceit;

7.    Obama spending $2 million of our taxpayer money in order for our DOJ to defend the indefensible on indefensible grounds – that We The People don’t have any STANDING under our Constitution;

8.    Election fraud by Pelosi and the DNC: 2 different notarized OCON’s, with only one (1) – for Hawaii – declaring Obama to be legally qualified per the Constitution (perjury);

9.    Calling our Constitutional Republic a ‘Democracy’ – a system of government that has always failed and descended into chaos.

P.S.  These are questions that Mr. Trump and many more voters may soon be asking.  Be careful how you answer, as your future employment and/or living quarters may depend on it.

Something Stupid This Way Comes! added on Saturday, April 23, 2011

11 Responses to "Something Stupid This Way Comes!"