EGYPT AND THE MIDDLE EAST:  WHAT NEXT?

(Feb. 2, 2011) — What is striking about the Chessboard moves and the current crisis in Egypt is the rapidly changing scene and evolution of events and uprisings. The Chess Masters in Iran and the Muslim Brotherhood are playing out their moves very judiciously and both fully understand the domino effect of radical Islam, the caliphate and Jihad. Yes, we do have three games in one: Chess, Poker, Dominoes!

This is not a set of events that one has the luxury of focusing upon individually. Egypt is key but not the only chess move in play. The chess board, or match, is a series of matches with many simultaneous games being played at once. The master is adept at playing many at once as Grand Master Boris Spassky and others did in worldwide chess competition.

The moves on the chess board have global impact because of energy, global trade, and finances. If the trade routes are cut off or disturbed when oil and other goods cease flowing, the world economy (already at a precipice) could implode in hours and days with a twelve day global financial collapse scenario. After-all, it ostensibly started as a food problem in Tunisia; say the pundits, but of course, it is much more.

The dollar and global currencies, already falling in value, would plummet. The year 2011 may be, in fact, the year of the Apocalypse or at least a series of apocalyptic events that changes the United States and the world as we know it.

Why are there no serious initiatives on the part of countries outside of the Middle East? Iran and Syria continue to stir the pot unmolested! Iran no longer hesitates to state publicly that its forward defense line now passes through “Lebanon and Palestine.” In practice, the Lebanese-Israeli border is in fact Israel’s border with Iran. Let us not skip over the importance of Lebanon. Israel is now tightly surrounded by a well-organized radical Islamic effort, akin to the pre-1967 war status. Enemies became peaceful neighbors, and now those peaceful neighbors are no more.

Power in Iran is closely held by the Mullahs and IRGC (Iranian Revolutionary Guard) and no visible external support of the Iranian opposition forces. China and Russia comfortably play their pawns on the chessboard as they view the demise of the United and States and other semblances of historic Western power. I believe there is a real connection between Soros/Obama factions (the Progressive Socialists) in this global restructuring. 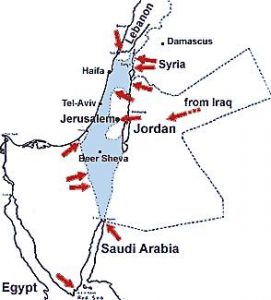 Speed is paramount now and political planning for 2011 and 2012 is a fool’s errand. The time is now to think outside of the daily routine. Chess Masters in Iran have played their cards well, and now it’s a domino effect. They have planned well, and useful dupes are doing their bidding. I am impressed that the Muslim Brotherhood (MB) is being talked about much more in depth, but we need to show that it is orchestrated, right down to Muhammad el Baradei. This is not a set of events we have the luxury of focusing upon individually.

No one knows what will happen in Egypt in the next few days. Will the Mubarak government succeed in clamping down on demonstrators and put an end to the reform movement? Will Mubarak manage to stay in power by offering political and economic reforms? Or is he finished? If so, what happens next? Today he offered to step down and stay out of the scheduled September election cycle in a speech the world awaited with baited breath. But alas, early word is that is not acceptable to the rioters.

No one knows the answer to those questions, including the Egyptians themselves. But these demonstrations have the potential of being like the fall of the Berlin Wall and the Shah of Iran, with ramifications for every Muslim country, secular, or otherwise.

So far, the Obama administration seems unsure how to respond to the Egyptian demonstrations. They’ve done everything from seeming to support the country’s democratic movements to seeming to support Mubarak’s continued efforts to remain in office. They angle to arrive at a peaceful transition, a coordinated succession, but the cards left in the deck for the west are not Aces, Kings, or Queens.

February 1 has seen the largest congregation of protesters in Cairo’s Tahrir Square since protests began in earnest there January 25. However, media reports appear exaggerated. Based on the size of the square and the average limit of one person occupying 2.5 square feet in a densely packed crowd, Tahrir Square can accommodate approximately 200,000 people. However, images from Tahrir Square show empty spaces in the middle of the square and along the edges, meaning it is not yet at capacity.

This is significant, as the difference between 200,000 and 2 million protesters is 3-4 percent versus 26 percent of Cairo’s population of 7.75 million. This difference holds political consequences, a small minority or a sizable part of the population indicate the driving forces, showing us that political inducement is underway, not just a band of hungry people.

For Iran, Hezbollah serves as a live and successful model for these revolutions, one which is reflected in other organizations such as Hamas, Islamic Jihad, and other Palestinian terror organizations, as well as extreme Shiite organizations in Iraq trained by Lebanese Hezbollah. Hezbollah is nourished by the growing strength and power of Iran and draws upon its successes, and both parties recognize that the fall of one also signifies the demise of the other, and the enemy of my enemy is my friend.

The Special Tribunal for Lebanon investigating the Hariri murder, which is about to publicize its findings, may offer an opportunity for the West to reverse the trend and take the initiative to reduce Iranian influence in Lebanon, and weaken the power of Tehran. However, the current state of affairs will likely eclipse any opening there for the west. Confusion is a great cloak, and Iran now has a huge cloak to cover Hezbollah.

It appears that our State Department and White House still remain asleep at the switch, while the Shiite Iranians and Muslim Brotherhood are very busy and fastidious in resetting the chessboard in the Middle East to their liking. What has Iran been doing in addition to moving their nuclear program forward? They are actively becoming the hegemonic power of the Middle East and are supporting the international jihad, and the recreation of the Caliphate, and unlike the United States, they are very clever at using proxies to do their dirty work.

Iran has planned a larger, bolder strategy for the demise of Israel, and it is unfolding now! There is far too much coordination to assume otherwise, and the proof is in the movement of the chess pieces now becoming manifest.

In Lebanon, the silent 2008 coup Hezbollah orchestrated is almost complete now. And now, the STL is ready to produce indictments. Will the West now be too cowardly to deal with the facts and conclusions in fear of Iran in light of recent events? Will it even matter now that Iran has, through its proxies and collusion with factions in so many countries, placed the term Caliphate back upon our lips?

Iran is also the behind the scenes on the Palestinian initiative to declare statehood in 2011. Coupling these efforts with the possible Islamization of so many other countries, along with extensive dealings and fraternization with Venezuela, North Korea, and others, one can see the global impact, and it does not bode well for the west.

The Iranian puppet master has set the chessboard of the Middle East in such a manner that they control almost all of the attack points, and a feckless west is doing nothing, thus appearing to have no power to change the tide. Continual signs of weakness in the West embolden Iran more each day. It is clear, Sharia Law is on our doorstep, and as Code Pink and other anti-American leftist groups support such efforts, our own fabric of society is disintegrating. Seen any new Mosques pop up around you lately? Mosques do not follow Muslim populations; Muslims follow the path to Mosques being built. Continual infiltration is a master chess move, and Iran and their Muslim Brotherhood allies are winning that battle as well.

The pawns are strong now and their ability to move has been changed. They are more akin to Rooks and Bishops and are ready to pounce. The Israelis have been effectively set into a corner, and the west is not a friend anymore, and they now have to deal with a paradigm they have faced in the past, a complete encirclement of enemy States. Jordan’s King Abdullah II just fired his cabinet for what some reports allege was consorting with the Muslim Brotherhood, and once again a real concern once again lies on the eastern Israeli border.

The change in the pieces on the Chess Board is virtually complete and the puppet master has won, again; because of the weakness of US and other western leadership. Consider this; Sunni uprisings in Lebanon after Hariri is removed from power took place just days before the Tunisian man self-immolated, sparking riots. Then countries across the entirety of the Mediterranean erupted in chaos. And now, supposed unrest is erupting across the globe, coincidence? NO!

Iran’s master chess moves now force Israel to fight a multiple front war with little help expected from the west. If this cycle continues, the west may be so embroiled with internal chaos that Iran can act with relative impunity. A preemptive strike by Israel now, will mean a simultaneous fight with Hezbollah as well as Hamas, a founding member of the Muslim Brotherhood. Israel understands this is the new chessboard; US authorities do not, and the United Nations is now a caricature of odd proportions, dubious intent, and blatant conspiracy.

Iran is not getting distracted by its ongoing efforts to undermine the U.S. troops and interests in Afghanistan on one side and Iraq on the other, nor in Syria and Lebanon. It appears to welcome it, as chaos is their ally.

U.S. policy toward Iran and others must change now to better promote our national security interests and strengthen our resolve to face this growing threat and the coming global Caliphate. We must change our strategy soon before more of our men and women die for naught. We must also prepare for it to spill over right here, at home. Remember, Iran watches us closely, has prepared intensely, and is a master of exploiting any event for its own ends, and make no mistake, their proxies are already here.

Iran has set the chess board, held aces up their sleeve, and the dominoes are falling. They are firmly in control of the puppet strings and all the chess pieces are not just in the Middle East anymore; all the while Russia, the USA, China, and western nations just posture. Iran is an adept Puppet Master, a Poker-faced powerhouse, and a Grand Master Chess player (and we and others have allowed it to happen!).