“THEY WANT THE TRUTH” by Sharon Rondeau (May 24, 2017) — In a tweet at approximately 3:36 PM EDT on Wednesday, Fox News host Sean Hannity disputed claims by the “Destroy Trump Media” that he was pressured to extend his condolences to the family of murdered DNC staffer Seth Rich. “What I said came from […] 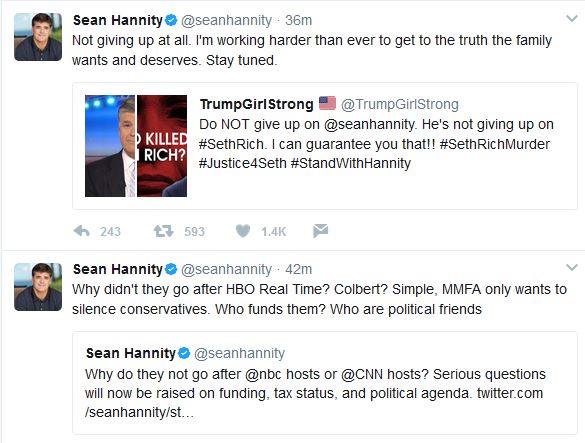 FOLLOWS “I AM NOT DISCUSSING THIS MATTER AT THIS TIME” by Sharon Rondeau (May 24, 2017) — On Wednesday morning, “Hannity” Fox News host Sean Hannity tweeted, in an apparent follow-up to his announcement last night that he would not report further on the case of murdered DNC employee Seth Rich “at this time”: Not […]

TRACING THE POLITICS AND THE MONEY BEHIND OBAMA’S CAMPAIGN by John Charlton (Dec. 12, 2009) — After 12 months of investigating the truth behind the lies which are Obama’s public persona, citizens should investigate the connections and players in the campaign of misinformation waged by Obama supporters during the 2008 Election. The results won’t be […]