FOLLOWS “I AM NOT DISCUSSING THIS MATTER AT THIS TIME” 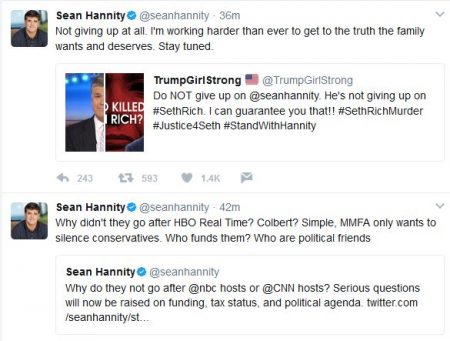 (May 24, 2017) — On Wednesday morning, “Hannity” Fox News host Sean Hannity tweeted, in an apparent follow-up to his announcement last night that he would not report further on the case of murdered DNC employee Seth Rich “at this time”:

Not giving up at all. I’m working harder than ever to get to the truth the family wants and deserves. Stay tuned.

On his 10:00 PM show last night, Hannity said that he has been in touch with Rich’s brother Aaron and his parents. “I cannot imagine the pain that they are in…out of respect for the family’s wishes for now, I am not discussing this matter at this time,” he said.

The broadcast quickly segued into former CIA Director John Brennan’s testimony to a Senate panel earlier in the day regarding allegations of “collusion” between Trump campaign aides and Russian-government operatives.

Many of Hannity’s followers immediately tweeted disappointment and the sentiment that he “sold out” his audience at the behest of Fox News bosses.  Some continued to support him.

In a stark contradiction, on his Tuesday radio show, which is aired in multiple markets across the country, Hannity had said that the same family members he later mentioned on his Fox show “are not the family members who want this story to go quietly into the night. They want the truth.”

Seth Rich was murdered near his Washington, DC home on July 10, 2016. He had been employed at the Democratic National Committee (DNC) in the area of voter registration.  Renewed interest in the case occurred early last week after a private investigator working independently of the DC Metro Police Department to find Rich’s killer(s) told a Washington, DC-based Fox News affiliate that evidence exists showing that Rich was in touch with WikiLeaks.

On July 22 of last year, 12 days after Rich’s murder, WikiLeaks began releasing thousands of emails showing that the DNC had not remained neutral in the designation of the Democrat Party’s presidential nominee.

While WikiLeaks founder Julian Assange has stated unequivocally that WikiLeaks never divulges its sources, he has strongly implied that Rich was a source. In August, the organization offered a $20,000 reward for information leading to the apprehension and conviction of the perpetrators.

In an open letter appearing in The Washington Post on Tuesday, Rich’s parents, Joel and Mary Rich, implored investigators and the public at large not to “politicize” their son’s tragic death, which remains unsolved.  The Riches have made very little public comment given that a professional Democrat crisis consultant, Brad Bauman of The Pastorum Group, is employed as their official spokesman.

On Sunday night, Hannity tweeted that “Complete panic has set in at the highest levels of the Democratic Party.”

Also on Tuesday, Fox News removed an article in which reporter Malia Zimmerman claimed to have spoken to a “federal investigator” who allegedly informed her that he had found evidence on Rich’s computer that Rich had been in communication with WikiLeaks through an affiliated journalist, the now-deceased Gavin MacFadyen.

Other sources report that the FBI, which Zimmerman did not specifically mention, claimed not to have Rich’s computer in its possession.

A video report aired during “Fox & Friends,” however, has not been removed as of this writing.

Rather than launching their own investigations, the mainstream media has taken the unusual step of not only advocating for the family members, but also attempting to show that the theory that Rich was murdered in retribution for releasing DNC information has been “debunked” while offering no documentation to that effect.

In an article published Tuesday evening, NBC News faulted Fox for failing to apologize to Rich’s parents in its statement indicating that Zimmerman’s article had been removed. It also claimed that Hannity had been “silenced” in his aggressive coverage over the last nine days.

Speaking of Hannity’s alleged “conspiracy” about the murder, NBC’s Alex Seitz-Wald wrote, “Later Tuesday, the conspiracy’s most prominent proponent, Fox News’ Sean Hannity, announced on his show that he would stop discussing the case ‘for now.’ It was a major back-down for a prominent host who had used his Twitter account earlier to vow he would never be silenced by “Liberal Fascism.”

Similarly, CNN insisted that there is “no real evidence” to support the theory. 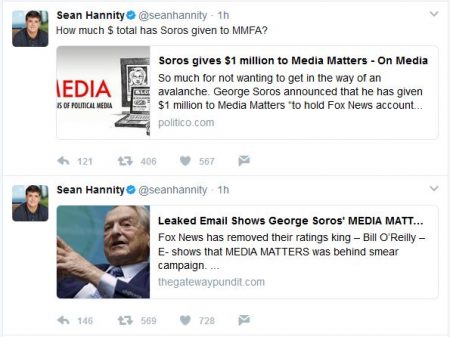 Some speculated, following Hannity’s Tuesday night broadcast which ended with his saying that he would “hopefully” return on Wednesday night, that he will soon be leaving Fox News.

“And all you in the liberal media, I am not Fox.com or FoxNews.com; I retracted nothing,” Hannity said on his Tuesday radio show.

On Wednesday morning, Hannity issued a number of tweets indicating that Media Matters for America (MMFA), a George Soros-funded enterprise, has waged a smear campaign against him and other “conservative” Fox News commentators.

A multi-billionaire, Soros provided information to the Nazis during World War II as a youth and has been said to have been responsible for the devaluation of currency in a number of European and Southeast-Asian countries. He has launched or is affiliated with dozens of left-leading causes promoting open borders, Muslim immigration to the United States, environmental causes, and globalization.

Perhaps unbeknownst to the public, the non-profit Judicial Watch has been requesting government documents on the case since last year.  “You can’t trust the media to do it; you can’t trust Congress to do it, but you can trust Judicial Watch to ask the tough questions and demand answers,” JW president Tom Fitton said in a statement published on Tuesday.

One Response to "Hannity: “Not Giving Up At All”"