What’s Wrong with our Country? The Sad but True Opinion of an Ordinary American Citizen

(Oct. 14, 2020) — Regrettably, our federal government seems to be rampant with corruption.  It is beginning to look like anyone who wants to be a “public servant” at the federal level either already is, or soon will be, a crook!  This certainly is the way it looks.  As an example, both political parties’ candidates for the presidency are currently under investigation for alleged civil or criminal wrongdoing.  But, guess who is “investigating” them!  Other elected or appointed officials in our government who definitely are crooks!  This, and more (below), must be overwhelming and confounding for our system of law and order and checks and balances.

As an example of what I’m talking about, can you say “James Comey!”  Comey, as you might know, was the former Director of the FBI, who was instrumental in saving Hillary “What Difference Does It Make” Clinton from being locked up, and who was actively involved, but doesn’t remember it, in the coup to remove from office the people’s duly-elected president, Donald Trump.  Wouldn’t you love to see Comey wipe that sanctimonious smirk off his face and,show everyone what’s in those blacked-out, redacted messages?  As far as I’m concerned (and I’ve experienced it myself in person), the Federal Bureau of Investigation has become a rogue “law enforcement” agency.  They have a huge amount of work to do to restore their good reputation.  And, if I may share a bit of friendly advice with them, they will not be able to reclaim their previously good standing by trying to cover up what they have done and telling lies about it.

Then, there is the CIA, possibly the most corrupt and dangerous federal agency of them all.  If I remember correctly, Director Gina Haspel testified in front of one or two no-one-ever-is-held-accountable Congressional committees.  She stated that the agency never assassinated anyone, and certainly did not assassinate any world leaders.  This is arguably, if not totally, false.  Warren Commission findings aside, wasn’t the CIA involved in a conspiracy with the Mafia in the assassination of our own country’s former president, John F. Kennedy?  Lee Harvey Oswald did not act alone (assuming he might have been a participant to some degree in the overall conspiracy).  Which brings to mind, do you know who “James Files” is?  I suggest you conduct a little due diligence on James Files and his associates.  It is easily available on the internet.

In addition to assassinations and other shadowy activities, the CIA has been deeply involved in one other particularly reprehensible corrupt and dangerous activity, and it involves tremendous risk to our country’s national security.  Remember “John Brennan?”  He was Director of the Central Intelligence Agency during Barry Soetoro, aka Barack Hussein Obama’s, second unconstitutional term as president (as well as an advisor to Obama in years prior to that).  He also was a rumored to be a member of The Muslim Brotherhood.  It is strongly suspected by some that Brennan helped Obama acquire official-looking identification documents (including a forged Hawaiian birth certificate.  He also is said to have destroyed government records which might have been incriminating to Obama.  More about this treasonous behavior is discussed below.

But first, let’s talk about Chief “Justice” John Roberts, Jr. and his seven or eight associate “justices” on the U.S. Supreme Court.  Roberts, who had to know about Barack Hussein Obama’s background and that it rendered Obama constitutionally ineligible for the presidency (he was not and is not a natural born American citizen), nevertheless swore in Obama as president in January 2009 and for a second term in January 2013.  The Supreme Court has refused to take up or rule on cases in which petitioners have asked to be shown Obama’s credentials.  They like to say that these petitioners have no “standing.”  Heck, even I have standing!  I am a law-abiding, tax-paying, voting, patriotic American citizen!  I experienced pain, suffering, and various other types of harm due to Obama’s usurpation of the presidency and command of our country’s armed forces (just ask my wife!).

Note that Associate Justice Clarence Thomas once commented that the Supreme Court was “evading” the issue of presidential eligibility vis-a-vis Article II, Section 1, Clause 5 of the Constitution.  By failing to define or interpret the meaning of “natural born American citizen” as it relates to the offices of vice president and president, the High Court is derelict in its duty to interpret the law, especially as this matter pertains to one of the most relevant and important parts of our Constitution.  These crooked justices are appointed for life and have chosen to act politically instead of impartially and judiciously.  Are they infallible gods?  Are we their servants?  May I suggest term limits, recalling, or indicting them?

Next, the United States Senate, House of Representatives, and their Committees.  If (and I emphasize “if”) they ever did do anything substantively, it probably would be corrupt!  They are supposed to be our representatives and our voices in government.  Ideally, they should work “across the aisle” and attempt to do what is right in all areas of life for all people in our country.  However, there is one glaring problem.  Our representatives are silent about what, in my opinion, is the greatest constitutional crisis in our country’s recent history.  They are complicit in it by their silence if not by actual deeds.  Evidently, one assumes, they fear reprisal or that they might be at risk in some legal sense.  Misprision is not out of the question!  This entire ugly matter is what some who work in the capital refer to as the “Open Secret,” and it is having catastrophic ramifications which are now more than ever threatening our way of life and the very existence of our constitutional democratic republic.  You and I see the results of it every day and every night all over our country.  If you don’t know what the “Open Secret” is, what its effects are on our society, and what we as American citizens should try to do about it, then I respectfully suggest that you look into the matter before it is too late!  I now am going to tell you some of the details of the unquestionably most corrupt and treasonous behavior being committed by our federal government. 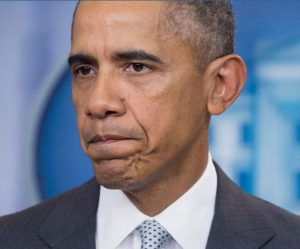 It all comes under the heading “Barack Hussein Obama.”  As I indicated above, Obama was not constitutionally eligible to run for or be elected president.  He, though, was permitted by traitorous crooks in Washington, DC to do it twice!  In 2008, then-Speaker of the House and Chairperson of the Democrat National Convention Nancy Pelosi signed fraudulent Certificates of Nomination implying that their presidential candidate, Obama, met the qualifications to be placed on states’ general election ballots. I believe our own CIA also played a sinister role in Obama’s sudden rise to power.  This included the little-known allegation that they hired him as an operative, or actual agent, and sent him on assignment to the Middle East in the early 1980’s.  While there, it is reported that the CIA assisted him in attending Patrice Lumumba University in Moscow, Russia.  This occurred during Obama’s “missing” years in which he falsely claims that he was attending Columbia University in New York.

In short, the Central Intelligence Agency identified Obama early on as a Manchurian Candidate and groomed and funded him for the U.S. presidency.  Obviously, this is not the mission of the agency!  In fact, it violates their mission.  I maintain Director John Brennan was in the conspiracy up to his traitorous neck!  The truth of the matter is tha Obama was most likely born in a foreign country (his bio published in 1991 and undisputed until 2007 stated that he was born in British Kenya), was then adopted by an Indonesian father, Lolo Soetoro, and became an Indonesian citizen by the adoptive name Barry Soetoro and practitioner of the Islam religion.  Afterwards, he reportedly lived with his maternal grandparents, the Dunhams, in Honolulu, Hawaii.  Upon completing high school, he came to the continental United States and studied for two years at Occidental College in Los Angeles, where he may have received financial aid as an Indonesian foreign student.

By this time, Obama, aka Barry Soetoro, had been radicalized and mentored by communists and had become known to the CIA.  As previously indicated, the agency began funding Obama and grooming him as a future Manchurian Candidate for the presidency.  Numerous other conspirators were involved, including rich Saudi connections, several foreign and domestic terrorist organizations, the CPUSA (Communist Party USA), the Democrat Party, billionaire globalists, and philosophically far-left liberals.  As they say, the rest is pretty much history!  One important point of emphasis, though, is that Obama always was a racially-driven individual, a “community organizer” turned politician.  Things in our country started going downhill almost from the beginning of his first term in office.  It is easy to see where Obama’s deceitful leadership and fanatical followers have taken us today.

One other thing:  Obama was not our first black or African-American president!  Besides the fact that he was never a real, constitutionally-qualified president at all, he was and is best described as a Muslim and Arab-American (ethnically 50% Caucasian, only 6% African, while 44% Arab).  His Arab ancestors in Africa had slaves.  Don’t kid yourselves.  Obama is still deeply and treasonously involved in racism and politics.  His involvement, as always before, is largely un-American and extremely divisive.

This whole episode in our country’s history is RICO-like public corruption at its worst.  America has been living a lie.  The historical record needs to be corrected and those responsible in a criminal sense brought to justice.  Supposedly, no one is above the law!  If I’m not mistaken, I believe President Donald Trump recently pondered out loud, “We shall see.”

So, may God bless and help save the United States of America as our wise and far-sighted founding fathers intended it to be, with equality and impartiality for all citizens.

What’s Wrong with our Country? The Sad but True Opinion of an Ordinary American Citizen added on Wednesday, October 14, 2020

5 Responses to "What’s Wrong with our Country? The Sad but True Opinion of an Ordinary American Citizen"