Take Your Mail-in Ballot To The Polls…If You Want Your Vote to Count! 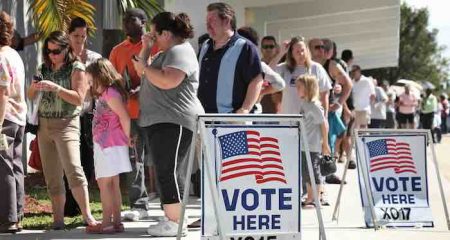 (Oct. 10, 2020) — President Trump must be reelected with an historic landslide victory on November 3rd, which is why it is extremely important that every Trump vote must be counted for him. The Dems, and their friends in the media, fictitiously tell us that Harris, sorry, I meant Biden, continues to lead in the polls, as they promote the false accusations that the only way President Trump could possibly win is by cheating and, therefore, Harris—whoops, Biden—has been instructed by his handlers not to concede the election until all the mail-in ballots have been counted, which might take days and many pre-planned legal challenges.

In their now well-oiled-tactic of accusing the enemy of what they are in fact doing, mandatory mail-in ballots in Democrat-controlled states have become an additional component of a multi-faceted plan to actually steal the election in favor of a Harris win.  (Darn, I keep forgetting Biden is on the ticket). Please know the Covid virus emergency was weaponized for their political agenda and that mail-in ballots have literally nothing to do with keeping the voter safe from the virus at their usual polling place. Mail-in votes through the US Postal System (USPS) create multiple opportunities for fraudulent handling which, in turn, disrupts the chain of custody of the ballot.

But, nonetheless, for the plan to work,  Democrat Governors must convince their citizens that there is no such thing as voter fraud through mail-in ballots. They must continue to stay the course that there is little to no concern for fraudulent or missing ballots, even though a number of postal workers have been found and arrested for dumping ballots. The governors then flip things over by justifying that these reports are nothing more than a Republican conspiracy to make the voters think the mail-in system has been corrupted so that the Republicans can steal the election. Saul Alinsky, the author of “Rules For Radicals,” would be a very proud man today.

Please be aware that the postal workers’ union has endorsed and supports the Harris-Biden ticket. Under normal circumstances, the term “support” might mean to assist and/or to offer guidance, but these are not normal times, where support has easily become a platform for cheating. The USPS system cannot be trusted as a neutral transporter of your constitutional right to vote—because they are not. We find that there would be very little difference between giving your ballot to the US Post Office or to the Democratic National Committee (DNC), where your vote may be placed in a circular file or dumpster for disposal. Here is just one example of a postal employee dumping mail-in ballots:

Don’t play their game. Don’t mail your ballot. President Trump must be reelected in a landslide

To recap, the Dems’ devious plan is actually quite simple: continue to make the voters believe that Biden, whoops, I meant Harris, leads in the polls, so that on Election Day when Trump wins, it will be easier for them to say he cheated, and then comes the final coup de gras, with massive amounts of fraudulent mail-in ballots suddenly appearing out of thin air, to give the win to Harris while Biden is 25th’ed and transported to a nursing home.

Don’t play their game. Don’t mail your ballot. President Trump must be reelected in a landslide.

Your vote for President Trump must be counted and here is the only way to insure that:

As you know, this is not an election between Democrats and Republicans; no, this is the election for the direction and the future of America, “because without America there is no free world.” Will we continue to be that Shining City on the Hill, a free country, with liberty and justice for all, or will we become a hard-core socialist country where the US Constitution and Bill of Rights will no longer exist?

Pray as if our lives depend on it. Oh, yeah, and VOTE FOR TRUMP II—THE SEQUEL!

Fredy Lowe served proudly in the United States Marine Corps and the New York City police Department. He has been a citizen journalist for nearly ten years writing for Canada Free Press, Before It’s News, Conservative News & Views, Ammoland, The Post & Mail, and others.

Take Your Mail-in Ballot To The Polls…If You Want Your Vote to Count! added on Saturday, October 10, 2020