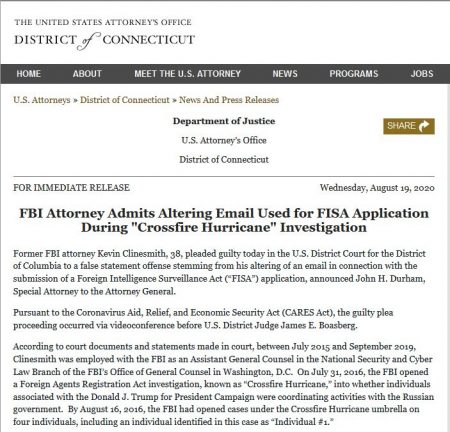 (Oct. 6, 2020) — On Tuesday morning, The Post & Email contacted the office of U.S. Attorney for the District of Connecticut media spokesman, Thomas Carson, through its website, to inquire as to any updates on Durham’s investigation into the origins of “Crossfire Hurricane,” the FBI and later Special-Counsel probe of alleged improper connections between the 2016 Trump campaign and the Kremlin.

Early last year, Durham was tasked by Attorney General William P. Barr with probing the justification for Crossfire given that Special Counsel Robert Mueller’s 19-member team of prosecutors could not substantiate the FBI’s assertions that members of the 2016 Trump campaign were “colluding” with Russians to affect the outcome of the election.

Recent revelations on the part of a number of Republican congressmen indicate that then-Democratic presidential candidate Hillary Clinton conceived of the idea to allege nefarious connections between Trump and Russia in the wake of a document declassified on September 29, 2020 by Director of National Intelligence (DNI) John Ratcliffe to Senate Judiciary Committee Chairman Lindsey Graham (R-SC).

Ratcliffe’s three points summarizing the intelligence he described in his letter are: 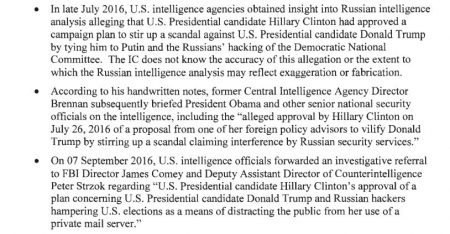 Our question to Carson reads:

Are there any updates on Mr. Durham’s investigation into “Crossfire Hurricane” which can be released publicly at this time? My publication is The Post & Email, an online paper which reports on government corruption.  Thank you.
Sharon Rondeau, Editor
The Post & Email
www.thepostemail.com
P.O. Box 113
Canterbury, CT  06331-0113

And his response to us reads:

This is the one public announcement I can provide:  https://www.justice.gov/usao-ct/pr/fbi-attorney-admits-altering-email-used-fisa-application-during-crossfire-hurricane