(Sep. 19, 2020) — On Friday night the Twitter account @kamalakancel posted images of what it said were four documents appearing to show the immigration history of Shayamala Gopalan Harris, the mother of Democratic vice-presidential candidate and U.S. Senator Kamala D. Harris.

To date, Kamala Harris has not responded to questions about her parents’ citizenship status when she was born in Oakland, CA on October 20, 1964 and, more broadly, whether or not she qualifies to serve as a “natural born Citizen.”

Some interpret the Article II, Section 1, clause 5 requirement for the president and commander-in-chief to signify a person born in the United States without respect to his parents’ citizenship, while others point to the different standard for the nation’s chief executive as opposed to that of “a Citizen” for U.S. senators and representatives set forth in Article I.

While the Constitution is silent on vice-presidential qualifications, the 12th Amendment, ratified June 15, 1804, states in its conclusion:

But no person constitutionally ineligible to the office of President shall be eligible to that of Vice-President of the United States.

Further, Eastman raised the prospect that if Harris’s parents were not “lawful permanent residents” when Kamala was born, then she herself “was not subject to the complete jurisdiction of the United States at birth, but instead owed her allegiance to a foreign power or powers—Jamaica, in the case of her father, and India, in the case of her mother—and was therefore not entitled to birthright citizenship under the 14th Amendment…”

Granted, our government’s view of the Constitution’s citizenship mandate has morphed over the decades to what is now an absolute “birth on the soil no matter the circumstances” view—but that morphing does not appear to have begun until the late 1960s, after Kamala Harris’ birth in 1964. The children born on U.S. soil to guest workers from Mexico during the Roaring 1920s were not viewed as citizens, for example, when, in the wake of the Great Depression, their families were repatriated to Mexico. Nor were the children born on U.S. soil to guest workers in the bracero program of the 1950s and early 1960s deemed citizens when that program ended, and their families emigrated back to their home countries.

So before we so cavalierly accept Senator Harris’ eligibility for the office of vice president, we should ask her a few questions about the status of her parents at the time of her birth.

Were Harris’ parents lawful permanent residents at the time of her birth? If so, then under the actual holding of Wong Kim Ark, she should be deemed a citizen at birth—that is, a natural-born citizen—and hence eligible. Or were they instead, as seems to be the case, merely temporary visitors, perhaps on student visas issued pursuant to Section 101(15)(F) of Title I of the 1952 Immigration Act? If the latter were indeed the case, then derivatively from her parents, Harris was not subject to the complete jurisdiction of the United States at birth, but instead owed her allegiance to a foreign power or powers—Jamaica, in the case of her father, and India, in the case of her mother—and was therefore not entitled to birthright citizenship under the 14th Amendment as originally understood.

Earlier in his term and reiterated last year, President Trump suggested his administration could abolish the practice of awarding “birthright citizenship” to all individuals born on U.S. soil emanating from a longstanding interpretation of the 14th Amendment with very rare exceptions, such as children born to foreign diplomats.

Children born in the U.S. to illegal-alien parents are often referred to as “anchor babies,” as the “birthright citizenship” they receive enables their parents to remain in the United States, apply for U.S. citizenship, and later sponsor relatives from their nations of origin.

The aforementioned Twitter account, which is expressed as “Kancel Kamala” in its header, appears to have been opened in mid-August, with the earliest tweet this writer could locate dated August 13, 2020.  At the time of this writing, the account follows no one and has 22 followers.

In commentary accompanying each of Friday’s tweets containing the images, the account-holder included, “Suggest screen grab while up.” 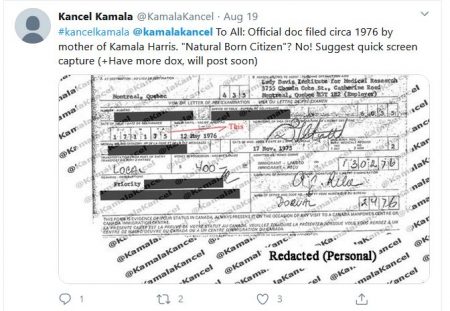 The document image issued with the tweet is titled, “CANADIAN IMMIGRATION IDENTIFICATION RECORD” with the French translation underneath in italics.

Although Kamala Harris has not, to this writer’s knowledge, extensively discussed her formative years or parents’ citizenship in any setting, her Wikipedia biography and Canadian media sources report that she attended school in Montréal, Quebec, Canada from the age of 12 through her presumed high school graduation.

As The Post & Email reported on September 5, Wikipedia recently revised Kamala Harris’s life narrative to say that she moved to Québec with her mother and sister at age 12 rather than at age 7, and that her mother arrived in the U.S. from India in 1958 and not 1960, as the entry had previously stated.

According to Gopalan Harris’s Wikipedia biography, she “conducted research in UC Berkeley’s Department of Zoology and Cancer Research Lab. She worked as a breast cancer researcher at University of Illinois at Urbana-Champaign and University of Wisconsin. She worked for 16 years at Lady Davis Institute for Medical Research and McGill University Faculty of Medicine.”

When enlarging the initial document, one notes on the third line of the form below its title that the question “Citizen of” was responded to with “India.”  An additional marking in red states “This” and is repeated on a subsequent line indicating that Gopalan Harris, if admitted to Canada, would be accompanied by two daughters as well as on what appears to be the application date of “171175.”

The record indicates that as an “immigrant” who would be working at the “Lady Davis Institute for Medical Research” in Montreal, Quebec, Gopalan Harris arrived in Canada on February 13, 1976, when her daughter Kamala would have been approximately 11 years, 5 months old.

The Twitter account issued nothing further until September 7, when it declared, “Reorganizing account this week, no tweets planned at this time until about the 12th-13th. Stay tuned!“

Similarly, the account went dark until Friday night, when it issued four tweets, each with an image concerning Gopalan Harris.

The first image predates the document released on August 19 and indicates that Gopalan Harris completed her Ph.D. in the field of “Nutrition” at the University of California, Berkeley in January 1964, as stated in her Wikipedia entry.  According to the document, Gopalan Harris was seeking a position in which she would perform “Research in Physiology” as a “non-immigrant F-1 student.”  The employment application was signed September 29, 1964, three weeks before Kamala Harris was born. 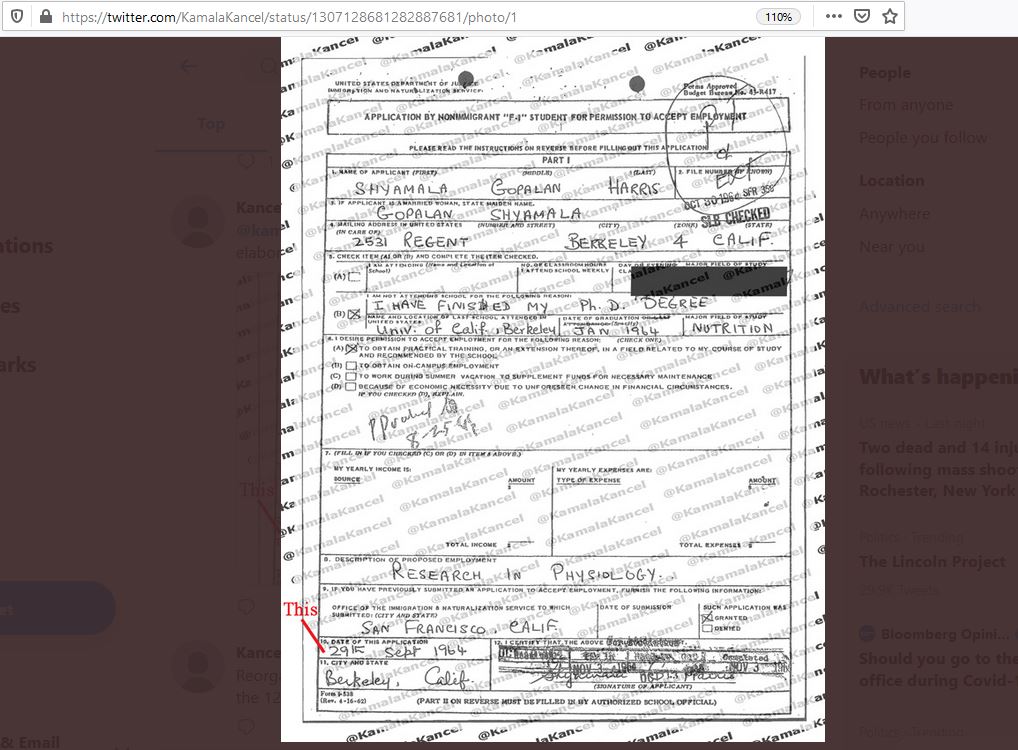 The second document appears to be a continuation of the application pictured above, indicating that Gopalan Harris’s “Employment” was “authorized” by an “Asst. Foreign Student Advisor” at UC Berkeley. 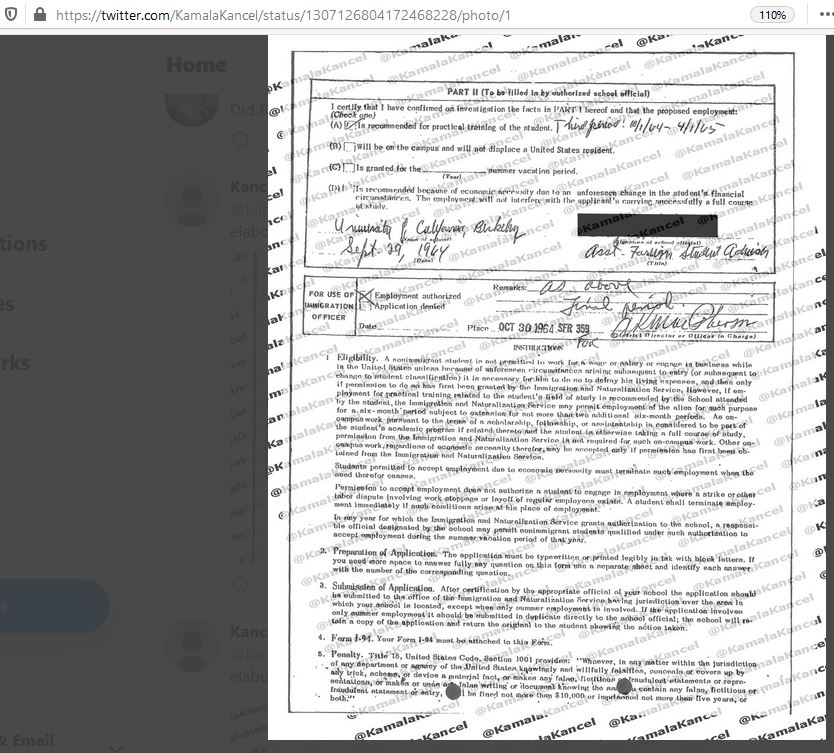 The third of the four documents released Friday, issued by the former Immigration and Naturalization Service (INS), reiterates Gopalan Harris’s “non-immigrant” status and reports that on October 30, 1964, she was granted permission to remain in the U.S. through April 1, 1965. 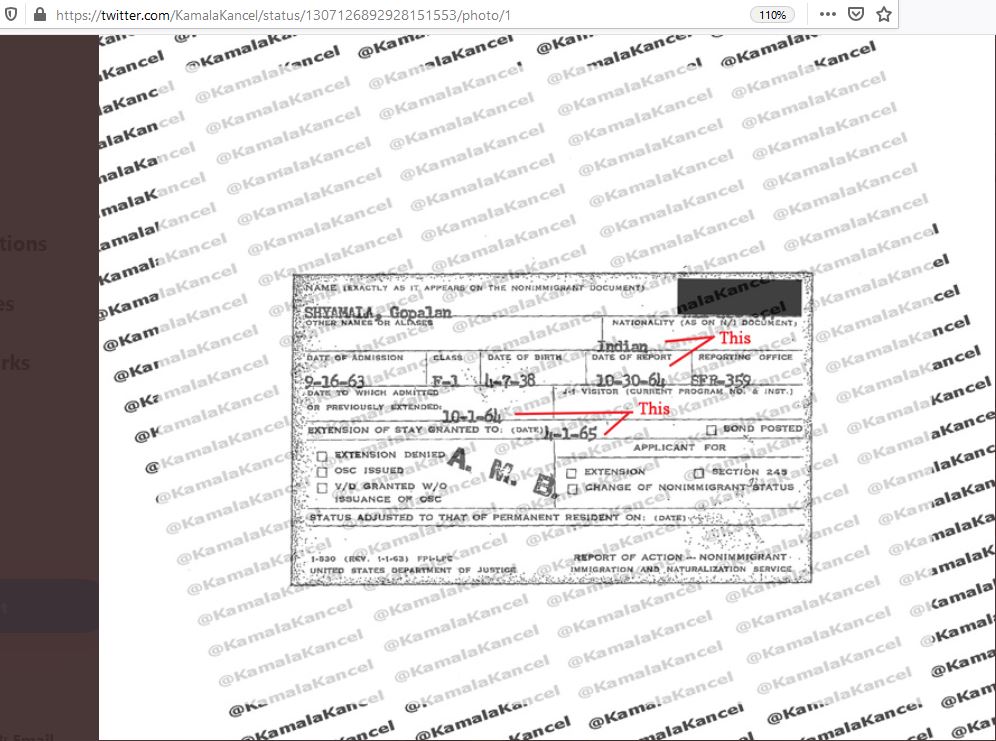 The last of the documents released Friday is dated January 11, 1967 and reveals that in a letter written on University of Illinois stationery, Gopalan Harris was seeking “an immigrant visa” and that her husband, Donald Harris, was applying for “permanent resident status.” 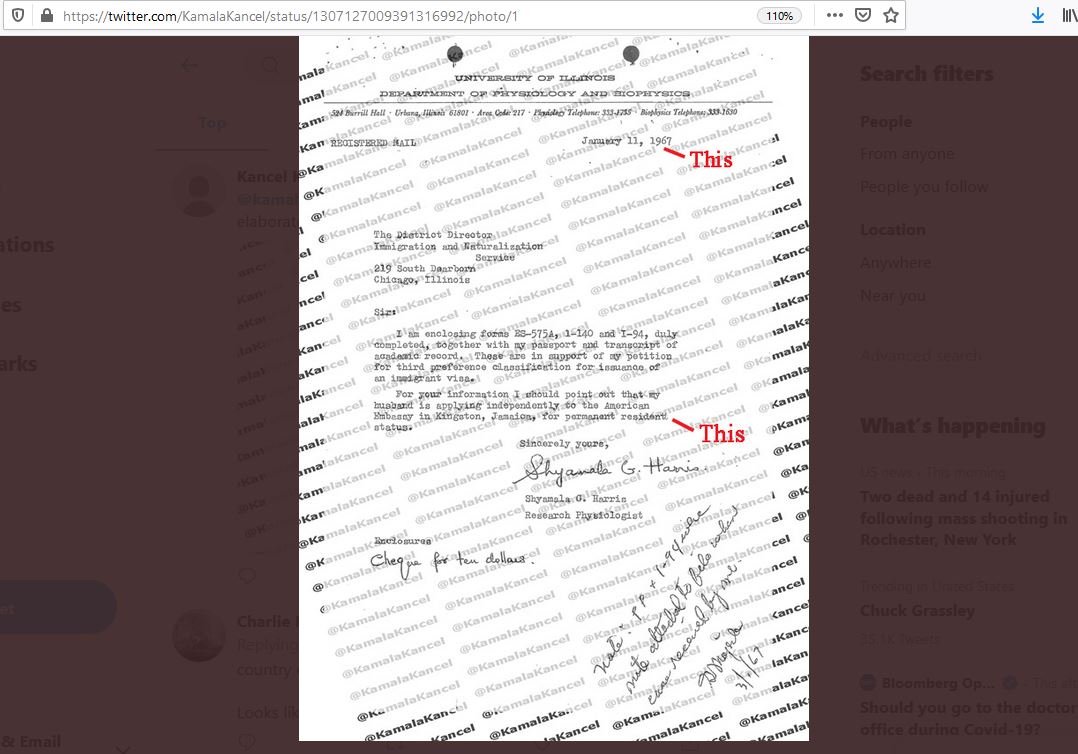 On Saturday afternoon, @kamalakancel tweeted, “Statement text (as a .jpg), which clarifies initial results of research at this time. Additional documents with expansions on these narratives, and more, will be posted here in near future.  @kamalakancel #kancelkamala“.

The attached “Statement” reaches several conclusions, including that Gopalan Harris “exploited” the U.S. immigration system, constituting “a breach of the public’s faith.”  Further, the tweet claims, Gopalan Harris eventually “obtained a separate passport from Canada (while stating she resided in Oakland, CA).”

Of the vice-presidential candidate, @kamalakancel contended:

Kamala declared her US citizenship as being based on “birth in the US” and not “through parents” in a sworn petition.  Could this be interpreted as a legal admission that Kamala Harris is not a “natural born” citizen  of the US (as is required for a Vice-President)?

In his closing paragraph, @kamalakancel wrote, “Legal implications of available records may apply to eligibility for ballots, the Electoral College, and related court filings…” 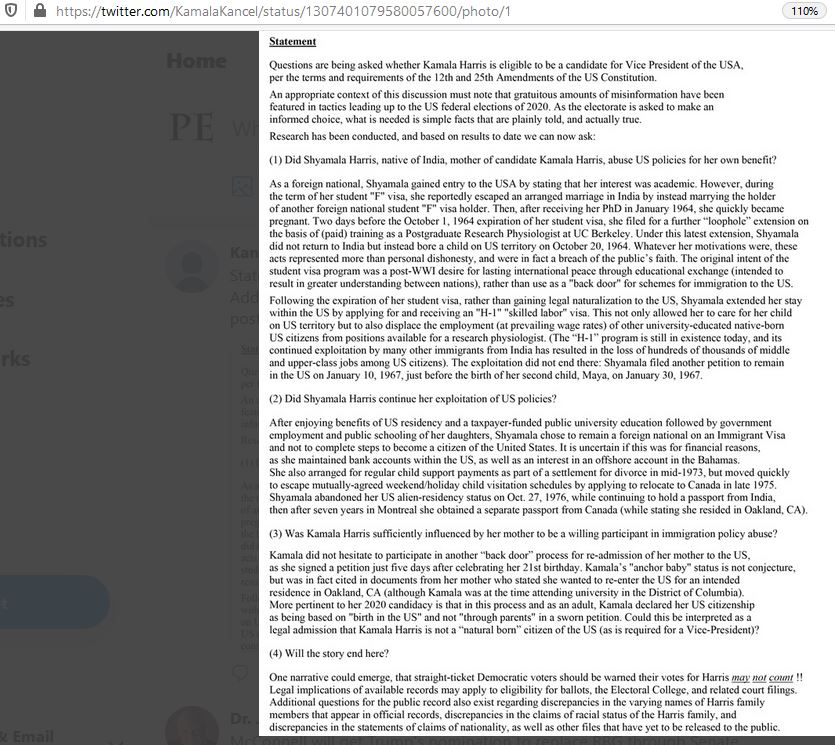 Do These Documents Answer Questions about Kamala Harris’s Eligibility? added on Saturday, September 19, 2020

32 Responses to "Do These Documents Answer Questions about Kamala Harris’s Eligibility?"