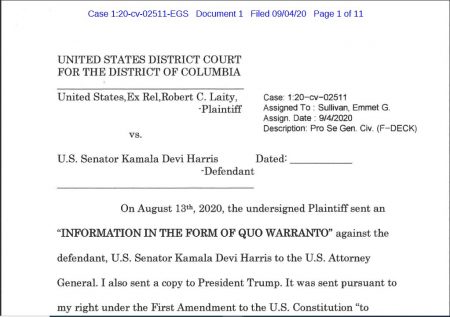 (Sep. 13, 2020) — A lawsuit challenging the constitutional eligibility of U.S. Sen. Kamala Harris to serve as vice president is now docketed at the U.S. District Court for the District of Columbia.

The cover sheet, consisting of two pages and completed on August 31, indicates that Laity cited as the suit’s “Cause of Action,” “Article II, Sec. 1, Clause 5 & 12th Amendment, USConst. requires a President and VP to be ‘Natural Born Citizens'”.

Page 4 of the suit states that the definition of “natural born Citizen” is “born in the United States to parents who were both U.S. Citizens themselves.”

Laity noted the matter to be one of “civil rights” associated with “Voting” and did not request a jury trial.  Page 2 claims that Harris is “attempting to usurp the Vice-Presidency and/or the Presidency of the United States, by fraud, during a time when this nation is at war with other nations.” 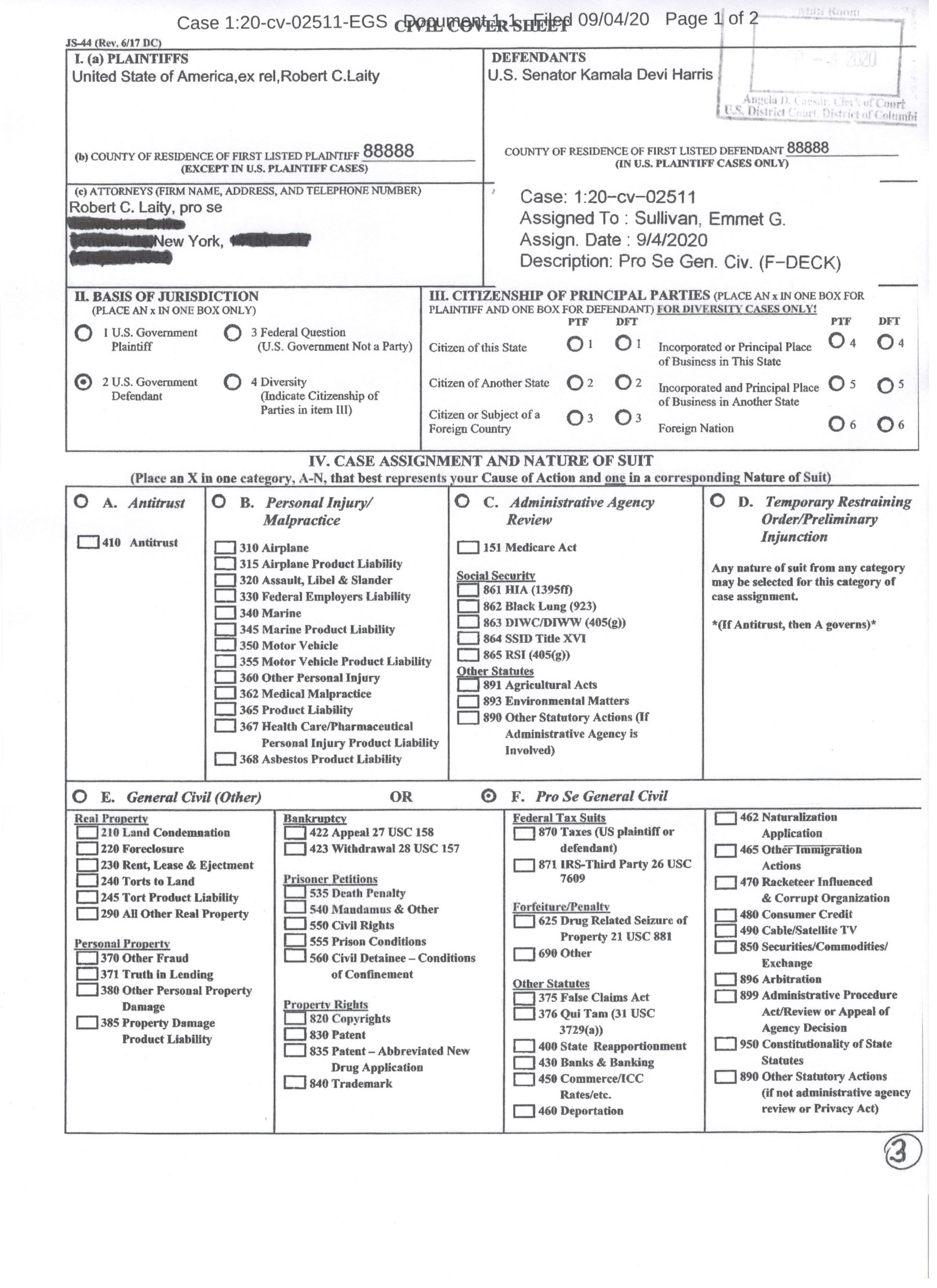 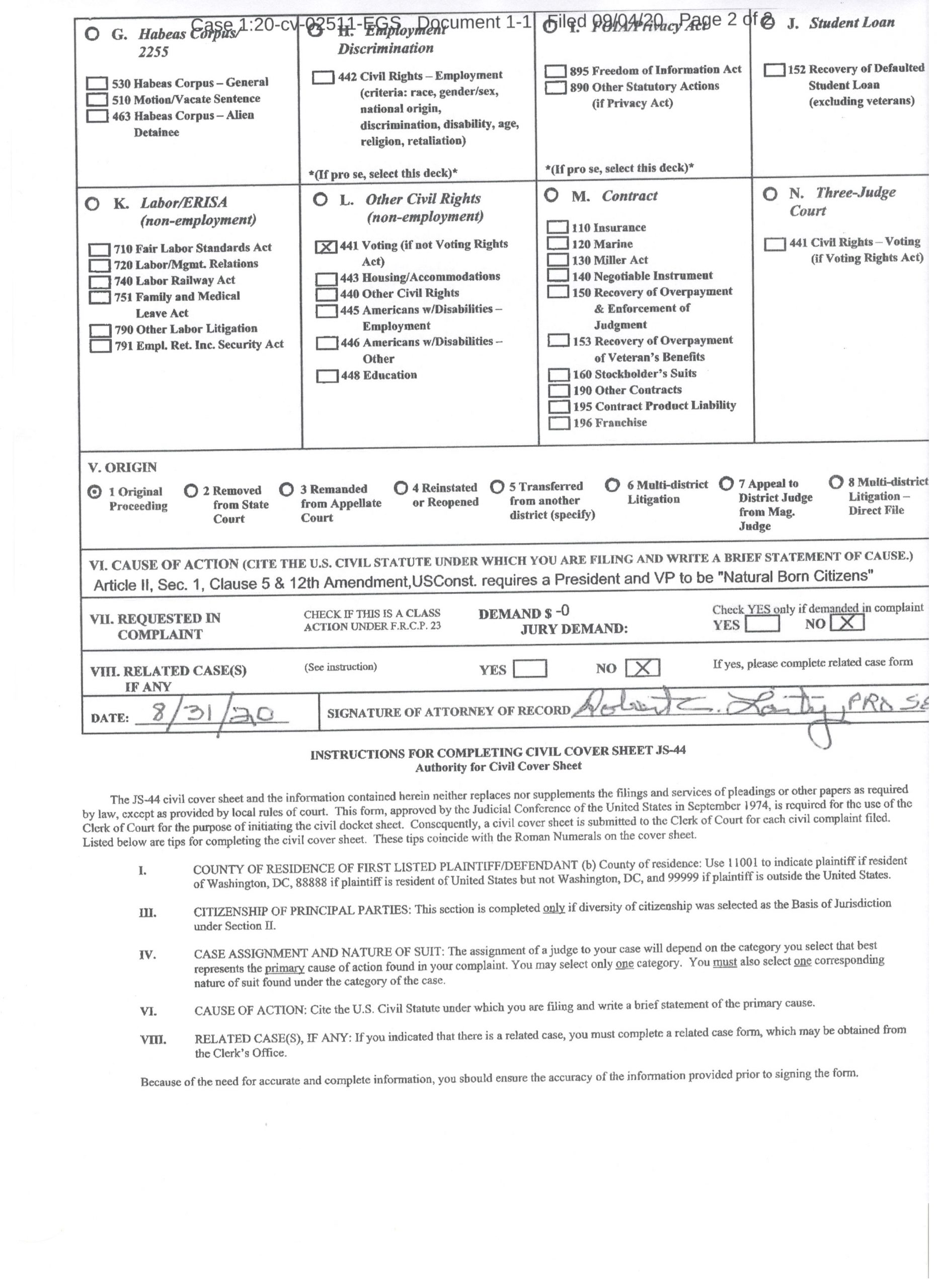 …But no person constitutionally ineligible to the office of President shall be eligible to that of Vice-President of the United States.

In an email Sunday morning, Laity told The Post & Email, “I spoke with the Clerk of the Court on Friday.  I am arranging for service of the Summons and Complaint on Senator Kamala Harris, AGUS William Barr and Michael R. Sherwin, U.S. Attorney for D.C. as required by law.  They will then have (60) days to Answer the Complaint.”

Shortly after her nomination was announced by Democratic presidential candidate Joe Biden last month, Harris’s eligibility as a “natural born Citizen” was challenged publicly, including in at least one mainstream publication.  The question arises, wrote Chapman University Professor of Law John Eastman at Newsweek, from the fact that Harris’s parents may not have been “subject to the jurisdiction” of the United States when she was born in Oakland, CA on October 20, 1964 given their respective foreign citizenship at the time. Some in the media reacted by attempting to portray questions about Harris’s constitutional eligibility as a “racist birther conspiracy,” while others declared Harris unequivocally eligible.

While the Framers mandated that the president and commander-in-chief be a “natural born Citizen,” they did not define the term. Historical references in the Congressional Globe and at least four U.S. Supreme Court cases, including Minor v. Happersett cited by Laity on page 3 of the complaint, indicate that a person born in the country to parents owing no other allegiance than to the United States was “no doubt” a natural born Citizen, while as to those born within the United States to non-citizen parents, there remained uncertainty.

In January of last year, Harris announced her presidential candidacy but withdrew from the race at the end of the year, citing a lack of funds. On the September 13, 2020 edition of “Sunday Morning Futures,” Rep. Devin Nunes (R-CA22) claimed that Harris was Barack Hussein Obama’s choice for the Democratic presidential nominee, a preference carrying over to Biden’s nomination of her as his running mate on August 11.

Nunes further said that should Biden, who many believe has been exhibiting signs of cognitive decline, be unable to finish his first term if elected, Harris would become the next President of the United States.

Like Harris, Obama’s eligibility to serve as president was questioned beginning in 2007 when credible media reports stated that he was born in Indonesia or Kenya and not Hawaii, as he claimed. In 2012, as Obama sought reelection, Breitbart News located a 1991 promotional brochure produced by his then-literary agent stating that Obama was “born in Kenya and raised in Indonesia and Hawaii.”

The biography, which stood unchanged for approximately 16 years, was altered in 2007, shortly after he declared himself a presidential candidate, to say that Obama was “born in Hawaii.”

There remains doubt as to Obama’s eligibility given that his claimed father was never a U.S. citizen as well as the fact that a 5+-year criminal investigation determined his “long-form” birth certificate, purportedly held by the State of Hawaii and released publicly on April 27, 2011, is a “computer-generated forgery.”

Neither Congress nor the U.S. Justice Department has addressed the claims generated from the probe, which was conducted by former police detective and private investigator Mike Zullo under the authority of the Maricopa County, AZ Sheriff’s Office (MCSO).

According to Zullo in August 2018, citing two U.S. intelligence agents, “It’s been an open secret” in Washington, DC that Obama could never satisfy the constitutional requirement of being born on American soil.”

In April 2008, the U.S. Senate passed Resolution 511, with Obama and then-Democratic presidential contender Sen. Hillary Clinton voting in favor, stating that Republican presidential candidate John McCain was a natural born Citizen.  McCain was born outside of the United States to two U.S.-citizen parents, one of whom was an admiral in the Navy stationed in Panama.

In 2015, days after Texas Sen. Ted Cruz (R) announced he would seek the presidency, former Solicitors General Neal Katyal and Paul Clement published an essay in the Harvard Law Review claiming that, although born in Canada to a non-U.S. citizen father, Cruz was a “natural born Citizen” of of the United States by virtue of his mother’s American citizenship.  The year prior, Cruz renounced the Canadian citizenship bestowed upon him at birth after claiming to have been unaware of it.

Harris’s Senate office did not respond to questions from constituent Gary Wilmott nor to those posed by this publication when asked in 2017 and 2018, respectively, about her parents’ citizenship status as rumors about her plans to seek the presidency swirled world in various political circles.

Despite a number of lawsuits reaching its chambers during the last 12 years, the U.S. Supreme Court has declined to rule on the meaning of “natural born Citizen.”  According to Associate Justice Clarence Thomas in 2010, the high court was “evading the issue.” 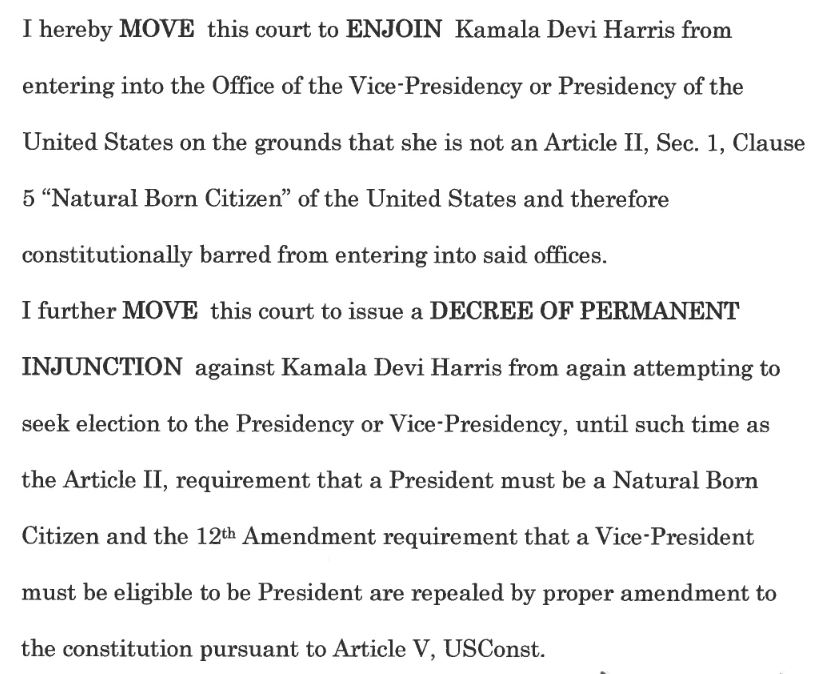