“IT WILL NEVER HAPPEN” 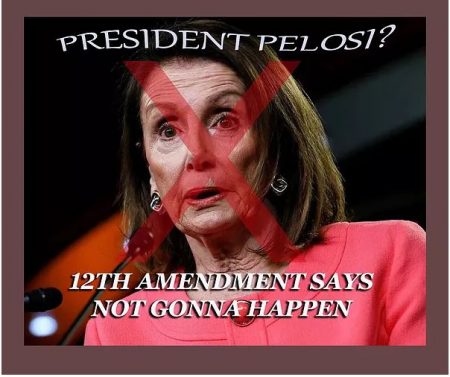 (Sep. 9, 2020) — Many of you have been warned that if Donald Trump does not receive 271 Electoral College votes as of March 4th, 2021, Pelosi will be appointed to serve as interim President. That, my friends, is not true and it will never happen.

While the 12th Amendment minimally changes the requirements of Article II, Section 1 of the Constitution, it is, for the most part, clarification. It does, however, clearly state that a person who is not a Natural Born Citizen cannot be elected as Vice President. But that is another issue that must be addressed as relates to Kamala Harris.

The actual wording of the 12th is shown below in italics, and a description of what each applicable sentence means follows in red.

The Electors shall meet in their respective states, and vote by ballot for President and Vice-President, one of whom, at least, shall not be an inhabitant of the same state with themselves; they shall name in their ballots the person voted for as President, and in distinct ballots the person voted for as Vice-President, and they shall make distinct lists of all persons voted for as President, and of all persons voted for as Vice-President, and of the number of votes for each, which lists they shall sign and certify, and transmit sealed to the seat of the government of the United States, directed to the President of the Senate;–The President of the Senate shall, in the presence of the Senate and House of Representatives, open all the certificates and the votes shall then be counted;–The person having the greatest number of votes for President, shall be the President, if such number be a majority of the whole number of Electors appointed;<Note: here the number of Elector votes does not have to be 271, but a majority of Electors appointed. If a state fails to appoint its Electors as some liberal states have threatened, the number required for a majority drops consistent with the number of Electors not certified. This means that 271 votes may not be required.> and if no person have such majority, then from the persons having the highest numbers not exceeding three on the list of those voted for as President, the House of Representatives shall choose immediately, by ballot, the President. <Note: the House must choose the President from the list of candidates. Nancy will not be on that list.> But in choosing the President, the votes shall be taken by states, the representation from each state having one vote; a quorum for this purpose shall consist of a member or members from two-thirds of the states, and a majority of all the states shall be necessary to a choice. Note: the full House will not make this choice but it will be made by a majority of single votes from each state. Each state will choose by 2/3 majority whom it will vote for. This will swing the vote to the party that controls most state legislatures and will have nothing to do with what party controls the House.> [And if the House of Representatives shall not choose a President whenever the right of choice shall devolve upon them, before the fourth day of March next following, then the Vice-President shall act as President, as in the case of the death or other constitutional disability of the President. <Note: This means that the sitting Vice President, in this case Mike Pence, will serve as President until such time as a President can be determined.>–] The person having the greatest number of votes as Vice-President, shall be the Vice-President, if such number be a majority of the whole number of Electors appointed, and if no person have a majority, then from the two highest numbers on the list, the Senate shall choose the Vice-President; a quorum for the purpose shall consist of two-thirds of the whole number of Senators, and a majority of the whole number shall be necessary to a choice. <Note: The US Senate, in this case, is controlled by the Republicans and only a majority will be needed to appoint Pence to serve in the interim.>  But no person constitutionally ineligible to the office of President shall be eligible to that of Vice-President of the United States. Note: This last line precludes Kamala Harris from being eligible for the Vice Presidency since neither of her parents were citizens at the time of her birth.

To summarize the 12th Amendment; any shenanigans that the Demonrats try to pull relating to not supplying Elector votes or delaying the total vote count will not get any Democrat into the White House.

The 12th Amendment Protects Us from Pelosi added on Wednesday, September 9, 2020

6 Responses to "The 12th Amendment Protects Us from Pelosi"