Will The Bureaucracy Be The Downfall of American Freedom? 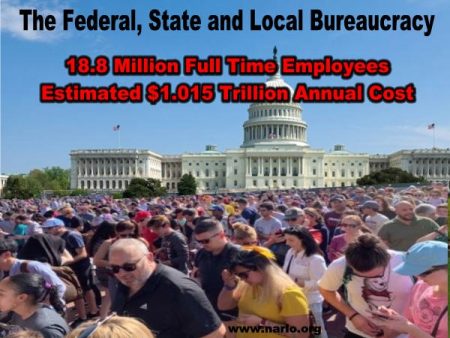 (Sep. 6, 2020) — “One of the greatest threats to mankind today is that the world may be choked by an explosively pervading but well camouflaged bureaucracy.” — Norman Borlaug, (1914 to 2009) An international agronomist

Most Americans have no idea as to the scope and power of the federal, state and local bureaucracies.  Although all bureaucracies grow by their vary nature, local government has grown the most.  From 1990 to 2010 federal government employment stayed relatively steady.  In the same period, state government has grown by about 1,000,000 employees, or a growth rate of almost 24%.  Local government, on the other hand, has grown by 3,700,000 employees, or a whopping 34.3%.  The growth rate is directly related to the passage of more laws and the explosive growth in social services.

In the Open the Books Oversight Report entitled “Mapping the Swamp” that analyzed federal employment in 2016, the following observations were made:

But bureaucratic wages are not the real story.  The real story is buried in just how much power federal, state and local bureaucracies have in passing laws and shaping public policy.  The answer is disturbing.

The first thing to remember is that most, if not all, government employees are products of the liberal college system.  When they enter employment with the government they already have a built-in, left-leaning bias.  It is from that left-of-center prism that they conduct the business of their particular agency.  Many times that bias interferes and obstructs the wishes and mandates of our elected representatives.  The federal bureaucracy has worked against Trump and his policies since he was inaugurated in 2017.

Although this is not a new phenomenon, it has grown more pronounced in the last several decades as the gap between conservatism and liberalism continues to widen.  From this, the DEEP STATE was born.

The second thing to remember is that 36.1% of state and local government workers are represented by unions.  In contrast, only 6.5% of private workers are represented by unions.  This union representation gives government workers exceptional bargaining power in setting salaries and benefits.  In fact, it gives these unions the power to blackmail the taxpayer for greater wages and benefits by threatening to strike if their demands are not met.  As a result government employee pensions funds are criminally under-funded.  Since almost every American is required to do business with government employees, the average American is held hostage by government employee union demands.

In late May of 2020 a black man was killed by a white policeman in Minneapolis, Minnesota and the nation exploded in violence, rioting, looting and arson.  The term “Black Lives Matter” (BLM) became a rallying cry for the millennials (the 18-to-34 crowd) and these young and dumb kids took to the streets in large protests and destruction of lives and property in major cities across America.  Suddenly “Black Lives Matter” and “white privilege” blossomed into a full-fledged religious cult that now infects our everyday lives, including our institutions and corporate boardrooms.

Corporations, in a gushing display of guilt and protectionism, donate huge amounts of cash to “Black Lives Matter” and similar organizations.

Democrat politicians start donating to the rioters through their surrogates, the “Black Lives Matter” organization, the Black Business Collective and “Claim the Block” group.

Fringe socialist organizations plan new curricula for public schools to teach kids that America is a racist country but only white Americans are racist.  The New York Times’s “1619 Project” was designed to do just that.  “1619” refers to the year that black slaves were allegedly introduced to the North American continent.

Attempts to rub out American history are made by tearing down statues in cities nationwide.  Textbooks are being revised to fit the “Black Lives Matter” narrative.  Our kids are being brainwashed in our public schools in liberal ideology and systemic racism and have been for several decades.  Common Core State Standards was just an extension of this social-justice brainwashing.  Public schools have become institutions of indoctrination, not objective learning centers.  But then why not: most of our teachers are also products of liberal colleges.

Socialist Democrat mayors and governors show their sympathy for BLM by looking the other way when rioting, looting and arson are taking place.  They tell the police to stand down and won’t authorize the use of the National Guard.  As a result, the violence grows and grows.  Some mayors are allowing “Black Lives Matter” to be painted on city streets with taxpayer-funded paint and labor, in direct violation of the Hatch Act.

But worse than all that, the entire local, state and federal bureaucracy are forcing white government employees into cult indoctrination, re-education seminars to re-train the “White Privilege” out of them.  These re-education seminars are being forced on white employees only under what is called “Critical Race Theory,” or CRT.  It is being introduced to public education all across America as well.  The following is an abstract of CRT.   It should turn your stomach.

“The emergence of Critical Race Theory marked an important point in the history of racial politics in the legal academy and the broader conversation about race and racism in the United States. More recently, CRT has proven an important analytic tool in the field of education, offering critical perspectives on race, and the causes, consequences and manifestations of race, racism, inequity, and the dynamics of power and privilege in schooling. This groundbreaking anthology is the first to pull together both the foundational writings in the field and more recent scholarship on the cultural and racial politics of schooling. A comprehensive introduction provides an overview of the history and tenets of CRT in education. Each section then seeks to explicate ideological contestation of race in education and to create new, alternative accounts. In so doing, this landmark publication not only documents the progress to date of the CRT movement, it acts to further spur developments in education.”

Christopher Rufo, adjunct fellow at the Pacific Research Institute, told Tucker Carlson the other night on Tucker’s nationwide broadcast that:

Rufo claimed the Treasury Department recently hired a diversity trainer who said the U.S. was a fundamentally white supremacist country and that white people upheld the system of racism in the nation. In another case, Sandia National Laboratories, which designs nuclear weapons, sent its white male executives to a mandatory training in which they, according to Rufo, wrote letters apologizing to women and people of color.  The matter is so serious, Rufo added, that Trump should immediately issue an executive order and stamp out this destructive, divisive, pseudoscientific ideology at its root.

Evidently, Trump got the message and has directed the Office of Management and Budget to crack down on federal agency anti-racism training, calling it “divisive and anti-American propaganda.”

What happens when an idea, or an ideology, infiltrates the huge power base that is the government bureaucracy?  What happens is that all decisions made by that bureaucracy are “colored’ by that idea or ideology.  Black Lives Matter becomes a battle cry and a religious hymn.  White people are racists and therefore bad and must be re-trained.  The idea or ideology blossoms into full-fledged mass hysteria, purposely manufactured by one party for purely political gain.

What does this sound like?  It sounds like what the Chinese Communist Party is doing to the Uighur Muslims in western China, without the concentration camp barracks and barbed wire.  The Uighurs are being forced into labor camps where they are required to listen to lectures and sing hymns praising the Chinese Communist Party.   What is difficult to understand is why white Americans, who are being subjected to this nonsense (de-programming) don’t get up and walk out of these seminars?

All this Black Lives Matter and White Privilege hysteria eerily parallels the insanity of the Salem Witch Trials of 1692 and 1693.  In colonial Massachusetts, adolescent girls Abigail Williams, Betty Parris, Ann Putnam, Jr., and Elizabeth Hubbard began to have fits that were described by a minister as “beyond the power of Epileptic Fits or natural disease to effect.“  The events resulted in the Salem witch trials, a series of hearings, which resulted in the execution of 20 citizens and the death of five other citizens of Salem Village, Massachusetts (present day Danvers, Massachusetts) and nearby towns who were accused of practicing witchcraft.  The episode is one of America’s most notorious cases of mass hysteria, and it has been used in political rhetoric and popular literature as a vivid cautionary tale about the dangers of isolationism, religious extremism, false accusations and lapses in due process.  (Source: Wikipedia)

Whether it is pitted windshields, Salem witch trials, Critical Race Theory, White Privilege, or Black Lives Matter, if these mass hysteria diseases infect government bureaucracies and our educational institutions and are allowed to metastasize within the system, the future of a free America is in grave doubt.  Will the bureaucracy be the downfall of American freedom?  That depends on whether good people will rise up en masse and purge America of suicidal ideologies and reclaim individual freedom and unalienable rights …. no matter what the cost. The German people DIDN’T, and 50,000,000 people died needlessly!  Will Americans follow suit?

We will conclude with this small tidbit of statistics.  It took less than 3% of the population to win America’s Revolutionary War.  The current government bureaucracy, at all levels, represents 5.6% of the total population.

Will The Bureaucracy Be The Downfall of American Freedom? added on Sunday, September 6, 2020

One Response to "Will The Bureaucracy Be The Downfall of American Freedom?"