WHAT DO FACEBOOK AND ITS “FACT-CHECKERS” KNOW ABOUT THE CONSTITUTION AND ITS AMENDMENTS? 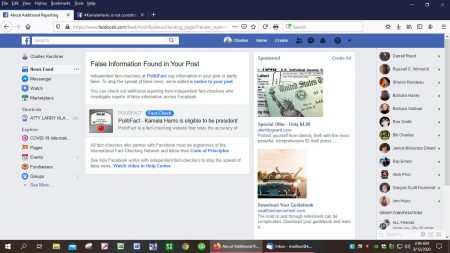 As do many others, Kerchner contends that Sen. Kamala Harris (D-CA), selected to run as Joe Biden’s vice-presidential candidate, is not a “natural born Citizen” as required by Article II of the U.S. Constitution for the presidency and by the 12th Amendment for anyone contemplating serving as vice president.

Harris was born in Oakland, CA in 1964 to an Indian-citizen mother and Jamaican-citizen father, neither of whom had lived in the U.S. for sufficient time to apply for citizenship.  Some argue that by the circumstances of her birth, Harris is an “anchor baby,” while others say she is a 14th-Amendment “citizen” but not one who can be considered “natural born,” with undivided allegiance to the United States.

After initially attending local schools, Harris’s mother relocated her two daughters to Montreal, Quebec to continue her work in cancer research, and Harris attended schools there through high-school graduation.

By following the link provided in Facebook’s notice placed on Kerchner’s post, one reaches Facebook’s statement on “how Facebook [is] addressing false news through third-party fact-checkers”.

“We’re committed to fighting the spread of false news on Facebook,” the policy reads. “We use both technology and human review to remove fake accounts, promote news literacy and disrupt the financial incentives of spammers. In certain countries, we also work with third-party fact-checkers who are certified through the non-partisan International Fact-Checking Network to help identify and review false news.”

One source Facebook provided for its “fact-checking” of Kerchner’s post is USA Today, whose August 11/12 article on the subject is titled, “Fact check: Kamala Harris is a natural-born U.S. citizen and eligible to serve as president.”

The article cites another Facebook post which is no longer available as inaccurate.  “The post has been shared almost 2,000 times since Aug. 2. USA TODAY reached out to Drew Sciuridae, who made the post, for comment,” the paper reported.  Whether or not Sciuridae responded is not divulged.

The article states that Harris is both a “citizen” and “natural born Citizen,” a differentiation made in the U.S. Constitution in the requirements between those serving in the U.S. House of Representatives and Senate and the presidency.  While naturalization citizens were deemed eligible for the former under certain conditions, Article II, Section 1, clause 5 of the Constitution requires the president and commander-in-chief to be a “natural born Citizen,” to have resided in the country 14 years or more, and to be at least 35 years of age, exceeding the respective age requirements of senators and representatives set forth in Article I.

The USA Today column fails to cite any of the constitutional scholars who contend that the citizenship of a presidential or vice-presidential candidate’s parents is equally, if not more, important as the candidate’s place of birth in determining whether or not he or she is “natural born.”  Moreover, the writer did not invoke the fact that in 2015 and 2016, Sen. Ted Cruz (R-TX) claimed to possess “natural born” citizenship, with the support of two former solicitors general, even though he was indisputably born in Canada.

The second source to which Facebook linked responsive to Kerchner’s post is “leadstories,” which asserts, in regard to “natural born Citizen”:

The article then quotes from the 14th Amendment, which refers to “citizens” and not “natural born Citizens.”  It makes no mention of the statement by Rep. John Bingham, considered the author of the amendment, that, “Every human being born within the jurisdiction of the United States of parents not owing allegiance to any foreign sovereignty is, in the language of your Constitution itself, a natural born citizen.“

Over the years, Facebook has notably changed its function from that of a social-media platform with legal protections under Section 230 of the 1996 Communications Decency Act (CDA) to a publisher which curates, evaluates and removes content based on its own criteria. However, Facebook co-founder and CEO Mark Zuckerberg testified to a House committee that Facebook is “a technology company because the primary thing that we do is have engineers who write code and build product and services for other people.”

On May 28, President Trump issued an executive order with the purpose of “preventing online censorship” which begins:

Free speech is the bedrock of American democracy. Our Founding Fathers protected this sacred right with the First Amendment to the Constitution. The freedom to express and debate ideas is the foundation for all of our rights as a free people.

The order directs the Federal Trade Commission (FTC) to review reports of online censorship and “consider whether complaints allege violations of law that implicate the policies set forth in section 4(a) of this order. The FTC shall consider developing a report describing such complaints and making the report publicly available, consistent with applicable law.”  In turn, the Justice Department was directed to “establish a working group regarding the potential enforcement of State statutes that prohibit online platforms from engaging in unfair or deceptive acts or practices.”

“Trump issued an executive order in May against social media companies in an attempt to regulate platforms where he has been criticized, just days after Twitter took the rare step of fact-checking one of his tweets about mail-in voting,” Reuters reported Wednesday. “Trump threatened to scrap or weaken a law known as Section 230, which protects internet companies from litigation over content posted by users.”

CDT, a technology company “funded by Facebook Inc, Alphabet Inc’s Google and Twitter Inc.,” according to the same article, filed suit in June against the executive order.

On Wednesday, the Justice Department filed a motion with the court for a dismissal of the case on the grounds that “The EO challenged here imposes no obligations on any private party,” Reuters wrote.  Conversely, CDT’s counsel commented, “Instead of actually trying to address the merits of the issues, and to engage in litigation that will show the severe constitutional deformities of the executive order, it is resorting to legal maneuvering,”

On August 4, after Twitter, Facebook and YouTube removed a video of “America’s Frontline Doctors” promoting hydroxychloroquine as a possible treatment for coronavirus and criticizing certain aspects of the U.S. response to the pandemic, Vice President Mike Pence told Breitbart’s Alex Marlow, “We’re going to do our very best every day between now and election day and for four more years after that to make sure that we preserve the freedom of speech and freedom of the press on the Internet.”

Following a report released last year authored by former Republican U.S. Senator John Kyl and the law firm Covington & Burling, Facebook said it would take steps to combat the perception of left-leaning bias.  Such measures included “the creation of an oversight board for content decisions, the hiring of staffers to work with right-of-center organizations and leaders, and the introduction of an appeals process for content removed for violating the company’s community standards,” The Washington Post reported last August 20.