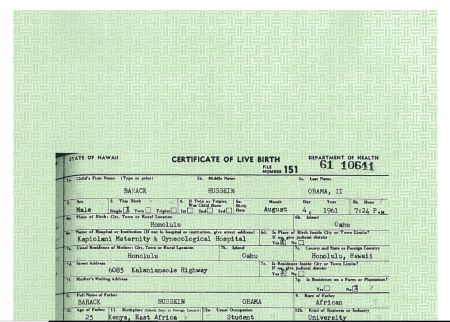 (Jul. 2, 2020) — [Editor’s Note: The following was sent Thursday morning to numerous members of the media, Attorney General William Barr and other Justice Department officials, and members of Congress.]

a)  Why do many of you like to refer to “Barack Obama” as our country’s “first African American” President?  When, in fact, his ethnicity is by far more Arab American (44%) than African American (only 6%).  And, too, “Obama” was not even a real president, because he was not constitutionally eligible to run for or become elected president (not a natural born American citizen per Article 2, Section 1, Clause 5 of our constitution).

b)  Shouldn’t We, The People, know this fact about “Obama?”  Wouldn’t it tend to relieve or possibly even nullify the accusations of racism which are dividing our country today?

c)  Regardless, isn’t all of this misinformation “Obama’s” own fault?

d)  Why doesn’t he come forward and share the truth about his background with the American people at this critical time in our country’s history?  Is he a uniter or a divider?

e)  If “Obama” was truly born in the United States (he claims Hawaii), then why would he need a forged birth certificate and other fraudulent identification?  That is to say, isn’t he actually an undocumented person and why would we elect such a person president?

f)  What exact role was played by the CIA in the choosing, grooming, funding, and gaining of access of “Obama” to our country’s general election process?”

g)  While we are at it, what part did Nancy Pelosi, who was Speaker of the House and  Democrat National Committee Chairperson in 2007-08, play in this election fraud?

h)  Are you aware that two separate citizens’ juries found “Obama” guilty of sedition and election fraud (one of the juries sentenced “Obama” in absentia to ten years in prison)?

i)  Isn’t today’s civil unrest in our country partly due to the upcoming general election and the fear that if Donald Trump is re-elected, he would be politically free to expose “Obama” and his co-conspirators?

j)  Why is it that some people, including Rush Limbaugh and William Barr, are saying that past presidents should not be punished for violating the law?  What if the violation was stealing the presidency and command of our country’s armed forces when not constitutionally eligible, i.e. treason?

k)  Do you believe, as some have articulated, that journalism is dead?  That the news media has abandoned its duty to be a “4th Estate” government watchdog on the people’s behalf?

l)  Because the news media withheld much of the truth about the lawlessness taking place in the “Obama” administration between 2008 and 2016, aren’t they blameworthy to a great degree for the problems which have resulted and are threatening our society today?  Shouldn’t these problems already have been addressed and taken care of years ago?

m)  Shouldn’t our country’s historical record be cleansed of all of the cover-ups and lies, and be corrected to reveal the TRUTH?

n)  Isn’t FOX NEWS (Faux News) as guilty as any of the other so-called news organizations and networks?  Or, to be accurate, more guilty because they have always had the best talent and programming, and should have known better!

o)  Are there any words sufficient to describe the guilt of Congress, the FBI, the CIA, the U.S. Supreme Court, and other unprincipled individuals and entities in our federal government?

p)  Have you been ignored, accused of being a traitor, subjected to nonresponsive government communications, and, for all practical purposes, disenfranchised?

q)  Is all of this really the way a constitutional democratic republic should work?  A system of law and order in which no one – and I mean no one – is above the law?  Where everyone regardless of race, creed, or religion is equal?

Uncomfortable Questions that Need to be Answered… added on Thursday, July 2, 2020

4 Responses to "Uncomfortable Questions that Need to be Answered…"