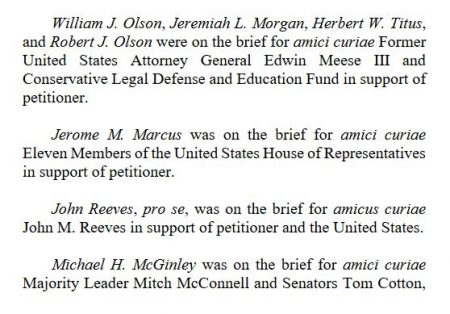 (Jun. 24, 2020) — Page 2 of the opinion issued Wednesday morning by an appellate panel of the United States Court of Appeals for the District of Columbia Circuit indicates that an attorney who in 2011 provided his insights on the presidential-eligibility requirement of “natural born Citizen” filed a friend of the court brief in support of the petitioner, Lt. Gen. Michael T. Flynn (Ret).

Flynn served as Obama’s director of the Defense Intelligence Agency (DIA) and was terminated in 2014.  In late 2016, after winning the presidential election, Donald Trump announced Flynn as his choice for national-security adviser.

Three weeks into his new position, Flynn was forced to resign when his leaked conversations with then-Russian Ambassador Sergey Kislyak appeared to contradict his assertions to then-Vice-President-Elect Mike Pence that he did not discuss U.S.-Russia sanctions during the transition period.

Flynn was prosecuted for allegedly lying to the FBI when two of its agents questioned him during an impromptu meeting in the West Wing on the third full day of the administration.  Initially pleading “guilty” on two occasions, in late January with new counsel, Flynn filed a motion to withdraw the plea as new information sought by his new attorney, Sidney Powell, demonstrated that exculpatory information had been withheld by the government.

In May, following an independent investigation into Flynn’s case by U.S. Attorney for the Eastern District of Missouri Jeffrey Jensen, the Justice Department filed a motion to withdraw the charge.  Rather than agreeing to dismiss, U.S. District Court Emmet G. Sullivan, who had unexpectedly accused Flynn of “treason” in open court in December 2018, sought to investigate the Justice Department’s motives in seeking to abandon its prosecution.

After Sullivan announced his intention to investigate, Flynn’s attorneys requested a Writ of Mandamus from the appellate court ordering Sullivan to abandon his mission although, according to Sullivan’s attorney, Beth Wilkinson, Sullivan might have agreed to dismiss the case on his own following a scheduled July 16 hearing.

In their opinion issued Wednesday morning, appellate court Judges Neomi Rao and Karen Henderson wrote that Sullivan would be exercising “a judicial usurpation of power” (p. 31) by insisting on a review of the Justice Department’s decision to withdraw its charge, with Judge Robert Wilkins dissenting.

On June 1, the William J. Olson law firm of Vienna, VA announced its filing of anamicus brief in support of former Attorney General Edwin Meese, III and the Conservative Legal Defense and Education Fund in favor of “the dismissal of criminal charges against General Michael Flynn” with a link to the brief itself, which numbers 23 pages.

One of the brief’s authors, former “constitutional and common” law professor, former “Special Assistant United States Attorney” and former dean of the college of law and government at Regent University Herbert W. (Herb) Titus, is also the author of a YouTube discussion on the “natural born Citizen” question as it relates to Obama.

On June 10, the Olson firm posted a notice of its filing of a second amicus in the Flynn case, stating:

In May 2011, shortly after the release of an image on the White House website purported to represent Barack Obama’s “long-form” birth certificate, Titus released two videos titled, “Natural Born Citizen?”  The videos appear under the banner, “The American View,” whose namesake website states, “Make The Constitution Matter Again” and invite the reader to “Join our mission to restore the Constitutional Republic through grassroots education” via a subscription.

The image presented as representative of Obama’s original birth record from the Hawaii Department of Health states that “Barack Hussein Obama II” was born on August 4, 1961 at the Kapiolani Maternity & Gynecological in Honolulu to parents Stanley Ann Dunham and Barack Hussein Obama of “Kenya, East Africa.”

At the time Titus produced the videos, the five-year investigation into the image commissioned by the Maricopa County, AZ Sheriff’s Office (MCSO) which found the birth-certificate image to be fraudulent had not yet commenced.

Titus opened Part 1 of the mini-series with, “The question of Obama’s birth, where he was born, is an important question.  But the more important question is whether or not he is a ‘natural born Citizen’ because he was born in Hawaii. The conventional wisdom is that if he could produce a birth certificate showing that he was born in Hawaii, that would make him a ‘natural born Citizen.’  That’s not true; that only makes him a citizen by birth, and there’s a distinction between the two terms…”

He continued by differentiating that a “citizen by birth” obtains U.S. citizenship by virtue of his place of birth within the United States. if his “parents were here lawfully” and he is “subject to the jurisdiction thereof,” as the 14th Amendment states.  “Now, most people think that’s a definition of a ‘natural born Citizen,’ but people forget that that was put into the Constitution not for the purpose of defining what a ‘natural born Citizen’ is as it applies to the President of the United States, but it was placed in the Constitution for the specific purpose of declaring that people who were part of the newly-freed slave class were citizens of the United States…”

“What is a ‘natural born Citizen?'” Titus asks at 3:10.  “Another way of putting it is there is a law of the nature of citizenship.  If you’re a natural born Citizen, you’re a citizen according to the law of nature, not according to any positive statement in a constitution or in a statute, but because of the very nature of your birth and the very nature of nations and your relationship to the nation as a citizen…If you want to find out whether someone’s a natural born citizen, go back and look at what the law of nature would be or would require in order to be a citizen by birth, and that’s precisely what a natural born citizen is [is] one who is born to a father and a mother, each of whom is a citizen of the United States…”

As a result of the release of the White House birth-certificate image and Obama’s reported father’s status as a non-U.S. citizen, Titus said, “Obama doesn’t qualify as a natural born Citizen for the office of presidency.”

In Part 2, which lasts just over two minutes, Titus contends that the natural born Citizen requirement applies solely to the nation’s chief executive because “the president is the chief constitutional officer of the United States.”  The Framers, Titus said, wanted to ensure that the president harbored no “divided loyalty based upon a mother or a father being a citizen of another nation.”

What is the Connection between a Flynn Amicus Brief and the “Natural Born Citizen” Issue? added on Wednesday, June 24, 2020

12 Responses to "What is the Connection between a Flynn Amicus Brief and the “Natural Born Citizen” Issue?"