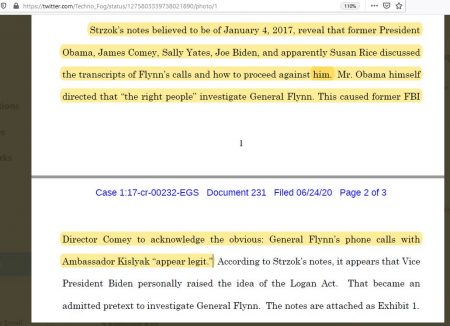 (Jun. 24, 2020) — A document released after a three-judge panel ordered the federal judge overseeing the case against Lt. Gen. Michael T. Flynn (Ret) to dismiss the charge against him states that “former President Obama,” who was in the Oval Office during the time in question, urged that “the right people” be utilized to investigate Flynn’s actions during the presidential transition.

Twitter user and attorney “TechnoFog” tweeted links to the court filing authored by Flynn’s attorneys after the 2-1 appellate decision was announced late Wednesday morning, along with several other close observers of the case.

Documents declassified last month by then-Acting Director of National Intelligence (DNI) Ric Grenell showed that Flynn’s name was “unmasked” dozens of times by Obama-regime intelligence officials during the transition period.  The substance of some of Flynn’s calls with then-Russian Ambassador Sergey Kislyak were leaked to The Washington Post and publicized, creating the appearance that Flynn lied to then-Vice-President-Elect Mike Pence about his calls with Kislyak.

On December 1, 2017, Flynn entered a “guilty” plea of lying to the FBI which he later reaffirmed in U.S. District Court in front of Judge Emmet Sullivan, the judge who recently sought to investigate the Justice Department’s request to drop Flynn’s prosecution following Justice’s own investigation into Flynn’s prosecution which found evidence against him lacking.

Although Flynn and the prosecution agreed on the dismissal, Sullivan sought outside amicus curiae and appointed a retired federal judge, John Gleeson, to take an opposition position to Justice’s, setting a July 16 hearing date to evaluate the arguments.  According to the Associated Press, that hearing will not take place given the appellate panel’s opinion.

Previously reported is that former FBI Counterintelligence Deputy Assistant Director Peter Strzok insisted on January 4, 2017 that a probe of Flynn concerning his alleged connections to Russia continue despite line agents’ recommendation that it be closed.  Twenty days later, Strzok and fellow FBI agent Joseph Pientka conducted an ad hoc meeting with Flynn in the West Wing without following the customary protocol of arranging the meeting through the White House Counsel’s office.

Strzok’s notes believed to be of January 4, 2017, reveal that former President Obama, James Comey, Sally Yates, Joe Biden, and apparently Susan Rice discussed the transcripts of Flynn’s calls and how to proceed against him. Mr. Obama himself directed that “the right people” investigate General Flynn. This caused former FBI Director Comey to acknowledge the obvious: General Flynn’s phone calls with Ambassador Kislyak “appear legit.” According to Strzok’s notes, it appears that Vice President Biden personally raised the idea of the Logan Act.That became an admitted pretext to investigate General Flynn. The notes are attached as Exhibit 1.

The additional notes say that Flynn’s calls with Kislyak “appear legit.”  Ultimately, Flynn was not prosecuted under the Logan Act, a 1799 law which has never successfully procured a conviction. 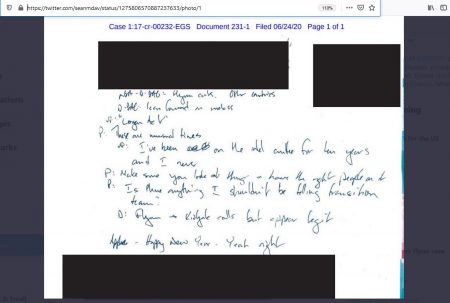 On Tuesday, Trump accused Obama of “treason,” which the mainstream media said was “without evidence.”

In early 2012, an image said to represent Obama’s “long-form” birth certificate posted on the White House website was reported to be a forgery beyond any reasonable doubt, along with his Selective Service registration form.  The media has failed to report the “evidence” gleaned over the five-year investigation conducted by former detective and former private investigator Mike Zullo, working under the authority of the Maricopa County Sheriff’s Office (MCSO).