OF CENSORSHIP AND CONSPIRACY THEORIES 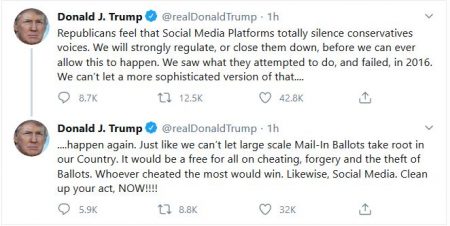 (May 27, 2020) — Shortly before 8:00 AM EDT Wednesday morning, President Donald Trump addressed himself to social-media platforms in general by tweeting, in two parts, “Republicans feel that Social Media Platforms totally silence conservatives voices. We will strongly regulate, or close them down, before we can ever allow this to happen. We saw what they attempted to do, and failed, in 2016. We can’t let a more sophisticated version of that……..happen again. Just like we can’t let large scale Mail-In Ballots take root in our Country. It would be a free for all on cheating, forgery and the theft of Ballots. Whoever cheated the most would win. Likewise, Social Media. Clean up your act, NOW!!!!”

Trump did not elaborate on how his administration might “regulate, or close down,” social-media platforms. However, on Tuesday evening, he indicated his displeasure with Twitter for, according to Trump, “interfering in the 2020 Presidential Election.”

There, Trump was responding to Twitter’s launch of a purported fact-checking operation in which the platform refuted Trump’s claim that the utilization of mail-in balloting to conduct voting on a large scale would result in election fraud.

While in Congress from 1995 to 2001, Scarborough represented Florida’s First Congressional District, now represented by Matt Gaetz.

According to govtrack.us, Scarborough’s voting pattern fell roughly in the middle of the “conservative ideology” but showed a higher-than-average absence when it came to casting a vote.

The request to Twitter was made in a 2½-page letter from the widower of Lori Klausutis, who reportedly was found deceased in Scarborough’s congressional office on July 21, 2001 at the age of 28. Her death was stated to have emanated from an undetected congenital problem which caused her to fall and strike her head, causing fatal trauma.

Beginning in 2018, various congressional committees held hearings on alleged social-media censorship which some in the mainstream media claimed were based on the perpetration of “conspiracy theories.”  The same was said about claims that Barack Hussein Obama is not a “natural born Citizen” and therefore ineligible for the presidency, and that his purported “long-form” birth certificate is a forgery as determined by a five-year criminal investigation conducted under the authority of the Maricopa County, AZ Sheriff’s Office.

In his tweets suggesting an investigation be opened involving Scarborough, Trump did not name the deceased.  However, her husband wrote in his letter to Twitter CEO Jack Dorsey that the comments were hurtful to him and his wife’s surviving family members.

In February, YouTube, a subsidiary of Google, banned videos covering “eligibility” for elected office and “birtherism.”  Facebook has also been accused of censorship of “conservatives.”

One Response to "Trump to Social-Media Outlets: “Clean Up Your Act, NOW!”"