IS THIS THE “BIG ACTION”? 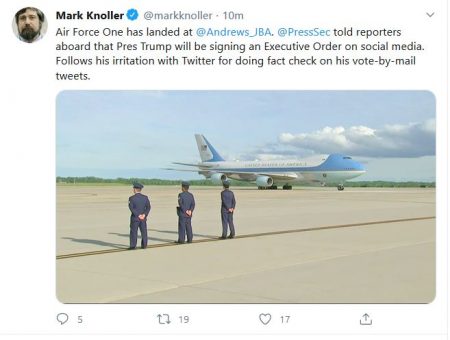 (May 27, 2020) — 6:33 PM EDT — Several minutes ago, Mark Knoller of CBS News tweeted that according to White House Press Secretary Kayleigh McEnany, President Trump will issue an executive order relating to what he says is censorship of right-leading commentary, likely prompted by Twitter’s efforts to “fact-check” two of his recent tweets.

As The Post & Email reported earlier, Trump tweeted Wednesday morning that he would not “allow” social-media companies to stifle “conservative” speech against the backdrop of the 2020 presidential election, four years after he said the same platforms practice censorship in his first presidential campaign.

“Republicans feel that Social Media Platforms totally silence conservatives voices,” Trump tweeted shortly before 8:00 AM EDT. “We will strongly regulate, or close them down, before we can ever allow this to happen. We saw what they attempted to do, and failed, in 2016. We can’t let a more sophisticated version of that……..happen again. Just like we can’t let large scale Mail-In Ballots take root in our Country. It would be a free for all on cheating, forgery and the theft of Ballots. Whoever cheated the most would win. Likewise, Social Media. Clean up your act, NOW!!!!”

Early Wednesday afternoon, the senior U.S. Senator from Connecticut, Richard Blumenthal, claimed at a press conference highlighting a mobile COVID-19 testing unit in New Haven that Trump’s response to Twitter’s “fact-checking” of his tweets was that Trump “threatened to shut down the Internet.”

No media entity airing the presser challenged Blumenthal on his statement.

As of press time (6:50 PM EDT), Trump’s Twitter timeline does not hint at an executive order, but rather, states that he is planning to veto a “FISA” bill which the U.S. House of Representatives may pass this evening with some members voting “by proxy.”

Update, 6:53 p.m. EDT:  Moments ago, Knoller tweeted that the “press pool” traveling with the president reported that according to McEnany, Trump will not sign the executive order Wednesday evening, but rather, on Thursday.

One Response to "Report: Trump to Sign “Executive Order” on Social Media Platforms"